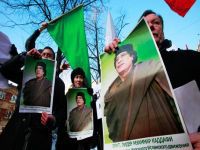 After failing a compaign to bring down the Ghaddafi government by force, NATO now attempts to bring it down by political negotiation. However, they fail to comprehend, or at least pretend they don't comprehend, that losers don't dictate terms for the end of a war, particularly if you were the aggressor.

What NATO did was supervise and assist the looting, ransacking and wanton acts of murder committed by their land based mercenaries, read terrorist occupation forces, trained and armed by them. NATO countries and lackeys also arrogantly committed grand larceny, stealing the wealth of the Libyan people.

They merrily and happily dropped bombs on civilians and civilian infrastructure while pretending their purpose was to "protect civilians." What they did was the exact opposite. They bombed indiscriminately like a petulant child that couldn't have their way having a temper tantrum because that shiny toy wasn't theirs to take.

They so flagrantly violated the resolutions they used as a pretext for the campaign, that they murdered the son and young grandchildren of Muammar Ghaddafi in the attempt to murder him personally. They were willing to do anything and everything, and to kill anyone, in order to kill him.

Their lies and false flag operations were easily discovered as such. Try as they might, they could not hide the truth about their campaign of disinformation and deception. This was a main thrust of their efforts. But the mainstream corporate media that put themselves shamelessly at their service failed miserably.

Libya was not to be a Hollywood production. They couldn't keep a million Libyans off the streets that demonstrated defiance and their support for their government and way of life. A people united, determined and willing to die before allowing their country to be taken over by imperialist, colonialist powers, cannot be defeated.

NATO overestimated themselves and underestimated the Libyan people and their leader. There was no way for NATO to win this war, no matter how much military hardware they tried to throw at the place. 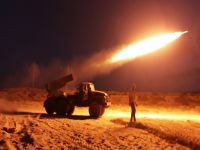 After nearly 5 months, it finally began to dawn on these military geniuses. Now they are still insisting on getting their way in the negotiation process. "He must go, he must leave power."

What kind of respect does that show for the will of the Libyan people? None at all. NATO and their terrorist friends totally rejected the idea of elections, knowing they would suffer a tremendous embarrassment as the people would again give legitimacy to their leader and government. These NATO sponsored terrorists represent no one but themselves.  Another disaster for them they couldn't bear.

Ghaddafi said should he lose the election, he would step down. Of course we all know what will happen.

The proposal had also included everyone imaginable to verify the election results. So much for freedom and democracy. No to elections, all they care about is dismantling Libya's way of life. No self determination, just theft of resources, installing anyone without benefit of elections, even the devil himself, to be the proper puppet who will deliver.

Now is the time to remain firm. People who start wars and conduct them illegally and unsuccessfully do not dictate terms. Their mercenaries were unable to achieve anything besides murder, looting, mutilation, pillage and wanton destruction.

NATO shut up. NATO go away. NATO take your marbles and shove them where the sun don't shine. For all of your self aggrandisement about your superior fire power, it was still not able to overcome the simple power of the human will to prevail, to protect and preserve their own country and way of life.

NATO will not and cannot pick up where the colonialists of days gone by left off. Africa refuses to be their colony, their slaves, their victims. Learn for once to leave people alone. Don't try to hog everything for yourselves, the planet Earth was not created for you to plunder at will or for the one percent to gorge themselves so that the ninety-nine percent can live in poverty, destitution, misery and deprivation.

Just declare that you successfully implemented a no-fly zone and fly away never to be seen again on the face of this planet. You are universally hated and despised by all decent members of humanity. The death of NATO will be a cause for universal rejoicing.