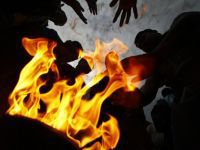 We have all heard of intervention journalism, whereby opinion makers shape public opinion through teaching the facts against tides of misinformation and demonology practised by the "mainstream" media which serves corporate interests. What about intervention prayer for peace?

Is it cool to kill?

"Thou shalt not kill" is a fundamental precept, being the rule of respect for human life (and in the Qu'ran, all life in general - indeed it goes one stage further) which permeates through everything which is decent, morally acceptable and civilised in today's world, much more so at the beginning of the twenty-first century.

How, then, does one justify the act of slaughter perpetrated by NATO in Libya and how does one contextualise this demonic impulse in today's world and harmonise it with the religious precepts mentioned above? To be succinct, one does not, because one cannot.

The purposeful targeting of civilian structures with military hardware is a constant factor in the equation which composes NATO, whose campaigns and war crimes go hand in hand and whose leaders perpetrate such outrages with impunity because The Hague Tribunal does not try NATO countries...does it? Right! Because it is not a Tribunal, it is an insult to international law and its staff are the lackeys of the evil which is destroying the principles of international due process.

The purposeful targeting of a civilian house where the Libyan Brother Leader was staying, visiting his son and grandchildren, an attack with a bomb launched from 30,000 feet by a NATO aircraft under orders from the NATO leadership, was an act of the most indescribable evil, a sheer act of demonic and sadistic cruelty almost unthinkable in the mindset of Humankind today. Muammar al-Qathafi was outside feeding the animals when this massacre took place, burning his son and three grandchildren alive.

In which religion is it justifiable to target children? Christianity?

Now where, in any religion, is this justifiable? In the case of Libya, it is not an eye for an eye or a tooth for a tooth because Libya had not attacked those attacking it, in fact, Libya and Libyans were sitting quietly at home enjoying their prosperity, when NATO armed and aided thousands of separatist and extremist thugs in Benghazi, endemically separatist (and why was there no "rebellion" in the capital city, Tripoli, and why are there demonstrations in favour of Gaddafi there of over one million people, in a total population of six million?).

This NATO act of slaughter against innocent civilians, against the Libyan Armed Forces who are defending themselves against terrorists trained by Al-Qaeda (as their leader Abdel-Hakim al-Hasidi has admitted) is not only fundamentally wrong, it is an act of sheer unadulterated evil. Libya's reaction was to request that NATO withdraw and to refrain from acts of retaliation, well within its grasp. Colonel Gaddafi declared in a public speech last Friday "Let's give them a chance". This is called measured foreign policy.

Lawyers are drawing up cases against Cameron, Sarkozy and Obama for war crimes. The blood of those children is on their hands, the screams of those children are ringing in their ears, the lives of those children will weigh on their souls until the Day of Judgement, when these three will burn for eternity in Hell. If God hates a murderer, God loathes a child murderer.

Journalists from the mainstream media are beginning to see the truth and are starting to refer to reports and documents drawn up by independent bodies which conclude that Gaddafi himself was going to receive a humanitarian prize from the UNO in March for his good record; they conclude that the "rebels" are based on separatists and Islamist fundamentalists who have been whipped up by external pressures and these same reports conclude that the entire campaign is based around greed - the wish to take Libya's oil and the desire to recolonise Africa (because Gaddafi was successfully implementing the African Union).

So what can the people of the world do, those decent people who believe in morals and who believe in good and what is right, those who believe in God and follow a religion and work for the community, helping and sharing? These are the backbone of Humankind, these are the anonymous good people, the type of human being God meant us to be.

We can launch a movement more powerful that the Ocean currents, more devastating than the strongest hurricane and more all-consuming than a tsunami: intervention prayer for peace. Let us pray to our God for peace, let us pray for the souls of those slaughtered in their homes by NATO, let us pray for the people of Libya heroically fighting thousands of armed Islamist extremists, who in turn are helped by NATO. Let us pray that these terrorists and their NATO paymasters see the errors of their ways and listen to the calls from the Libyan government to put down their arms and talk for peace.

Let us pray that our God makes these NATO leaders see the evil in their actions, let our God make them feel the weight of their murderous acts in their conscience, let us pray that they realise what they have done and make their hearts heavy with shame. Let them bow their heads in humiliation at purposefully blasting away a family with bombs then repeating the act time and time again, massacring children and women and old folk alike in their greed for oil and determination to aid the terrorists who tomorrow they are going to control as Colonial masters.

Let us pray to our God to help the noble Libyan people and their leaders to have the resilience to fight this scourge, this spawn of Satan and let us make our voice heard in our communities and in the politicians who represent them in our organisms of Government - and if they are in favour of these Satanic despicable acts, then we will never vote for them again.

Satan belongs in Hell, not on Earth. Ask your Representative/Member of Parliament where he/she stands on this racist and demonic assault against Libya and Africa and ask your representatives where they stand on acts of war and murder. YOU are the ones who pay for their fat salaries and ultimately, by association, are guilty alongside them.