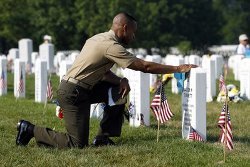 Annually America's warrior tradition is commemorated in major media editorials and op-eds, honoring fallen men and women for reasons not explained. More on that below.

On May 29, The New York Times headlined, "Among the Graves This Memorial Day," saying:

The Chicago Tribune headlined, "Hoist a glass for Red," saying:

Red Madsen and others like him "gave portions of their lives to warfare but survived. This day is theirs too," stressing shared sacrifices they all made "defend(ing) this country," leaving unexplained that America's war are imperial, unrelated to defense.

It was mostly reflective boilerplate until the final thought, recalling an earlier Wiedorfer comment, saying:

"Wouldn't it be wonderful if the Medal of Honor didn't exist because there were no wars and we could all live in peace?"

"On this Memorial Day, we honor the generations of Americans who have fought and died to defend our freedom....From Gettysburg to Kandahar, America's sons and daughters have served with honor and distinction, securing our liberties and laying a foundation for lasting peace."

Waging multiple imperial wars, ready plans for others, and numerous proxy ones, his hypocrisy requires no comment, desecrating the graves he pretends to honor.

Memorial and Veterans Days of Shame

Commemorated on the last Monday in May, Memorial Day was first observed in 1866, called Decoration Day in 1868. In 1967, federal law officially made it the time to honor America's fallen men and women. More on that below.

Veterans Day was formerly Armistice Day (Remembrance Day in Europe), commemorating WW I's end on the 11th hour of the 11th day of the 11th month of the year in 1918 when guns on both went silent, or were supposed to. First observed in America in 1919, it became a legal holiday in 1938. In June, 1954, Congress changed its name to Veterans Day.

Both days, in fact, dishonor America's war dead, omitting why they fought and died in vain, sacrificing their lives for imperial conquest, plunder, and new ones in an endless cycle of gratuitous violence, militarism, brutality, and destruction for power and profit.

Comfortably at home during hostilities, America's privileged, in fact, let others do their dying for them, making the world safe for bankers, war profiteers, and other corporate favorites, sending innocent youths to conflicts based on lies, duplicitously saying it's for freedom, democracy, and humanitarian concerns.

In fact, it's for wealth and power, nothing else, conquering, colonizing, and exploiting resources and people ruthlessly, shifting from one theater to another, satisfying an insatiable desire for more, sucking life out of countries one at a time or several simultaneously, an American tradition from inception.

As a result, these holidays warrant special condemnation, representing a galling legacy of perpetual wars, false patriotism, and unattainable peace, the very notion intolerable to America's leaders for generations, notably since WW II.

These days, in fact, testify to the nation's depravity, commemorating the ultimate crime by wasting human lives, ignoring Lincoln in November 1863 at Gettsburg, saying:

"(W)e here resolve that these dead shall not have died in vain, that this nation under God shall have a new birth of freedom, and that government of the people, by the people, for the people shall not perish from the earth."

The horror of America's Civil War still continued, finally ending on June 22, 1865, the day the last shot was fired, weeks after another killed Lincoln on April 22 that year.

Both, in fact, metaphorically reflect endless death, destruction, and human suffering wars guarantee, at times consuming presidents, but mostly deceived youths sent to battle for reasons unexplained, not the fabricated ones used to rally them.

Future commemorations should chart a new course, vowing never again and meaning it. Remembrance should be an act of contrition and path to redemption, honoring the living, pledging peace, non-violence, equity and justice by leaders backing rhetoric with policy.

Perhaps one day new generations will wonder why older ones fought wars, they long ago renounced. If so, commemorating dead and living warriors may be replaced by a Peace Day, honoring sacred life so dead soldiers didn't die in vain. Pray it comes in time to matter.