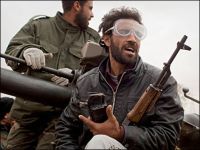 People Power! Can you make a difference, can you contribute towards stopping NATO's illegal and murderous policies in Libya, can you force the murderers and war criminals Cameron, Obama and Sarkozy to reconsider? Yes, you can! Here is how you can make a difference and translate the outrage in the international community into concrete action.

Here is a list of the clique of nations perpetrating military strikes against the Libyan authorities, in direct and illegal support of armed rebels in a sovereign nation, against whom the Libyan government has the right, under international law, to defend itself: Belgium, Canada, Denmark, France, Italy, Norway, Spain, the United Kingdom, the USA.  Muammar al-Qathafi's forces are not attacking unarmed civilians, they are fighting armed Islamist rebels.

These rebels are led by a man called Abdel-Hakim al-Hasidi, arrested in Pakistan for fighting with Al-Qaeda against the USA and UK, and responsible for shipping Benghazi-based suicide bombers to Iraq also to fight against NATO forces. What do Obama and Cameron do? They side with him in Libya, taking the side of terrorist Islamist fanatics fighting the government, then lie and twist the facts claiming Gaddafi is the tyrant. They have sided with the same forces killing their own troops and they are wasting millions of dollars of your money in so doing. They are also guilty of murder and attempted murder. And they are barefaced blatant liars.

Muammar al-Qathafi (Gaddafi) was to be awarded a humanitarian prize for his great humanitarian record in March by the UNO. His work in helping the African continent free itself from imperialism is second to none. He helped the ANC defeat apartheid, he helped countries free themselves from colonial masters and he developed systems giving Africans access to the Internet wherever they may be, developed e-learning and telemedicine programmes. He also took his country from the poorest in the world to the richest in Africa, while taking little or nothing for himself.

What can you do?

1. Inform yourself, if you do not believe this article, about the great work Muammar al-Qathafi has done for Libya and for Africa;

2. The countries involved in this criminal attack against Libya are the following: Belgium, Canada, Denmark, France, Italy, Norway, Spain, the United Kingdom, the USA. The legality of these military operations is wide open to prosecution inside these countries. Without a formal declaration of war, it is illegal to murder and to attempt to murder people, leaving the leaders of these states open to prosecution for these serious crimes;

3. Boycott these countries and their products;

4. Send a message to your elected representative (Member of Parliament, Congressperson, etc.) and ask firstly whether he/she supports his/her nation's attack on Libya. You have the right to know their position and they have the obligation to answer.

After receiving the answer, then send the following questions:

a). You say you support our country's attack against Libya. Are you aware that under international law, this is illegal?

b). Are you aware of who was the first international leader to issue an arrest warrant against Usama bin laden and Al-Qaeda? (Answer: Gaddafi)

c). Are you aware of the tremendous work Muammar Gaddafi has done for his country and for the African Union?

d). Do you agree with the murder of Gaddafi's grandchildren by this country's military forces and do you accept that the leader of this country is therefore a murderer and a war criminal?

e). Do you know how much this is costing our taxpayers? (answer: 50,000 USD per aircraft per hour times the number of missions). Post the answers to the email below. Time to name and shame.

5. Sign and send this petition to your friends and contacts