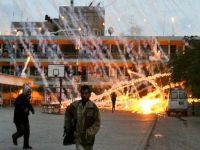 Israel's Prime Minister Benjamin Netanyahu has just insulted the President of the United States of America and has just insulted the people of the United States of America, refusing to accept international law and insisting on a belligerent policy which is bound to reach a flashpoint. Why should the USA continue to support a regime which defies international law?

The bottom line for Israel is, OK do what you want but do not then involve others in the situation you have created and do not ask for help and support and aid from others when your own sheer pig-headed arrogance blows up in your faces.

Israel was created back in 1948 on a wave of public sympathy due to the disgusting treatment meted out to Jews during the second world war in countries like Estonia, Lithuania, Latvia, Poland, Hungary and of course Germany itself. The more horrendous side of human nature was visible in the concentration camps, such as Jasenovac in what is now Croatia, where Serbs and Jews were massacred.

Israel was back then happy with its frontiers. Now it is not, because in the words of Benjamin Netanyahu, the pre-1967 borders (when Israel seized the West Bank, the Golan Heights and the Gaza Strip) are "indefensible".

What a load of codswallop, what a pack of lies, what an insult to the international community

This is where Israel loses it

Right or wrong, there comes a time in vectors affecting international relations, a critical moment, a focal point, a flashpoint, which is identified as the moment when a cause was lost or gained. The USA lost all right or reason was when it committed the greatest act of nuclear terrorism known to humankind in Japan in 1945 (Hiroshima and Nagasaki), reiterated by the snivelling retreat from Vietnam two decades later, the quagmire hydrated by the disasters in foreign policy and international relations provoked by the illegal (yet understandable, given the backdrop of 9/11) attack against Afghanistan, the illegal act of butchery against Iraq and now, clear for all to see, the hideous and flagrant human rights crimes against Libya.

Milosevic lost it when he was perceived to be committing human rights crimes against Kosovar Albanians. Nobody is saying he was, in fact he was fighting against Islamist terrorists and agents provocateurs, as anyone who received the darling Kosovar Albanian refugees across Europe will vouch for - a worse scourge has rarely been seen in the annals of human history.

Yet the international press called Slobodan Milosevic the Butcher of the Balkans. For those who believe this nonsense, Google up "Serbs severed heads" and see the images. Do the same for "Israel war crimes".

Israel lost it when Benjamin Netanyahu refused to accept the olive branch crafted by Obama (who let down millions of people worldwide with his murderous and despicable attack against Libya), when Obama said that the way forward was for Israel to live within the borders drawn up when the state was created in 1948. However despicable Obama's own record, and however much he desecrated the Nobel Peace Prize he received by slaughtering Libyan children and launching a cowardly attack against Muammar al-Qathafi, as far as Israel is concerned, he was right.

Sorry, Mrs. Brown, we do not have money for your operation. Sorry, Mr. Gomez, we cannot accept your son into this program, sorry Miss Harrington, the State does not have funding for your treatment. (But hey, we have billions for Israel, whose Prime Minister insults our President, our country and our people).

Could it be that for once, the people of the USA will hold their President and Secretary of State to account on Israel? Or will they sit back slumbering and wallowing in the quagmire their political class has prepared for them, allowing Clinton to rule the roost backed by AIPAC and pretending that Obama is anything other than a shadow of a man?

Photo: A Phosphorous attack against a Palestinian school, denied by Israel, but the camera does not lie