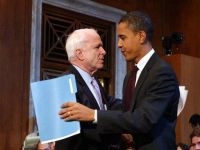 When John McCain of the same political party which committed war crimes under the Bush regime says he likes the Libyan rebels, then something stinks. When John McCain calls a group of "rebels" his heroes, then it reeks. Ladies and Gentlemen, welcome to another Iraq.

Same players, only this time France on board. USA, UK and Freedom Fries champions, France. Vive La France, when oil and business interests flow. But with McCain, the darling of the Bush regime, on board, then it is patently obvious that the Libya story morphs into a new ball game.

The Republican party Senator visited Benghazi, the hub of the Islamist terrorist "unarmed civilians/rebels" supported by NATO just like the Albanian terrorists a decade ago, this Good Friday and declared that these brigands are "my heroes".

Well they would be would they not? They serve the neo-con plan rather well - destroy civilian structures just like in Iraq then dole out billionaire rebuilding contracts to White House cronies - and what has changed? After all those who surround Obama are the same ones responsible for the banking crisis.

McCain, obviously, was one of those backing a military strike against Libya. Yet this failure backed the losing side, again. The US military opines that a stalemate has been reached, with the country divided in two.

Nice one, NATO. Another foreign policy disaster, another act of interference into the affairs of a sovereign state, and another long, protracted act of murder and destruction.

Let us be honest - if McCain is involved, something reeks. Stand by for added military intervention and the sudden shifting of the game plan, called "Mission Creep". United Nations Organization - HELP! Yet another assault upon the precepts on international law. And another good pointer towards how Obama has been assimilated by the system.