Is China dealing in stolen property? 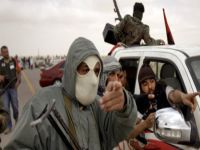 If some ordinary guy off the street knowingly buys something, like a watch or a television or a DVD player from a fence that sells stolen property cheap...he is liable to be prosecuted and go to jail. But if the buyer of stolen property is a huge, powerful country...are the world's policemen going to smile, pat him on the back and even facilitate the crime? This is exactly what they are in the process of doing.

Such is the case just reported that China has the tanker, Equator, registered to Greek operators, Dynacom Tankers Management Ltd, on its way, delivering 80,000 tonnes of Libyan crude oil.

So far they are being all slippery about it, saying the destination is China but "they don't know who the buyer is." Well fat chance it's anyone but China.

What's wrong, China? Don't want to be accused of the crime of aiding and abetting in the theft of oil belonging to the Libyan people? Grand larceny? An accessory after the fact to the felonious theft of Libyan oil? What sort of "Communist" country aids in the theft of the people's oil and makes it a highly profitable venture?

Perhaps now we see a reason for China's abstention at the UN Security Council. They would be given the first piece of the pie. Shame on you, China, aren't you worried about losing face before the world?

The fencing agent is reportedly called Vitol, who will act to make the transfer of funds via an offshore account.

It will take 28 days at sea for the stolen property to arrive at its destination, IF it arrives, which hopefully it will not. Time for someone to point out: that oil belongs to the PEOPLE OF LIBYA, not mercenaries, not terrorists and agents of Al Qaeda, the CIA and other foreign intelligence services...whose first task in their so-called rebellion was to steal Libya's oil above all else, forget "freedom and democracy" we're in the oil stealing business.

These criminals don't even try to hide it anymore or pretend. They do it right out in the open and are proud of it.

The Libyan people may never again see a single payment for the oil that rightly belongs to them. Under Ghaddafi, the oil revenues were distributed among the Libyan people, as it is their property and everyone gets a share.

If that oil is allowed to be stolen, may it curse all who commit the crime, whether it be in the actual theft, transport, payment process or the buyer who, after all, makes it all worthwhile.

Nudge, nudge, wink, wink...the corporate mainstream media treat the theft as though it's good news, the most natural thing in the world, oh my, the oil is starting to flow again. Never mind that it was the fault of the terrorists for it being interrupted in the first place.

It takes a thief to know a thief and so they're all criminals and they're all in on it and the world sits back apathetically as though they are all, to quote Gogol, "Dead Souls." No one cares about right and wrong or international law anymore.

How many more Libyans and Africans have to die to supply the ravenous greed and appetites of these global criminals who use the obsolete NATO and the incompetent UN as their battering rams and enablers? What do you fascists have to say for yourselves?