U.S. Imperialists: "All Options on the table"

Sarkozy and the other hypocritical clowns of the west 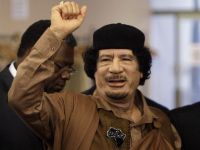 When I hear members of the U.S. administration say that "all options are on the table" I feel highly tempted to tell them exactly what they can do with that table and where they can shove it. The reeking, oozing hypocrisy of U.S. and western officials is enough to make you want to slap them silly. Now Hillary Clinton announces proudly that she is to meet with terrorists operating in Libya this coming week. How quaint.

As we have been reporting in this space, most everything the western corporate mainstream media has been reporting about Libya has been lies and fabrications. They accuse Quaddafi of all kinds of crimes while they themselves are involved in crimes against peace, crimes against humanity: torture, destruction of the environment, attacking civilian infrastructure and wanton murder of innocent civilians.

Nothing is said or done about the crimes committed by Israel in Lebanon and Palestine which, despite having being condemned by the United Nations, have never been considered by the United States or NATO for a possible armed intervention, much less "no fly zones."

Let's cut the nonsense and get to the truth. Oil - Europe and America are being crippled and devastated by rising prices...

Libya's high-quality, low-sulfur oil is not that easily replaced by the sulphur-heavy Saudi oil, particularly in Europe, which is short of refineries. Indeed, the immediate boost needed to keep supplies steady would be more likely to come from the strategic reserves of the U.S., Europe and Japan, all of which keep 90 days' supply in stock to deal with dire emergencies.

Bottom line is they want the oil and the re-establishment of colonial domination. No one in the west will hear anything good said about the leader of Libya or how his country's people are better off than all in Africa and many in Europe.

In an interview with an independent European forum, a Middle Class Libyan stated: "Everyone was happy here. Anyone could get an interest free loan and no one was hungry." You will never hear this kind of interview in the western corporate media, but you will hear interviews of agent provocateurs, members of the armed insurrection crying about how badly they are being hit in order to obtain foreign intervention.

One of the main leaders of the opposition to Gaddafi, Khaled Maass, in the region of Cerinaica confirmed that he was giving up the fight and does not agree with the participation of mercenaries and American military against Gaddafi on Libyan territory, and that in no event will he contribute to the CIA, which now begins to take along with Al Qaeda command of the situation in the region of Cyrenaica.

In an act of foolhardy utter arrogance, Nikolas Sarkosy has decided to recognise some rag tag group of leaders as the "Libyan government," and for what reason we might ask. The announcement came after President Nicolas Sarkozy met with two representatives of the terrorist armed insurrection, Mahmoud Jibril and Ali Al-Esawi.

Perhaps Sarkozy found it attractive to do this because of his miserable standings in the polls. His disapproval rating climbed to 71 percent from 69 percent in February, perhaps he thinks his idiotic behavior will make the French see him as some sort of Napolean Bonaparte or Charles De Gaulle. Fat chance.

Perhaps he wants people to forget his shady, questionable personal life or the investigations about gross irregularly in campaign contributions.

Perhaps Ghaddafi can choose some new separtist leader as the leader of France as well?

Brittany and the Breton people can now take control of their independent territory, as can the huge Muslim enclave there take a slice of La France for an independent state.

While we are at it, let's go find the chief of the Lakota Indians and declare him the supreme ruler of the U.S.A.

The thing is, these pseudo-humanitarians pushing that "something be done" are fooling no one. This push for military intervention has nothing to do with democracy and freedoms.

The stench of western lies began the campaign for Libyan oil. The media presented false pictures. It was proven they tried to pass off pictures of what was happening in other countries saying it took place in Libya. Then there were the bogus claims of "he's bombing his own people."

The Russian secret service confirmed by spokesman, Nikolai Patrushev, that there is a "bombardment" of the international media against Gaddafi. Because Russia monitors all the airspace of North Africa and one hundred percent of Libya and the planes allegedly said that took off to run the air strikes against the Libyan people did not leave the ground and therefore did not perform any military action, including bombing their own people. There are no images of any flights as claimed by the Pentagon.

The U.S. Secretary of Defence admitted the error saying that the information may have been other aircraft, but independent sectors of the international media had already put the news of the Russian findings out, and so demoralized the action of the Pentagon.

The latest lies as Libyan forces take back their country are the makeshift treatment centers for terrorists where they are accusing Libyan forces of "destroying hospitals." We will not be fooled.

To remind: Libya occupies the first spot on the Human Development Index for Africa and it has the highest life expectancy on the continent. Libya attained the highest per capita income among African states. Libya enjoys the highest gross domestic product (GDP) at purchasing power parity (PPP) per capita of all of Africa.

The quality of life is over a hundred times better than it was when he took over in 1969, when he instilled a policy of control of Libyan resources by Libyans for Libyans, then literacy rates rose from 10 to 90 per cent.

Education and health receive special attention from the State. The cultural level of its population is without a doubt the highest. Everyone has a home, can afford cars and all the necessities of life. In short, Gaddafi has constructed a new sort of society, one that works very well and one where the people participate.

During the global crisis when food prices soared, Gaddafi's government eliminated the taxes in order to make food more affordable.

The construction of a broad network of giant pipelines was undertaken (the "Great Man-Made River") bringing fresh water from an enormous lake beneath its large desert, in order to serve the needs of Libya's 6 million population.

The Grand Plan of Imperialism Unmasked

The future of Libya will not be determined by a few thousand mercenaries recruited from abroad to serve the Great Plan which has existed in Washington/Tel Aviv for over a decade, namely the control of "Iraq, and then Syria, Lebanon, Libya, Somalia, Sudan and, finishing off, Iran." These are not Pravda's words. They are the words of General Wesley Clark in an interview with DemocracyNow!, March 2, 2007.

"The population will be largely unaffected by a no-fly zone," said US Ambassador to NATO Ivo Daalder.

Don't let them fool anyone for a minute. What the Libyan people can expect if these imperialists have their way is exactly what you can see in Iraq and Afghanistan. The total destruction of civilian infrastructure. After all, if you don't bring your government down, we will convince you to do so.

To this day the people are lacking basic utilities and services that they once enjoyed. Clean water and electricity? Forget it! There has been total environmental destruction with the use of depleted uranium and a tremendous rise in cancers.

This is the "freedom and democracy" awaiting Libya. This is what the terrorists, the armed insurrectionists are fighting for. No matter how much western corporate media has tried to scoff and ridicule, it has been abundantly evident that these fighters are CIA, foreign mercenaries and Al Qaeda.

The western developed countries do not want to see others living well as they do now in Libya. So the plan is to knock them down back "where they belong." After all, it is Africa, the DARK continent.

So a final note to western corporate media: we aren't buying anymore of your crocodile tears and sob stories. Your zero credibility has never been more obvious than it has been during this situation.