Is NATO in Libya?

After NATO's acts of terrorism in recent years, after the blatant disregard for human rights and human life when depleted uranium rendered swathes of Yugoslavia uninhabitable and destroyed the futures of hundreds of thousands of Iraqi children, would it surprise anyone to learn that Libya is a NATO campaign? 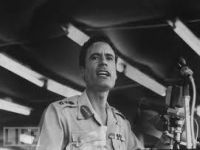 The defeated look of the nine-year-old Iraqi boy who had just been told his entire family had been literally obliterated by a NATO bomb was as unforgettable as the brave smile sported by the six-year-old Iraqi "terrorist" whose limbs and face had been blasted off by e heroic NATO pilot. The victims of NATO, as it perpetrated unspeakable acts of terrorism against unarmed civilians.

Interestingly, the "rebels" in Yemen are not "revolutionaries", but "terrorists": The State Department has raised the security threat level for the country to "extremely high due to terrorist activities and civil unrest". Interesting it is that President Ali Abdullah Saleh, the friend of Washington, has promised to defend his Government against the rebels "with every drop of blood" yet nobody speaks out against him. Where are the referrals to the international penal court? Where are the calls for him to "go now"?

Interesting it is, that in Libya things are so wholly and totally different. Interesting it was that the eastern and western borders were secured (Tunisia and Egypt) over which equipment and men poured, interesting it is that already two teams of NATO special forces have been captured inside Libya (Dutch Navy Force and British SAS), interesting was SKY News' interview with a "front-line rebel" speaking in a broad Canadian accent.

Interesting it is that the professionalism of the western media which supports NATO's terrorist campaigns spread lies, half-truths and mistruths against Muammar Al-Qathafi and his government and expect their viewers and readers to swallow this bilge hook, line and sinker. How many of them referred to the fact that Libya has the highest life expectancy of the African Continent? How many of them have bothered to research and inform their viewers and readers that Muammar Al-Qathafy's "regime" started to distribute the oil wealth directly to the people to combat corruption, giving Libya's people the highest Purchasing Power Parity in Africa?

How many stated that the under-nourished are 5 per cent, lower than many European Union States, how many informed us that to combat rising food prices, the Libyan government abolished all taxes on food, how many of them said that the infant mortality rate in Libya is the lowest in all of Africa?

Interesting it is that amid their anti-Qathafi diatribes, they forgot to tell us that Libya's Human Development Index is the highest of any of Africa's 54 States (counting both Sudans and the Western Sahara, illegally annexed by Morocco), interesting it is that the poverty rate in Libya ranks below that of the Netherlands, and that they declined to explain what Jamahiriya (the Libyan system of Government) means, namely "a state of the masses", governed by the populace through local councils.

Interesting it is that the "revolutionaries", aka "terrorists" are allowed by NATO to mount an armed insurrection yet the same countries which deployed depleted uranium on the children of Iraq and Yugoslavia call for Muammar Al-Qathafi not to fight back.

What is he supposed to do? Give his oil to the West on their terms?