Demonizing the demon in Egypt and elsewhere 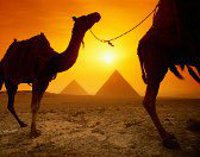 I was personally involved in the movement against the U.S. intervention and bombing of Yugoslavia in the late 1990's under Clinton. At that time I coined the phrase 'Demonizing the demons'. I did so because I noted that progressive and well-meaning people in North America were often befuddled and divided as to whether to support the demonizing of Melosovik by the U.S. government or not.

The real problem was not that Melosovik was, in fact, a demon whose government had engaged in serious human rights violations in Croatia but that he was a demon whose actions had been, in a way, supported or condoned by the U.S. state and media to some extent previously before they decided to demonize and attack him.

At that time, I pieced together the following formula used by the U.S. government and media ever since World War II as a lynchpin of U.S. foreign policy:

Step 1: Actively support, or even instigate, the installation of a demonic dictator or semi-dictator. Especially do so in any case where there is danger of a socialist or even truly independent national government coming to power in a country.

Step 2: Support the U.S.-supported demonic dictator by continually supplying massive amounts of military equipment or funds each for such equipment each year, to prevent any internal opposition from gaining the upper hand. Mubarak in Egypt, for example, received around 1 Billion dollars in military aid each year. Also, impose IMF or other measures designed to advantage international capital, allowing for the looting of the local resources and cheap labour at ridiculously low rates when possible, and conceal or downplay any and all resulting extreme human rights violations and impoverishment of the dictators people;

Step 3: When it is no longer expedient to support the demonic dictator - either because internal opposition has grown too strong, or for geo-strategic or other reasons - then proclaim that he is a 'Demonic Dictator', ignoring the reality that he was installed and maintained in power by yourself.

This scenario of 'Demonizing the Demon' is the formula pursued ever since World War II by the U.S. state throughout the world.

Suharto in Indonesia, Marcos the dictator of the Philippines, Saddam Hussein in Iraq, Mubarak in Egypt, Pinochet in Chile, and many other 'demons' were installed with the support of the U.S. state and its CIA spy service and military aid; maintained in power by tremendous military and other non-socially-beneficial 'aid'; and then 'demonized' and deposed with the help of the U.S. state when they were no longer needed.

The loosers in all cases have been the ordinary people who suffered - first from the Demonic dictators, then from their removal, and then from their replacements (the new demons chosen for them by the U.S. state).

The Egyptian Example:
A few weeks ago the media reported on a possible successor to Mubarak in Egypt as follows: " Mohamed ElBaradei, the former United Nations nuclear chief who has become an opposition figurehead, said he would 'serve if called on' He earlier held his first negotiations with the American and British ambassadors, proposing potential scenarios for a transfer of power"

It could not be any clearer that Mohamed ElBaradei - and the U.S. and British governments - do not really regard Egypt as a sovereign state; rather, they regard these two foreign powers as the real masters - or at least believe they should be the masters - of Egypt's destiny.

In Egypt as elsewhere, the process of installing, propping up, and then deposing 'demons' is the game of U.S. foreign policy. It's high time for the people of the world to put a stop to it.