The Israeli fallacy is over

Revolution in Egypt is bad for Israel 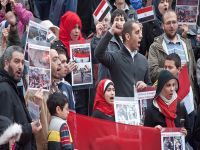 Regardless of how it all ends, (the revolts in Tunisia and Egypt) they have exposed the fallacies of Israel as never before. What is at stake is the fallacy that Israel is a stable, civilised western island in the stormy sea of barbarism and Arab Islamic fanaticism. The "danger" for Israel is that the mapping is the same, but the geography changes. The country would still be an island, but of barbarity and fanaticism in a sea of democratic and egalitarian States recently formed.

The revolutions of Tunisia and Egypt, if successful, will be bad, very bad for Israel. Arabs, polite and educated - not everyone dresses as "Islamic," most without speaking perfect English, whose desire for democracy does not resort to "anti-Western" rhetoric - are bad for Israel.

Arab armies that do not shoot at the demonstrators are just as bad for Israel as are many other images that move and excite so many people around the world, including in the West. This world reaction is bad, very bad for Israel. The Israeli occupation in the West Bank and Gaza Strip, and the policies of apartheid by Zionists within Israel, seem like acts painted as typical of an "Arab" regime.

For some time we were not hearing what Israeli officials thought about the Egyptian intifada. In the first message to his peers, Prime Minister Benjamin Netanyahu told his ministers, generals and politicians to say nothing in public about events in Egypt.

It seems that Netanyahu was particularly embarrassed by the unfortunate comments about the situation publicly uttered by General Aviv Kochav, the head of Israeli military intelligence. A specialist in Arab affairs, Kochav said confidently in the Knesset [Israel's parliament], two weeks before the fall of Mubarak, the dictator's regime was stronger and tougher than ever. So Netanyahu could not keep his mouth shut for long. When he spoke, all the others followed. And when they all spoke, their opinions to the commentators on Fox News [right-wing, known for their virulence] made them look like a bunch of hippies, pacifists and lovers of freedom from the 1960s.

The essence of the Israeli narrative is simple: this is similar to the Iranian revolution, aided by Al Jazeera and stupidly allowed by the U.S. President, Barack Obama, who is a new Jimmy Carter, and by a dumbfounded world. Spearheading the Israeli interpretation are the former ambassadors of Israel in Egypt. Because of their frustrations of having been locked in an apartment in a skyscraper in Cairo, they were now ready to explode like a volcano erupting. Their invectives can be summarised in the words of one, Zvi Mazael, who told the Israeli TV Channel One on 28 January that "it [the Egyptian intifada] is bad for the Jews, very bad."

In Israel, of course, when you say "bad for the Jews," you mean "for the Israelis" - but it also means that everything that is bad for Israel is bad for Jews around the world (despite evidence to the contrary from the foundation of the State).

But what is really bad for Israel is the comparison.

Regardless of how it all will end, [the revolt in Tunisia and Egypt] it exposes the fallacies of Israel as never before. Egypt is undergoing a peaceful intifada - the lethal violence comes from the hand of the regime. The army did not shoot at the demonstrators, and even before the departure of Mubarak, with protests reaching the mark of seven days, the interior minister, who led his thugs in a violent clash against the protesters, was fired and probably will be brought to justice.

Yes, this was done for the government to buy time and try to convince the demonstrators to go home. But even this scene, now forgotten, could never happen in Israel. Israel is a place where all the generals who ordered the massacre of Palestinian and Jewish anti-occupation protesters now compete for the highest office, such as the chief of the general staff of the armed forces.

One is Yair Naveh, who gave orders in 2008 for killing Palestinian suspects even when they could be arrested peacefully. He's not going to jail, but the young Anat Kamm, who made public such orders, now faces nine years in prison for exposing them to the Israeli daily Haaretz. No general or Israeli politician will one day go to prison for ordering troops to fire on unarmed, innocent civilians, women, young and old. The light that radiates from Egypt and Tunisia is so intense that it illuminates the darker spaces of the "only democracy in the Middle East" [as Israel calls itself].

Nonviolent, democratic (religious or not), Arabs are bad for Israel. But perhaps these Arabs were there all the time, not only in Egypt but also in Palestine. Israeli commentators insist that the most important issue at stake - the Israeli peace treaty with Egypt - is a diversion, with little relevance to the powerful impulse that stirs the Arab world as a whole.

The peace treaties with Israel are the symptoms of moral corruption, not the disease itself - and that is why the Syrian President, Bashar Asad, without doubt a leading anti-Israel leader, is not immune to this wave of change. No, what is at stake is the fallacy that Israel is a stable, civilised western island in the stormy sea of barbarism and Arab Islamic fanaticism. The "danger" for Israel is that the mapping is the same, but the geography changes. The country would still be an island, but of barbarity and fanaticism in a sea of democratic and egalitarian States recently formed.

In the eyes of much of Western civil society, the democratic image of Israel disappeared long ago, but now may also have been obscured and tarnished in the eyes of others, politicians and those in power. How important is the old, positive image of Israel to maintain its special relationship with the United States? Only time will tell.

One way or another, the cry of Tahrir Square is a warning that the false mythology of the "only democracy in the Middle East," of the hardcore Christian fundamentalists (much more sinister and corrupt than the Muslim Brotherhood), of the military industrial complex, of the neo-conservatives and brutal lobbies will not ensure the sustainability of the special relationship between Israel and the United States forever.

Even if this special relationship continues for some time, it will be based on even more precarious fundamentals. The diametrically opposed case studies so far resistant to anti-American regional powers of Iran and Syria, and to some extent, Turkey, on the one hand, and the ultimate downfall of pro-US tyrants, on the other hand, are indicative: even if extended, U.S. support may not be enough in the future to maintain an ethnic and racist "Jewish state" in the heart of a changing Arab world.

This could be good news for the Jews, even those who live in Israel, in the long term. It is not easy being surrounded by people who cherish freedom, social justice and spirituality, and sometimes sailing safely, sometimes precariously, between tradition and modernity, nationalism and the worldly, the aggressive capitalist globalisation and daily survival.

However, there is a horizon that carries the hope of triggering similar changes in Palestine. It can bring an end to more than a century of dispossession and of Zionist colonisation, replaced by a more equitable reconciliation between the Palestinians - the victims of these criminal policies wherever they are - and the Jewish community. Such a reconciliation would be constructed on the basis of the Palestinian right of return and all other rights for which the people of Egypt fought so bravely in the last 20 days.

But the Israelis would never pass up an opportunity to lose the peace. They would howl like wolves. They would demand and receive more U.S. taxpayer resources, according to the latest "events." They would interfere in a clandestine and destructive way to undermine any transition to democracy (they remember themselves the force and aggression that characterised the Israeli reaction to the democratisation of Palestinian society) and they would instigate an Islamophobic campaign which would reach new and unprecedented levels.

Perhaps, however, the American taxpayer is not moving this time. And perhaps Europe's politicians were following the general sense of their public and realised that you do not punish an Egypt that was dramatically transformed, but also give a warm welcome to a similar change in Israel and Palestine. In a scenario like this, the Jews of Israel would have the chance to become part of the Middle East and not foreign and aggressive members of a Middle East invented by Zionist hallucinatory imaginations.

(*) Ilan Pappe is a Professor of History and Director of the Centre for the Study of Palestine at the University of Exeter, UK. His most recent book is Out of the Frame: The Struggle for Academic Freedom in Israel (Pluto Press, 2010).