Middle East: Can sport do it?

For several reasons, the Middle East question belongs not only to Israelis and Palestinians, but to the whole of humanity and it is in the interests of humankind that a lasting and peaceful solution is found, creating a two-State system in which both peoples live side by side in peace and mutual respect, with the international community sponsoring sustainable development programmes favouring both sides equally. 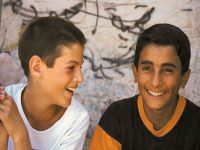 The Middle East question belongs not only to Israelis and Palestinians but to the whole of humanity for several reasons: Humankind has a collective religious identity based in this region, the quest for peace in the Middle East to a large extent dictates world peace in general and finally, the Jewish lobby is so powerful and omnipresent that it has internationalised the issue. If Israel has and controls interests in the international community, then its members have the right to hold an opinion.

Apart from this, there is the question of common decency, respect for the law and respect for human rights.

Judaism, Christianity and Islam, in historical order, and their myriad of splinter religions and sects, grew in the region known today as Israel and the Palestinian Authority and spread out to reach the four corners of the Earth, creating an unbreakable umbilical chord among believers with the birthplace of their creeds. Therefore in a spiritual sense at least, the lands belong not only to Israel and the Palestinians, but to the collective patrimony of everybody.

Peace in the Middle East can only come about through the implementation of, and respect for, international law and while Israel, primarily, flouts and breaches every Resolution the United Nations passes, beginning with seizing territory which does not belong to it, continuing with horrendous human rights abuses which break the terms of the Geneva Conventions and then building illegal colonies on lands taken from Palestinians, we cannot say that international law exists in any way, shape or form, other than some pie-in-the-sky precept. And that has to change.

Yet it is a valid precept to work towards and what better test than the Middle East? Under international law, Israel has to leave the territories it occupies and both sides have to find a solution to the damage Israel has done. It is not permanent - the colonies can be dismantled or handed over as they are. How it is done is up to the two sides involved - perhaps a phased pull-out period during which time Israel pays the Palestinian Authority rent for the use of its lands, money which could help to create the institutions which the Palestinian Authority would need to perform as a State.

Finally, the Jewish Lobby has internationalised itself, directly affecting the daily lives of non-Jews in their own countries. Take for example the United States of America, whose citizens' tax-dollars finance the State of Israel. Take the tremendous influence the Jewish Lobby has in the USA, whose foreign policy is in part controlled by Tel Aviv - why else would the USA veto or abstain from any Resolution which condemns Israel, even when it has perpetrated massacres, war crimes and crimes against humanity, especially when Washington claims to follow an ethical foreign policy? How ethical is a massacre? How ethical is a phosphorous attack on a school?

It is this influence outside Israel that gives humankind the collective right to express an opinion - after all if our Governments are using two weights and two measures when dealing with Israelis and Palestinians, when one side can act with impunity murdering, stealing and beating and the other systematically loses its lands, while western governments look away, then in any democratic system the members of the electorate have the right to say something.

The freedom and right to an opinion is sacrosanct and rises above the accusations by the Jewish Lobby against anyone who expresses an opinion critical of Israel or Israeli policies, of being "anti-Semitic" or "hating Jews" or "being anti-Israel". The first accusation is ridiculous, because "Semitic" is an adjective describing those who speak Semitic languages, which includes Hebrew and Arabic speakers. Let this ludicrous and absurd expression die with this article, here and now.

Furthermore, there is a vast difference between "hating Jews" and criticising the external policies of the State of Israel. Those who "hate Jews" are racists, and as such are as despicable as those who single out any other racial or ethnic or religious group just because they are different. Many Jews are anti-Zionist, many Jews work voluntarily in humanitarian organizations protecting Palestinians from Jewish bullies from the colonies who harass their communities, many Jews spend their free time protecting the Palestinians from their own people.

How to implement peace?

While Israel arrogantly decides to flout the law and breach each and every resolution passed by the UNSC, while Israel continues to build colonies on lands which it has stolen, while Israeli colonists attack Palestinians, bulldoze their homes, burn their olive groves and destroy their farms, we cannot say that the current approach is working.

And how about sport? A successful meeting between the Israeli and Palestinian Olympic Committees to discuss the free movement of athletes, coaching staff and sports materials has been praised by the United Nations Organization, being described as held "in a very constructive and cooperative spirit" by the UN Secretary-General's Special Adviser on Sport for Development and Peace, Wilfried Lemke.

For Wilfried Lemke, "The meeting was an example of how sport can bridge divides and be used as a tool for initiating dialogue between two sides". He added "With this initiative, we see once more how sport in a pragmatic and apolitical way can succeed where other more traditional means prove unsuccessful. Sport can provide a neutral ground for sowing the seeds of progress".

During the meeting the Israeli Olympic Committee offered training facilities and opportunities to Palestinian athletes.

Maybe this is the breakthrough. Sport - competing together for the love of the game and the joy of playing against an opponent in a spirit of mutual respect and camaraderie - can bring young Jewish and Palestinian people together in a spirit of friendship, far from the Wall, far from the rockets, from the colonies, from the generations of hatred and hopefully enable them to forge lasting friendships, away from the politics and politicians who have created this situation.

True, the colonies have to go, the Palestinian lands have to be handed back. International law stipulates that the frontiers of Israel start and end at the internationally-recognised 1948 borders and not one millimetre of land outside that belongs to Israel. However, the more initiatives there are like this, the more artistic and cultural exchanges there are and the more this involves young people, the better.

Certainly they cannot do any worse than the generations that preceded them. The responsibility for this lies mainly on the shoulders of Israel's bitterness, arrogance, intransigence and disrespect not only for the law but for the international community which upholds it. And also the international community, whose cowardice and hypocrisy allows Israel to get away with it with impunity. Elected governments are accountable and it is high time today's electorates started using the rights their forefathers fought so long and hard to win.