Right, five thousand birds drop from the sky just like that, following a massive fish kill in the same area and ok it was fireworks. Or maybe it was hail. Or no, lightning! That's it! Tell you what (whisper) someone heard the baker's assistant say that it could have been a (hush) weather balloon! No really.... 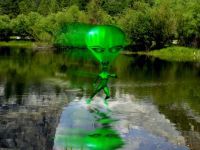 Some of us have been around for longer than we'd like, but what can you do? Just remember the human body is like a bottle of high quality Port wine: the more mature, the better. At least that's what we tell ourselves, it's a defence mechanism because we know we're nearer to the exit than the point of entry.

Another defence mechanism is used by those who hide behind newspapers to pull the type of BS we've just been laid with on New Year's Eve in Arkansas. It's the weather balloon type of explanation for weird phenomena that defy logic. The tell-tale signs that send the BS meter haywire are when you start getting conflicting information and loads of reasons, like the guy who missed your party for four or five reasons, first because...

BS! There's only ever one reason. So unfortunately never having been to Arkansas (a failing which I would love to rectify one day) let's do that journalist wrap we use for the lead in proper articles, that who what where and so on approach.

What? Red-breasted blackbirds (another source adds and some starlings); OK where? State of Arkansas, USA, more specifically around Beebe, a roosting area for these blackbirds; when? New Year's Eve Night; how many? Good question. One source says 1,000, another 2,000, another 3,000, another over 3,000 and another, between 4,000 and 5,000; motive? Hail stones (none reported), lightning strike (does not act like that, the birds would have to be touching), fireworks.

An initial examination of the birds, many of which fell to the ground dead but others were alive, showed signs of "acute physical trauma", occasioning "trauma in the breast tissue", "blood clots" and "a lot of internal bleeding". However " the main organs were normal. (Source: Arkansas Game and Fish Commission)

So, we have between one and five thousand birds (let's take the middle number of around 3,000) dropping out of the sky on New Year's Eve because a fireworks display frightened them so much they flocked together and banged into poles. Just one problem with that: birds aren't that stupid neither do these birds travel in migratory flocks of this size, nor are they nocturnal, so what were they doing flying at night?

Sounds like a nice BS story, or a weather balloon story. The day before, December 30, at Ozark, some 85,000 fish were found floating dead around 150 km west of Beebe. Totally unconnected say the sources. Well, they would, wouldn't they? The official story is it was an illness (so suddenly 85,000 fish show up dead, just like that) and the tests should take a (staggering) month to produce results, enough time for the story to die down and nobody will hopefully remember to conduct toxicology tests in Lake Arkansas.

That was before. Afterwards, on Monday morning January 3, in the State of Lousiana, just south, another mass bird fall, this time 500 birds of varied species, namely blackbirds but also starlings and grackle, these showing no signs of trauma. Nor had there been fireworks displays.

Now I have some questions to place. What is going on? Who owns factories around there? Is someone testing some sort of weapons system? Why are there three mass kills in three areas in the same region in three days?

Could it be that they were all killed by a weather balloon? And is it any way to carry on freaking people out like this without giving an explanation? Silence is the deadliest weapon of mass destruction in this case...