Tragedy on Christmas Island, Australia, in the Indian Ocean where at least twenty-seven bodies have been recovered from the water, including babies, children and women as a small vessel carrying refugees smashed into the rocks in a storm. As the world celebrates this festive season, let us spare a thought for those so desperate that they risk their lives looking for a better future. 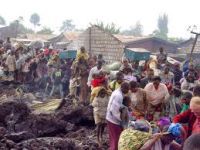 No Christmas for those involved in this tragedy. At least 27 bodies have been plucked from the water, according to the Australian Customs service, while a further 41 were rescued and one person managed to reach the shore. The vessel was carrying immigrants, believed to be mainly from Iran and Iraq, who were trying to reach Christmas Island, the Australian detention centre for asylum seekers.

The engine of the vessel stopped and the waves pushed it against the rocks, when according to eyewitnesses all the people on board rushed to the land side and it tipped over, rolled onto the rocks by a massive wave.

At the end of 2008, there were 26 million internally displaced persons, 15,2 million refugees and almost one million asylum seekers in the world plus a further 25 million people displaced due to natural disasters. The United Nations High Commission for Refugees claims that in any given year, the number of refugees receiving resettlement does not usually surpass one per cent.

The fact is that the vast majority of these people live in developing countries, many of which were ransacked by European powers for centuries, while siphoning off their resources, creating internal divisions which defied history, defied logic and defied all ethnic and cultural realities on the ground.

Countries were created in the mirror-image of western societies by drawing lines on maps, respecting European type frontiers such as rivers, whereas in Africa for instance, the same people tended to settle on both banks of the same river, or around a lake. Today's tensions in Nigeria and Sudan are wholly the result of bad colonial policies, in which power was given to those who had not traditionally and historically wielded a position of authority, creating a social fabric held together by fear and the precept "Divide and rule".

These policies were imposed in a top-down attitude with little or no respect for the societies which they were destroying by dividing them. The onus for implementing a system of development, and not just deployment, lies fairly and squarely at the feet of those countries which grew rich on the resources they stole from the countries whose populations today face the challenges which have created so many refugees and displaced persons.

True, the blame does not only lie with the ex-colonial powers, for corruption and ethnic strife played their part. But would such strife have occurred if the social balances had not been disturbed, and where are the corrupted without a corruptor?

For these millions of desperate people, there is never a Christmas. As we approach another festive season, let us remember that by supporting institutions which help local agencies to develop (such as NEPAD in Africa), we are creating the skills and the means these countries need to develop by themselves. It is time we started as an international community.