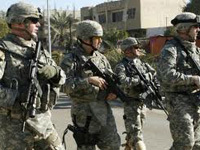 "If the expansion of the Human Terrain System gains traction at TRADOC it could kill any efforts to develop a cultural expertise construct by the Civil Affairs community, specifically the Civil Affairs Proponent at USA JFK SWCS. Everybody is looking to get as much money as they can for their organizations as the Defense budget begins to get squeezed. Naturally there could be a potential dog fight between TRADOC and any other Army organization making claims for HTS-like capability. Once something becomes institutionalized in the military it is difficult to change the new status quo."

Major Brad Striegel's (US Army Reserve) paper titled "Civil Affairs Functional Specialty Review" is an exceptional study of the US Army's Civil Affairs past and present. Initially written in March 2008--and updated in December 2009--it's a must-read for Civil Affairs students and military historians. US Army leaders focused on cultural analysis/stability operations should-if they have not already--spend time with the paper. **

There is also an excellent reading list that includes the title Civil Affairs: Soldiers Become Governors written in 1961 by Albert Weinberg and Harry Coles. A fantastic read, the 900 page book focuses on US military Civil Affairs activities in World War II. Adding support to the cliché "What is Past is Prologue", there is this gem in the introduction:

"Because of the ideological aspect of the struggle and because the United States acted as a member of a coalition of Allies, U.S. military leaders sometimes had to add to their traditional roles as soldiers those of the statesman and the politician. They were beset by the problems of resolving conflicting national interests and of reconciling political idealism and military exigency. On another level--in feeding hungry populations, in tackling intricate financial and economic problems, and in protecting the cultural heritage of a rich and ancient civilization-they had to exercise skills that are also normally considered civilian rather than military."

In 2009, 47 years later, Edward Burke's "Leaving the Civilians Behind: The Soldier Diplomat in Afghanistan and Iraq" would examine the same subject.

So it turns out, writes Striegel, that US Army Civil Affairs has been at the type of tasks performed by the Human Terrain System and Provincial Reconstruction Teams in various forms since 1847. According to Striegel (citing FM 41-10, 1/93), "In the conduct of military government in Mexico in 1847, General Winfield Scott demonstrated that properly conducted CMO saves the combat commander problems with the civilian populace. He maintained that CMO saved lives, money, and supplies and often guaranteed military success when no other factor was effective. General Scott exercised the specialized functions of CA that we know today as the CA functional specialties. In using these functions under military control, he used reliable native personnel in existing civilian agencies of government in support of his military control over the populace."

Canaries in a Coal Mine

"We had this [Human Terrain System] in World War II" writes Striegel.

Striegel believes that the Human Terrain System is a forgotten Civil Affairs competency. He writes that new civil affairs like constructs such as US Army TRADOC's Human Terrain System and Provincial Reconstruction Teams are "canaries in a coal mine that warn of the capability gaps of CA FX SP. Concepts like targeted recruiting and providing direct commissions to produce functional specialists, much like the specialist branches of today, have not been implemented since WW II, although a recent initiative a USA JFK SWCS now proposes such direct commissioning. No real overarching plan was ever implemented for CA FX SP training after World War II."

Since that time, Striegel writes that the Civil Affairs community has been sleeping at the wheel while the rest of the Army was filling capability gaps that Civil Affairs should have nurtured, developed and updated. ‘The same thing is happening with Agricultural Detachment Teams run by the National Guard. These are both Civil Affairs functional specialty capabilities and we are supposed to have them in our formations but we don't. The community was blinded and distracted by its Special Operations moniker for decades until it was divested from Army SOF in 2006."

Tony Bertuca of Inside the Army recently interviewed Colonel Sharon Hamilton, program manager of the HTS. In "New Director Makes Changes: Army Increasing Number Of Human Terrain Teams" Hamilton claims that HTS is expanding and cites a CENTCOM request for more Human Terrain Teams and that the HTS program is cooperating with "allies" although she would not name them.

Five of those allies are Germany, Israel, the UK, Australia, and Canada.

The fact is that the world's major military powers already have their own versions of HTS. Many of them will be at the Defense Geospatial Intelligence Conference in the UK in January 2011. A feature of the conference is the Human Terrain Analysis Focus Day. An American company SCIA will be leading a seminar on GIS and Human Terrain Analysis according to the program bulletin. Dr. Swen Erik Johnson, senior social scientist at SCIA-who claims to have developed the first HTT for DOD in 2005-will likely be in attendance. The US Army Corps of Engineers and an element of the US Marine Corps will also be in attendance.

HTA Day features this: "This day will focus on the need for every defence intelligence organisation to develop a human terrain analysis strategy. Most intelligence and geospatial organisations in defence forces around the world are or will soon be tasked with developing and implementing a human terrain strategy. This means you will have to learn about human terrain analysis, set goals and implement an effective strategy in your organisation. Join this focus day to learn from the pioneers, who have already implemented an HTA strategy and who have run programmes and projects in Afghanistan. Build your strategy based on ideas, mistakes and successes of the pioneers. Learn from the experts in HTA about the best solutions, technologies, strategies and implementation processes."

No doubt, Colonel Hamilton has done some excellent work while at the helm of HTS. Bertuca's article cites some of the changes Hamilton has forced: bringing work in-house, jettisoning incompetent personnel, creating oversight, reaching out to academia, etc.

Those actions are arguably the result of the US Army AR 15-6 investigation; the Center for Naval Analysis report; some good people in the media, DOD and the US Congress; plus the 100 or so "sources" speaking through the 47 article HTS series written over the past two years. Those sources have been vindicated on just about every level-they deserved better than they got. And those killed and wounded while with HTS? It's tragic and a shame.

At any rate, skeptics within DOD are not sold on HTS. They say it is too early to tell how HTS will evolve from this point on: the new system has only been in place for a heartbeat. Many in academia believe that HTS has such a bad reputation that highly qualified social scientists will never apply for work in the program.

Others believe that the comments made in Bertuca's piece are little more than a public relations gimmick engineered by Maxie McFarland to gain scarce funding from the US Congress. In this view, the Inside the Army piece is just the beginning of a strategic communication effort that will find its way into the MSM.