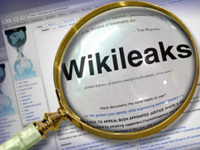 Flashback time: The language used to depict Saddam Hussein and Osama Bin Laden as craven life forms has returned for a repeat performance except that this time the target is Julian Assange and his merry band of WikiLeakers. "Execute him" say dozens of US politicians and assorted government officials. "Arrest him and hang him," say others. OMG! laments the US government over news of critical infrastructure locations revealed worldwide. Never mind that maps of pipelines, cable routes, etc. can be pulled with ease right off the Internet.

So does this mean Assange is on Obama's hit list? Will US Special Operations Command send a kill-capture team? It all brings to mind Ari Fleischer's Single Bullet Doctrine of 2002 which stated that one bullet to Saddam Hussein's head would be cheaper than sending an invading army to topple the former and now very dead Iraqi president. Technically he was correct.

Using this logic, it'd be cheaper to send a US sniper team to take out Assange rather than spend millions of US dollars extraditing, imprisoning and trying the WikiLeaks head.

Perhaps the American people would enjoy-courtesy of the MSM-watching Assange's hanging/shooting, or staring at his corpse via electronic and print media. They did just that with Saddam Hussein and his family. Hussein was hanged in the stairwell of a building in Iraq and his two boy's corpses were cheerily shown via the MSM with hearty US government approval. The masses must see some sort of return on war investment whether it is the live-hanging of a dictator and his son's corpses, or the American gladiator gently holding a child lifted from harm's way as a palliative to the hanging and dead bodies.

"The United States is a nation at war," asserted President Barak Obama. In fact, the USA remains in a State of Emergency declared by George Bush II in 2001.

"Peace Enforcement," "All of Government, All of Society," "Freedom is Not Free," remind daily of the war effort. No one is exactly sure what these concepts mean, but they "sound good" said one observer. Torture, KIA, and MIA are banal. "I'll kill you," say the American teenagers running down the school hallway.

Americans, young and old, rush home to play the most recent video war games. They talk as if they have actually been to war in a distant land. High school football uniforms come now with American flags on them (why?). Collegiate football games in 2011 will be played in Bowl games sponsored by Northrop Grumman and Bell Helicopter. This is all positive if one is pushing war as a way of life.

To get that done, the War State, or any state, must be supported by main stream media in all its forms (see Reel Power for the role of movies). The MSM serves as interlocutors between the governing elite and the public/masses. Journalists in this scheme interpret events with guidance from media elite (editors, owners) who are quite comfortable in their incestuous relationships with US/Foreign government/corporate officials.

And so this was the standard model of journalism. Turns out that what we all got for news over the years were just scraps. Some meat left on the chicken bone and a few croutons thrown down for consumption. WikiLeaks has busted that model for the moment even catching the New York Times trying to trump up Iran's ballistic missile capability when dispatches show the opposite.

An intriguing document found in the WikiLeaks dump is a cable concerning the spread of Israel's Mafia. At first glance, it seems inconsequential as every country has organized crime rings operating freely. Besides, one never knows when members of the mafia might be useful for national security purposes. At any rate, we learn that a few years back an Israeli mafia don was assassinated by a motor scooter bomber in the same manner as the Iranian physicist recently executed in Teheran.

"In November 2008, Israeli crime boss Yaakov Alperon was assassinated in broad daylight in a gruesome attack on the streets of Tel Aviv, only about a mile away from the Embassy. According to several media accounts, a motor scooter pulled up alongside Alperon's car and the rider attached a sophisticated explosive device with a remote detonator to the car door. The bomb killed Alperon and his driver, and injured two innocent pedestrians. The hit was the latest in a series of violent attacks and reprisals, and indicated a widening crime war in Israel...the old school of Israel OC [Organized Crime] is giving way to a new, more violent, breed of crime... that the new style of crime features knowledge of hi-tech explosives acquired from service in the Israeli Defense Forces, and a willingness to use indiscriminate violence, at least against rival gang leaders. New OC business also includes technology-related crimes, such as stock market and credit card fraud, and operates on a global scale."