Ireland and the European Union: Who is to blame?

Like a house of cards, one by one, the European Union starts to collapse. First Greece, then Ireland, next who knows? The "experts" blame the banks, blame the bankers, blame the financiers...but who is apportioning the blame to where it really lies: to the system itself? 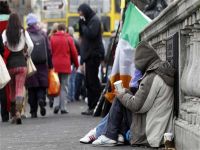 It is by now patently obvious that no system is perfect. The Communist system in which the State provides security for its citizens, where everyone contributes towards the common good, was implemented in many countries in the twentieth century where in general terms it was hugely successful. The capitalist system, one whose vision is a society in which people are free to create their own business and stimulate the economy by creating wealth and jobs, while paying taxes to create a social umbrella, operating alongside Trade Union movements which protected workers' rights was a nice idea and on paper a good ideal.

The problem is, one system worked and the other did not. In the Communist countries, healthcare was excellent and free, schooling was excellent, and free; having a house and a job was a birthright; public transportation was free, public utilities were free; basic foodstuffs were free and distributed by the State, which in turn provided national security with strong, defensively-oriented armed forces and security on the streets - people were free to walk around without being attacked by marauding gangs of drug addicts, inner cities were free of feral children.

The other side of the Iron Curtain spent trillions of dollars trying to sabotage the model, trying to assassinate the political leaders of Communist countries (such as Fidel Castro) and from day one in Russia started interfering (the Civil War). This side of the Curtain was happy to call Stalin Uncle Joe when 26 million Soviet citizens were losing their lives defeating Hitler (90% of the Wehrmacht casualties were sustained on the Eastern Front) yet after the Great Patriotic War finished, settled back into its customary policy of antagonism against a political and social system which freed millions from the tyranny of Imperialism across the globe and brought impoverished and backward societies into the front line of development in just a few decades.

Instead of siding with and working towards the success of this system, this side of the Curtain sabotaged it and by a skilful policy of dangling carrots in front of the noses of a generation of donkeys which blindly took the bait, sent the entire world, just two decades later, into the worst economic and financial crisis it has known. And it isn't over yet. Make no mistake: the economic black hole is so vast in certain countries that there is no sunshine on the horizon and there will not be for decades to come.

And what has this wonderful capitalist system done? For a start, it turned against the attractive ideals which underpinned its basic policy, that of creating societies free to reap the reward of personal endeavour. Predictably, it has turned into a system whereby dog eats dog. Where are the high street grocery stores? They have gone, sucked into horrific black holes called hypermarkets or big spaces, where all your movements are controlled from the minute you enter to the second you leave, by the use of aromas (bread, makes you buy), the strategic placing of goods, leading you to go past the products you would not normally buy as you make for the staple goods, by manipulation of music to make you walk faster or slower, right up until the check-out, where the impulse buys are placed at just the right height to catch the attention of the average baby sitting on a supermarket trolley or the average toddler walking beside mother.

While the Communist system distributed houses for free, the other side of the Curtain turned people's lives into a nightmare from the moment they are born to the second they give up and die, no doubt being asked if they know how much money they are costing the National Health Service days before they do (as was the case with a close family member). After twelve years of education, it seems many cannot even write, higher education has become a business, as has healthcare, leisure time activities and transportation. Getting and retaining a job is a drama, buying and maintaining a house another, while a decent pension is a thing of the past. This, while bottom-line policies dictate how few police there are on the beat as the citizens grapple with living in societies in which an old lady does not feel safe to go out after dark.

Wonderful. However, that is just the start of it. As if the system itself were not bad enough, they brought in international mechanisms of control which directly affect the lives of citizens the other side of the world and in the EU, they exported it and imposed it on an inter-continental scale, in a top-down attitude of "do as I say and shut up", repeating referenda in countries whose populations obviously did not want to live in a Federal State. Take Ireland as a prime example.

And here we reach the crux of the matter: the globalization of stupidity. As if it were not enough for the "system" to turn its back on its founding principles, which were valid, it invented vectors by which rating agencies such as Fitch, Standard and Poor and Moody's (based in the USA, where else?) can stipulate how much a country's capital is worth and thereby directly affect the lives of its citizens. This has nothing to do with a system in which citizens are free to create wealth and therefore let's not call it Capitalism any more. It has morphed into something far, far worse: The speculative system.

In a word, gambling. Whereas in the past money was based upon value, i.e. trading in sea shells or the value of a silver coin (which was in Medieval times cut in half or quarters to provide the real value of a payment) speculation took its first uneasy steps when the promissory note became the currency in circulation, not worth the paper it was printed on, but having the value of the promise to pay the bearer a certain amount of money (e.g. one pound). The stake into the heart of the money-based-on-value system was the decision by the Nixon Government to unilaterally end the policy of fixing the value of the dollar to gold in 1971, destroying the Bretton Woods agreement to peg exchange rates among currencies.

The second step was the insurance market, tying monetary sums to eventualities and as time went on, these products became more and more complex, drawing in the banking system itself, insurance and reinsurance policies, investment funds, pension funds, municipalities, University funds, healthcare authorities' trusts, basing their wealth on future products of commodities, shares, government bonds, taking out insurance policies on these values...and when the public confidence in the economy collapsed, all of these products lost value because they were never based on anything tangible, purely on speculative and intangible waves of euphoria.

Nobody knows exactly how many trillions were vaporised because the knock-on effects are still being felt. It was this catastrophic backdrop which the banks were facing, their investment funds intrinsically tied up in this fog of ratings agencies and a more and more globalised economy: a world-wide house of cards waiting for a hurricane.

This system was bound to be wide open to the effects of its endemic and chronic vector of failure to create employment, where a 4% unemployment rate is classified as "healthy" (creating an underclass from the outset) and by now based upon the power of the USD, was wide open to the effects of the USA manipulating the value of the dollar to stimulate exports and to reduce its debt.

With the banks up to their ears in catastrophic investments and with unemployment rising, it came as no surprise that the system itself had positioned itself on thin ice. In Ireland's case, the budget deficit had reached 32% of its GDP, while the European Union had stipulated in its Convergence package that economies could only have a 3% deficit.

How Ireland gets back from the brink without seriously harming its consumers, who after all have fulfilled all the demands made of them, paying their taxes and following the laws imposed upon them, is a telling question for today's globalised world.

Suffice it to say that were the intelligent powers that be to raise just a one per cent tax on financial derivatives traded, hundreds of billions of USD would become readily available, taking the burden away from the citizens. This will never happen, because this system is controlled by a handful who have become super-rich at the expense of the rest of the population, consigned over time to becoming members of a global under-class.

Ladies and gentlemen, we have allowed ourselves to be duped by a global system controlled by the few, catering to their interests and rendering the endeavour of billions of people meaningless. It is as if a cabal of gamblers has taken over the world. And guess who gets to pay their debts?