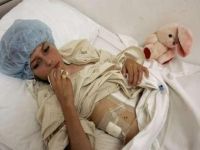 The United Nations is coordinating a new convention to ban cluster bombs worldwide. This is a deadly, destructive nuisance from the hands of warmongers who have created 85,000 victims in at least 18 countries - official figures say only 16,000, because there is a chronic problem of under-reporting. According to calculations of Handicap International, an NGO that defends the ban on arms and received the Nobel Peace Prize in 1997, 98% of victims of cluster bombs are civilians and 27% children. All in poor countries.

The UN has already given its message: it wants an immediate end to their use. The Convention entered into force on August 1 this year, and has been signed by 108 nations, of which 46 of these countries have also ratified it. The treaty, besides prohibiting the manufacture of cluster munitions, demands that states provide assistance to victims of these weapons and provide assistance to affected countries.

Brazil is a country that has not signed the international Convention. Why?

Just like the United States, Russia, China, India, Pakistan and Israel, Brazil is a manufacturer of this type of weapon. The Foreign Ministry is aligned to these countries in defence their economic interests. At the time of the Convention, Brazil declared that it does not agree with the Convention view because cluster bombs are "a necessary armament for national defence." So then why do they export them?

In Brazil, the weapons are manufactured by the companies Avibras, Ares, Target and Britanaite Chemical, and are exported to Iran, Iraq and Saudi Arabia among other countries. It is one thing that constitutes the "presence" of Brazil in the Middle East.

Cluster bombs release hundreds of explosives while being launched and can harm victims in an area equivalent to four football fields. Weapons of this type carry within them hundreds of submunitions that are released in the fall to the ground.

According to the Brazilian coordinator of the Coalition Against Cluster Munitions (CCM, its acronym in English), Cristian Wittmann, cluster bombs have not only a broad reach, but also a high failure rate. Wittmann said that four out of ten submunitions do not explode on first impact, creating a veritable minefield. About 400 million people live in areas affected by cluster munitions in countries like Iraq, Afghanistan and Lebanon.

The obvious question is if Brazil is confirmed as a major world-wide political power, including having a seat on the Security Council, will it act in this same way?