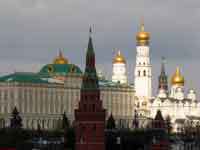 This article explains Russia's current economic and global policies which is a lesson that cannot be overlooked. The price is just too high for America and the world to ignore. I consider this more important than my other articles and I hope you can agree. Thanks.

According to the Moscow Times Iran tested its first nuclear plant February 26, 2009 with the help of Russian officials. Russia is working with Iran and not against it. Russia no more wants Iran to have nuclear missiles any more than the US does. Recently, President Dmitry Medvedev on September 22. 2010, signed a ban to stop deliveries of S-300 missile systems to Iran. No country is perfect but Russia's diplomacy and economic practices are lessons America and the world should learn from.

January 2009 Prime Minister Vladimir Putin delivered a speech at the World Economic Forum in Switzerland. He warned against too much government intervention using the failed Soviet Union as an example. His plan was to reduce taxes and invest in the economy. He saw the global picture and the basics of supply and demand. Remember, Putin brought prosperity to Russia as president and Russia is at a new dawn in its history. Putin has a winning track record.

"We are reducing taxes on production, investing money in the economy"

"During the time of the Soviet Union the role of the state in economy was made absolute, which eventually lead to the total non-competitiveness of the economy. That lesson cost us very dearly. I am sure nobody would want history to repeat itself." -Vladimir Putin Can Obama and the world learn from Putin and avoid the Soviet mistake?

Long ago Putin saw the economy turning sour because of the poor regulation and virtual money being used globally. Putin safeguarded Russia by accumulating resources for the future and preparing a sound economic strategy. The new stimulus plan he introduced will help the unemployed by offering job training along with relocation to jobs in other cities or money to start a business. Currently the unemployment rate is less than 7% in Russia.

Of course the average American makes more money than the average Russian. America's unemployment rate is currently 10% and is 12% in some states. However, the point is that Putin is a realist and a better economist than most global leaders.

Putin said, "We are reducing taxes on production, investing money in the economy".

"...some are tempted to expand state economic intervention to the greatest possible extent."

Can Obama learn from Putin? The answer is no. Obama always rejects the Republicans and reality so there is no chance in Hell that Obama will lower taxes. As Putin said, "...some are tempted to expand state economic intervention to the greatest possible extent". Well, Obama was tempted and he sure expanded the government like a clown blows up a balloon.

Unfortunately, due to poor education, it is normal in the US to receive a negative or indifferent response when mentioning Russia. Russia is virtually unknown to Americans. The belief the government is Communist or that the old NKVD (KGB) still exists in Russia is generally held to be true in the US. Very few know Russia has suffered the loss of over 58 million people in the wars and gulags this past century. Very few even know the triumph of Christianity in an atheistic government where more Christians were persecuted than in the first 300 years after Christ. As Alexander Solzhenitsyn explained to the world:

The light of faith ignited by St Andrew still burned in the hearts of many Russians even after all the churches were closed or destroyed by the Communists. America is not aware that Christianity has been blossoming in Russia and flourishing with the reconstruction of new churches. Although Russia's churches are not overflowing with the faithful, nevertheless it has a new beginning. The forest was burned and now the seeds under the scorched earth have begun to grow again.

In America, Christianity has been under attack by the media or by the likes of the ACLU. The removal of the 10 Commandments from public places on American soil is reminiscent of the removal of icons after the 1917 revolution in Russia. In America, materialism has caused chaos in society. While in Russia, Communism already had its reign of terror spreading death and fear. It is a miracle St Basil's Cathedral still exists in Red Square. Napoleon, Hitler or Stalin could not destroy it or the Russian people.

I doubt Obama or the U.S. Congress will take note since all politicians are mostly interested in remaining in power. Money is "god" in a materialistic society. However, we can only hope and pray as the Russians did and learn from men like Alexander Solzhenitsyn.

"If I were asked today to formulate as concisely as possible that main cause of the ruinous revolution that swallowed up some 60 million of our people, I could not put it more accurately than to repeat:

'Men had forgotten God; that is why all this has happened." - Alexander Solzhenitsyn

Will America and the rest of the world repeat the "Soviet mistake" and live as though there is no God? Will sodomy flourish and the spirituality of people be ignored or replaced with drugs or the occult? It is a dangerous trend that some countries are taking. The lesson Russia can teach us cannot be overlooked. The price is just too high to ignore.

Alexander Solzhenitsyn is only one of many witnesses.

"It has granted me to carry away from my prison years on my bent back, which nearly broke beneath its load, this essential experience: how a human being becomes evil and how good. In the intoxication of my youthful successes I had felt myself to be infallible, and I was therefore cruel. In the surfeit of power I was a murderer, and an oppressor. In my most evil moments I was convinced that I was doing good, and I was well supplied with systematic arguments. And it was only when I lay there on rotting prison straw that I sensed within myself the first strivings of good. Gradually it was disclosed to me that the line separating good and evil passes not through states, nor between classes, nor between political parties either-but right through every human heart-and then all human hearts... And even within hearts overwhelmed by evil, one small bridgehead of good is retained. And even in the best of all hearts, there remains... an unuprooted small corner of evil."

Solzhenitsyn's words and many like them are often ignored as many a youth has ignored a parent's advice throughout the centuries. Scoldings and tears from a Fathers eyes could not prevent the dangers that could be avoided. Perhaps humanity can elevate itself and glance for a moment at a time in history where life was cheap and easily wasted. Can the cries of the murdered echo to the present as a warning?

The last priest of St Basil was Ioann Vostorgov who was murdered by the Communists. He wrote freedom without God can only lead us to chaos and death.

"... Just as Bolshevism was the logical consequence of socialism in its search for freedom, so the logical consequence and end of freedom will be anarchy, and it will come to us - black, terrible, mysterious and awful. It will sweep away the present rulers, it will once more reveal the terrible pages of the judgement of God. And this judgement of God will reveal to us openly that there is not and cannot be complete and absolute freedom for man, that it is limited and must be directed by the Law of God: like steam or a steam-engine in the absence of a good driver, it led to the destruction of life; like a river which flows beyond its bed and over its banks, it turns life into a bog and a source of illnesses. And when the 'end from the flood' will appear before us, then will begin - if we repent, of course, and are worthy of life, and not of death, - the recreation of life. And this not only in Russia, but in the whole of humanity..."

Christ Our Savior Cathedral http://www.xxc.ru/english/destruct/index.htm was destroyed by the Communists in Moscow in 1931. As the building fell, so many innocent millions were murdered, swept away. The Four Horseman of the Apocalypse were unleashed. The Red terror continued and slave labor camps were established called "gulags". The Ukraine was one giant concentration camp, "Holodomor".

In this new century Russia has a new rebirth in the seen and unseen. Russia? Why should we learn from Russia you say? Why should we listen to our politicians or the media for that matter? Remember it was them who told us on August 2008 that Russia was invading South Ossetia and Georgia while insisting Russia was at fault and should be stopped. The American media was still eagerly blaming Russia for starting the war even when the young South Ossetian girl Amanda Kokoeva went on Fox News and thanked the Russians for helping.

The truth was unveiled on November 2008 when Georgian President Mikhail Saakashvili admitted he did start the war. Oops! Did the American media or politicians such as Condoleeza Rice admit their mistake in condemning Russia? Did they acknowledge the thousands killed by Saakashvili? No, of course not. Admitting a mistake would lower credibility and network ratings.

CNN did allow Putin to have his say but the damage was done in portraying Russia as an invading menace. The general public has no time in their daily lives to investigate world affairs. That is the job of the news media. They're suppose to report the news not filter it to their own designs. Obviously they cannot be trusted. What else is new, right?

Lenin once said film was a great way to influence the public. He used propaganda like Leni Riefenstahl did for the Nazis. Goebbels did say if you repeat a lie often enough it will be accepted as truth. Did the media and the politicians learn from them? Has Communism or Fascism come to America? Well, according to the Newsweek magazine's February 2009 issue, "We Are All Socialists Now".

That was early in 2009 when "Obama mania" was still strong and his agenda was yet unknown to those who voted him in. On November 2, 2010, America said "HELL NO!" to socialism and fired almost all of the Democrats they could. Enough was enough and the people got sick and tired of being in unemployment lines, losing money and their homes or working 2-3 jobs. A 4 year degree means nothing in Obama's economy when businesses are holding onto their money like misers as Obama raises taxes on them.

The U.S.Republicans share the same economics as Putin. However, who shares his spiritually and that of President Medvedev? They are both good Orthodox Christians. Is there a man or woman among the Republicans to lead America? Can the rest of the world find its way without God? The governments of a country reflect the soul of its people.

"The physical world is a shadow of the spiritual world"

Contact Xavier Lerma at [email protected]
Please include a link to English.Pravda.Ru if you republish this article.