Note on the thwarted coup in Ecuador

1. What happened in Ecuador? 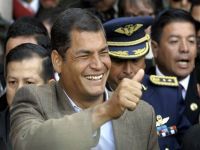 There was an attempted coup. There was, as told by several media outlets in Latin America, an "institutional crisis" as if what happened was a conflict of jurisdictions between the executive and legislative branch, not an open insurrection in the first branch, the National Police, who effectively form a small army of 40,000 men against the Commander in Chief of the Armed Forces of Ecuador, who is none other than the legitimately elected president. Also what was said by Arturo Valenzuela, Deputy Secretary of State for Interamerican Affairs, "it was an act of undisciplined police."

"Characterized in this way what if the equivalent of the National Police of Ecuador in the U.S. had beaten and physically attacked Barack Obama, wounding him, kidnapping him and keeping him in custody for 12 hours in a police hospital until a special Army command would release him after a fierce gun battle? Probably never happen. But as a matter of a Latin American president, what there appears as an intolerable aberration, here it is portrayed merely as a schoolboy prank.

In general, all mass media gave a distorted version of what happened, carefully avoiding talk of an attempted coup. Instead, they referred to it as a "police riot", which obviously makes the events into a relatively insignificant story. It's an old trick from the right, always interested in downplaying the outrages committed by their supporters, and to enlarge the errors or problems with their opponents.

So it is good to remember the words uttered by President Rafael Correa, to characterize the incident as a "conspiracy" to commit a "coup d'etat." Conspiracy because, as was most evident, there were other actors who voiced their support for the coup in its gestation. And there were no political groups that came out to support the coup in the streets and squares?

Was it not former president Lucio Gutierrez, one of the fanatics who tried to forcibly enter the premises of the National Television of Ecuador? Did he not say, by chance, to the Mayor of Guayaquil and great rival of President Correa, Jaime Nebot, that there was a struggle between who was in a power a picture of an authoritarian and despotic President Correa, and some of the police, wrong in its methodology, but were right in their claims?

This false equidistance between the warring parties was an indirect confession of their complacency about current events and deep desire to get rid of him, at least until now, the impregnable political enemy. Not to mention the unfortunate reversal of movement of "indigenous" Pachakutik, in the midst of the crisis, made public his call for an "indigenous" movement, social movements and democratic political organizations to form a national united front to demand the departure of President Correa. "Life gives you surprises," said Pedro Navaja. However, there is no surprise when one takes note of the generous contributions that USAID and the National Endowment for Democracy have done in recent years to "strengthen" the citizenship of Ecuador through their parties and social movements.

Conclusion: there was a small isolated group within the police who tried to blow it, but a set of social and political actors in the service of the local oligarchy and imperialism. They will never forgive Correa for ordering the evacuation of a military base that the United States held in Manta, the audit of Ecuador's foreign debt and its incorporation into ALBA, among many other causes.

Moreover, the Ecuadorian police, many years ago, as others in the region, were educated and trained by their U.S. counterpart. Are they included in some kind of civic education, or the necessary subordination of the armed forces and police to civilian authority? Does not appear. Instead, it highlights the need to end without further delay, "cooperation" between the security forces in most Latin American countries and the United States. Everyone knows what they teach in those courses.

2. Why the failed coup d'etat?

Basically for three reasons: first, through the rapid and effective mobilization of large sectors of the Ecuadorian population, despite the danger that existed, people went to occupy the streets and squares to show their support for President Correa. What happened is what must always occur in such cases: the defense of constitutional order is effective insofar as it was assumed directly by the people, acting as a protagonist and not as a mere spectator of the political struggles of their time. Without the presence of people on the streets and squares, something that Machiavelli had warned about 500 years ago, that there is no republic that resists the clash with the characters of the old order. The institutional framework is insufficient to ensure a stable democratic regime. The right-wing forces are very powerful and have dominated the system for centuries. Only the active presence of militants, the people on the streets, can thwart the plans of tricky scammers.

In the second place, the coup may have been interrupted because the popular mobilization that developed very quickly in Ecuador was accompanied by rapid and vigorous international solidarity that has started to become effective. No sooner had the first news of the coup been revealed among other things did it precipitate the very timely convening of an urgent and extraordinary meeting of UNASUR in Buenos Aires.

The clear backing obtained by Correa from the various governments of South America and Europe had been successful because the future course of the coup plotters became clear. If successful in their coup, the plotters would be condemned and ostracized to political, economic and international isolation. It proved once again that UNASUR is effective and works, and the crisis was resolved, as before in Bolivia in 2008, without the intervention of foreign interests in South America

Thirdly, but not least, the courage shown by President Correa, who did not cave in, and steadily resisted the siege and the imprisonment that had been their objective, although it was obvious that his life was in danger until the last moment when he left the hospital. His car was shot at with clear intentions to end his life. Correa demonstrated the courage to undertake with success prospects of major political achievements. If he had wavered, had been cowed or an implied submission to the plans of his captors, the result would have been a different outcome. The combination of these three factors: the internal popular movement, international solidarity and courage of the president eventually produced the isolation of the rebels, weakening their resistance and facilitating the rescue operation conducted by the Army of Ecuador.

Yes, because the fundamentals of the coup have deep roots in Latin American society and U.S. foreign policy towards this part of the world. If we analyze the recent history of our countries, we find that coup attempts took place in Venezuela (2002), Bolivia (2008), Honduras (2009) and Ecuador (2010), in other words, in four countries characterized by ongoing processes of significant economic and social transformation and also because of being integrated into ALBA. No right-wing government was disturbed by a coup d'etat, whose sign the political oligarchy and imperialism would find impossible to hide.

Thus, the world champion of human rights violations, Alvaro Uribe, with his thousands of missing people, their graves, their "false positives" - never had to be bothered with military revolts against him during the eight years of his mandate. And it is unlikely that other right-wing governments in the region will be victims of an attempted coup in the coming years. Of the four that there were since 2002, only three have failed, only the one in Honduras perpetrated against President-elect Manuel Zelaya, was crowned with success. (*) The important fact is that his execution was a surprise in the middle of the night, which meant that the news was not known until the next morning and people did not have time to go out and take to the streets and squares. When they did, it was too late, because Zelaya had already been banished.

Furthermore, in this case, the international response was slow and lukewarm, without the necessary speed and strength that was seen in the case of Ecuador. Lesson to be learned: the speed of democratic and popular reaction is essential to clear the sequence of actions and processes of the coup, which rarely is an interweaving of initiatives that, in the absence of obstacles that stand in the way, is mutually reinforcing. If public response is not produced immediately, the process feeds back, and when they put a stop it is too late. The same applies to international solidarity, to be effective it must be immediate and uncompromising in defense of the prevailing political order. Fortunately, these conditions existed in the case of Ecuador, and so the coup attempt failed. But there should be no illusions: the oligarchy and imperialism will try again, perhaps by other means, to overthrow governments that do not bow to their interests.