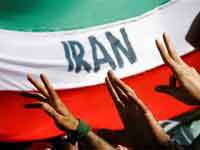 It is warmly comfortable to lazily scan the Hamas-Hezbollah-Syria-Iran-Iraqi Insurgency Axis as a disparate and discrete group of political/terrorist movements. For to otherwise view the insidious amalgam as a single coherent military and political machine would be to admit to an unthinkable and dark reality: that there currently exists a waxing nuclear capable Fourth Reichastan which is about to devastate and lay waste to the Judeo-Sunni-Christian-Buddhist-Hindu world. Such a conclusion would tear away the false veneer that now exists which isolates the Iraqi, Hamas and Hezbollah insurgencies from each other and from Syria's and Iran's vital military and sovereign support of both. The grim reality is that the Hamas/Hezbollah Israel War and the Iranian backed component of the Iraqi insurgency are two sides of the same coin that has as its fount the growing Iranian Fourth Reichastan Axis against America and the World.

Therefore, the only question is whether such an Iranian Fourth Reichastan exists. Now all manner of "experts" will collectively say "Pshaw!" They will piously intone the canard that "Syria is Alawite and Iran is Shiite," therefore, there can't possibly be a functional "Axis." Firstly, the Alawites are a secret Shia sect that traces its roots to the Shia Imam, Hasan al Askari of the 9th century. This minority Alawite Shia sect of Syria actually oppresses what is a vast majority of Sunnis in Syria. So therefore, the Fourth Reichastan axis is a pure Twelver Shia axis. Further, historically, in the ante bellum tides of WWII, did Germany and Italy have to have exactly aligned interests to effectively function as a military "Axis"? No.

In fact, in today's terms Syria is the "Italian" or weaker element and Iran is the "German" or stronger element of the new Fourth Reichastan Axis. In a hauntingly eerie similarity, in the "Thirties," Mussolini looked almost as Hitler's equal partner in the Axis just as Assad now looks like an equal partner of Iran. The reality then is as the reality now, then, there was only one Fuehrer and now, that one "Fuehrer" is Iranian President Ahmadinejad and his kabal of end-of-days Mahdists. Iran is in fact using Syria, as Germany used Italy, to facilitate its early strategic moves in the "Thirties" so that in the "Forties" Iran will come to rule. Iran's ignition of the illogical and unnecessary Hezbollah war may not be to tactically fog the Iranian nuclear issue but to strategically irrevocably push Syria into its loathsome embrace as Germany pushed Italy into its Axis in the Spanish Civil War. Additionally, Iran's soon-in-coming acquisition of Lebanon by its Waffen SS Division (aka Hezbollah) is nothing short than a Shia-style modern-day Nazi Anschluss (aka rape) of Austria.

In short, the seemingly disparate elements of the emerging Fourth Reichastan supply each other as an axis, defend each other as an axis, and fight for each other as an integrated axis: therefore, they're an axis. Just because Iran has not openly fired missiles from its soil at Israel doesn't mean its supply of materials and manpower and technical "advisors" and spiritual "permission" is not the essential and sovereign underpinning for Hezbollah's open warfare on Israel. Likewise, just because Iran has not sent actual Iranian soldiers in actual Iranian uniforms into Iraq to openly kill American soldiers does not mean that Iran's logistical supply of death-spewing IEDs, monetary and manpower supply to the Iraqi insurgency as a sovereign power, has not killed and maimed hundreds of US soldiers and effected a critical tipping point destabilization in Iraq. Such a silent, but extremely deadly war by Iran against America in Iraq is clearly aimed to cause America's catastrophic military defeat in Iraq. Clearly, the Iranian malevolent elemental efforts in Gaza, Lebanon and Iraq arenas are not just isolated meddling but are a purposeful, and integrated and focused warfare with the specific intent on destroying American military and strategic vital interests in the Persian Gulf and the World.

As an important intermezzo issue, the bellicose neon threat of Saddam only masked the parallel, truer and far greater danger of the quietly incubating malignant Islamo-Nazi Iran, nurtured by Russian nuclear technology for cash transfers. Russia similarly in 1940 sold the essential oil for Hitler's early Blitzkrieg machine against France and England. Fortuitously, the destruction of the feared Saddam only lured the presently stoppable cash-strapped Iran to rear its ugly head for the World to see and recognize for its palbable evil before a proto-nuclear Iran had effectively metastasized into an unstoppable nuclear-weaponized Iranian Fourth Reichastan. Furthermore, the destruction of Saddam has made virtually not a whit of difference in Iran's decades' long trajectory toward its acquisition of nuclear weapons. Bushehr, for one example, was contracted for with the Russians in 1995. In fact, conversely, without the fear of Saddam, Iran has overtly and tautologically stated their ambitions and intent to acquire a nuclear weaponized arsenal if "threatened."

Nevertheless, if in fact there exists a Shi'ite Fourth Reichastan, the consequences are immediately stark, dramatic and dire. Most importantly, Syria, a modern reincarnation of fascist Italy, immediately becomes the de jure enemy of America. Syria is the critical enabling supplier of both the Iraqi insurgency and Hezbollah insurgency is no longer a dirty little secret ignorable by America. Syria is in fact the key supplier and sovereign territorial safe haven which supports the insurgency wars of Hamas, Hezbollah and Iraq. Syria is then an active purposeful belligerent against both America and Israel and not just a passive "innocent bystander."

In fact, America's and Israel's disconnectedly treating Syria like an "innocent bystander" to the Hamas, Hezbollah or Iraqi insurgency wars will insure a twin defeat of Israel in its war of attrition with Hamas/Hezbollah and of America in its war with the Iraqi insurgency. Assad Junior will see his open support of both fronts as not only "costless" to his regime but his very empowering legitimacy. Assad will thereby be mistakenly emboldened, as was Mussolini, to redouble his resupply efforts and further fan the flames of both conflicts. In reality, America needs to ply Assad the same ‘Operation El Dorado Canyon'-like tough love with which Reagan, through Bush, wooed Khadafy. That may be all that is needed to roll up Iran's baby faced junior partner in crime and to cut the Insurgencies' key supply lines from Syria. Otherwise, America's and Israel's disastrous inaction with respect to Syria will allow Assad Junior to delude himself into thinking himself as the king maker Assad Senior instead of as what he really is, an Iranian pawn. Concomitantly, the Sunni population of Iraq, therefore, has a vested survival interest in eradicating its Syrian imported al Qaeda insurgency elements, and, in fact, protecting the American troops. For if the US withdraws, the Iraqi Sunnis will be annihilated from both the Syrian and Iranian axes.

America's failure to immediately effect a militarily and political response to the reality of the Fourth Reichastan now will be even more irrevocably devastating to world peace and security than America's ignoring the Third Reich's exponentially strengthening axis of the Thirties. In the Thirties, there were vast defensive oceans and Germany did not possess either a nuclear potential or vast access and control of oil. Today, the exact opposite is true: Iran has a burgeoning nuclear potential and the Iranian Fourth Reichastan sits on vast natural oil reserves. Additionally, Iran sits astride tottering and cowering Sunni paper kingdoms whose massive strategic natural resources are necessary for today's global economy. The ambient area holds two-thirds of the world's proven oil reserves, and therefore is no "Vietnam." As such, Iran possesses and exerts incalculable economic leverage over the superpowers of China and Russia. Finally, one must add to this volatile mix the sorry fact that MAD does not act as a deterrent to Iran but an incentive. In sum, this is not a pretty picture.

Today, Iran correctly sees Israel's existence as a de facto projection of American military power and as the sole remaining obstacle to its future hegemony of the Middle East and the world, as Hitler saw Great Britain as the sole obstacle to his hegemony of Europe. Iran has learned from Germany's mistake in WWII and Saddam's mistake of the "Nineties," and is not wasting any time or energy to occupy a defeated France or to consolidate a fractured Middle East before it attempts to destroy America's WWII forward base equivalent of Great Britain: Israel. In fact, the ostensible balkanization of the oil rich Sunni Kingdoms provide a false appearance of strategic division which masks Iran's true amassing strength. Iran's ultimate destruction of Israel will cripple America's ability to wage a winnable World War against Iran before that war even begins. Consequently, America can expect unrelenting hot and warm wars of attrition by Iranian-armed proxies against Israel and U.S. forces to rid itself of these sole remaining obstacles to what will be its total Middle East hegemony. Or, alternatively, in the wake of a catastrophic US Iraqi defeat/retreat, Iran will unquestionably militarily occupy Southern Iraq to Jordan. It will then hold a Sword of Damocles over the heads of Saudi Arabia, U.S. CENTCOM at Qatar, and the entire US 5th Fleet at Bahrain.

Unless America games out, takes action and protects itself and its allies against the possibility of a Fourth Reichastan now, the "Thirties" may rapidly become the "Forties," or even the "Fifties" where Iran will have won.