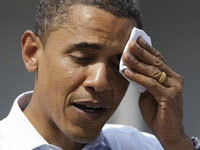 Rumblings and grumblings in America and the voice of reason has finally spoken. America has asked a question to His Majesty Obama and our representative still lives! Of course since Velma Hart is now famous she cannot be hurt by the Godfather and his Chicago thugs.

Who is Velma Hart? She is the one who punched Obama in the face on American TV and got away with it. She asked a question the AMERICAN MEDIA SHOULD HAVE ASKED LONG AGO!

Obama cannot call her a member of the Tea Party. Velma Hart clearly said she had supported Obama before. Now, of course with the answer "Mr O" gave her, she probably just signed up for the Tea Party. The Tea Party is a reference to the first organized protest by Americans in Boston 1773, against the British empire and its high taxes.

The Tea Party movement are Americans just fed up with the lies from big government. They are Independents, Republicans, Democrats and Libertarians.They want less government spending and waste. They last protested at the foot of the Lincoln Memorial Saturday August 28 in Washington D.C.. Martin Luther King's niece, Alveda King was there to quiet the media's chant of "racism" against her white friends.

Alveda King proclaimed, "If Uncle Martin could be here today ... he would surely remind us that as brothers and sisters, united by one blood in one single race, the human race, we are called to honor God and to love each other." She further said the purpose of the rally was "to focus on honor and on the content of our character, and not the color of our skin," echoing the words of her uncle's famous speech of 1963.

By the way, don't let the American media fool you when they say the tea party is all white. I have seen different races. It is mostly white but so is the USA. That is just a fact. If you are a minority conservative you are "invisible" to the American media. Why? Because it shatters the Democrat lie that all conservatives are white bigots. If the Tea Party is really racist would Alveda King give speeches at the Tea Party rally?

Just as Alveda King inspired millions so Velma Hart moved the hearts of millions with a triumphant shout from the "Battle Hymn of the Republic":

"Mine eyes have seen the glory of the coming of the Lord He is trampling out the vintage where the grapes of wrath are stored, He has loosed the fateful lightening of His terrible swift sword His truth is marching on."

America was united again with our voice being heard. When does a peasant tell a king, "I'm tired of you!". When can a common man or woman tell the king, "This crap of yours sucks! Here's my peasant foot up your royal buttocks!" America's question came clear and loud as the sound of the Liberty Bell when it rang out the public reading of the Declaration of Independence. "When is the change you promised comin' ??? We're still waiting!!!"

Obama could not lift a finger when Velma Hart asked him. He was down for the count. "Where were all the easy questions?", he thought. "Mr Soros said this would never happen!. Who let her in??? Hillary should be answering these questions! Whose dumb idea was it to have a townhall meeting anyway?! VELMAAAAAAAAAAAA! YOU'RE BLACK! YOU'RE SUPPOSE TO LIKE ME!!!"

"Maybe it was just a nightmare?", he thought. "Michelle is going to leave me and now this". "Psssst! Mr President, Mr President! You're on TV! Please answer her!", whispered the producer.

Obama's glazed and confused look left him and he asked himself, "Oh yeah, what was that question again?" Feeling no moisture on the seat of his pants he decided to go on with the show.

Now obviously what I just wrote was not reflected on camera but as surely as the Gulf of Mexico is oily, you can be sure it happened. At least in Obama's recollection.

Let's play that again only in slow motion. Here is the actual transcript of the conversation that took place in Washington D.C., Monday September 20th. Many journalists lost their lunch that day.

Poor journalists. They were once beloved sons and daughters of the president. Now they are only step-children. Be still my beating heart. Never fear! Velma Hart is here!

HART: I am a chief financial officer for a veterans service organization, AmVets here in Washington. I'm also a mother, I'm a wife, I'm an American veteran, and I'm one of your middle-class Americans. And quite frankly, I'm exhausted. I'm exhausted of defending you, defending your administration, defending the mantle of
change that I voted for -

HART: -- and deeply disappointed with where we are right now. I have been told that I voted for a man who said he was going to change things in a meaningful way for the middle class. I'm one of those people, and I'm waiting, sir. I'm waiting. I don't feel it yet. And I thought, while it wouldn't be in great measure, I would feel it in some small measure.

I have two children in private school. And the financial recession has taken an enormous toll on my family. My husband and I joked for years that we thought we were well beyond the hot dogs and beans era of our lives.

HART: But quite frankly, it's starting to knock on our door and ring true that that might be where we're headed again. And quite frankly, Mr. President, I need you to answer this honestly, is this my new reality?

Obama was shocked and needed a teleprompter for an answer. "We're moving in the right direction." said Obama. "YES!", sighed Pelosi off stage.

OK, great Mr President! We were better off 2 years ago and it is worse now. RIGHT DIRECTION he says? Sounds like the famous last words of General Custer at his last stand. Yes, Hitler was going in the right direction when he attacked Russia. The Titanic was going in the right direction too. Obama and his fairy tales? Or is it the "Obama Comedy Show" ? The townhall idea back fired like an exploding cigar in his face. IN YO' FACE!

What is Obama and his vermin Democrats planning? "Let's see, we can't use the racist card again", Obama said. "Let's tell'em its Bush's fault!", shouted Barney Frank. "Shut up Barney!", screamed Pelosi. Hillary chuckles out of her chair. "I think...people don't like President... Obama because... he is black", mumbled Jimmy Carter. "Velma is black, you idiot!", screamed Pelosi. "Let me help you Monica, I mean...Hillary", said Bill Clinton as he helped Hillary to her chair.

"OWE, OWE!", yelled Bill Clinton as Hillary was punching him. Obama said, " I told the American public that the troops are coming home from Iraq. That's one promise!". "Yeah, but you told half of them to stay! We're still in freakin' Afghanistan for crying out loud!, whimpered Barney Frank. "The public doesn't believe us anymore. We need you to make more speeches in front of kids. Let's tell the media only close ups on your face so they won't notice Michelle is gone. We don't want her to say "whitey" again. Is Michelle still in the closet???", Pelosi nervously said. James Carvelle screamed like nails on a chalkboard, "You greased up the gulf and the American people! What the hell are ya' gonna say next? America, grab your ankles!???"