No evidence of Hawaiian birth for AKA Obama. What about Kenya?

Obama's 'Certification of Live Birth' form reveals his Birth Registration was FILED in 1961 but was never fully ACCEPTED by the Hawaiian State Registrar's Office. 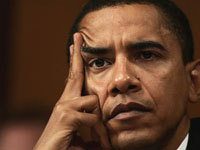 Hawaii is covering this up for political reasons to protect Obama. Only they know the ultimate reasons they are all willing to commit Misprision of Felony at this point in time given the mounting evidence that Obama was not physically born in Hawaii. Obama may have amended his record since 1961 to try to reinforce and cover up the original fraudulent filing. But his online COLB clearly shows that when it was FILED it was never finally ACCEPTED. This is a national disgrace that our entire system of laws including the Constitution and all legal records are being subverted and subordinated to cover up for Obama's continued fraud on the nation as to his true legal identity. What is so important about this one man that Hawaii is willing to see the nation destroyed by his corruption and lies from birth by his family and continued on all his life by Obama. The man is a grifter and conman. See this catalog of evidence that shows by the preponderance of the evidence that Hawaii and the nation are the victims of birth registration fraud by Obama's family in 1961: http://puzo1.blogspot.com/2010/05/catalog-of-evidence-concerned-americans.html

4. NO EVIDENCE OF A HAWAIIAN BIRTH FOR AKA OBAMA - WHAT ABOUT KENYA?

As for AKA Obama's birth in Kenya we hear this from attorney Mario Apuzzo "We have not heard from one international, federal, state, or local police or security agency that Obama's birth place has been officially confirmed.

An Investigator working for Philip Berg, Esq. learned the following which is contained in the investigator's affidavit dated October 30, 2008, that was filed with a Federal District Court in the case of Berg v. Obama, O8-cv-04083: Obama's step-grandmother, Sarah Obama, told Bishop McRae, who was in the United States, during a telephonic interview on October 12, 2008, while she was in her home located in Alego-Kogello, Kenya, that was full of security police and people and family who were celebrating then-Senator Obama's success story, that she witnessed Obama's birth in Kenya, not the United States (the English and Swahili conversation is recorded and available for listening). She was adamant about this fact not once but twice. The conversation which was placed on speaker phone was translated into English by "Kweli Shuhubia" and one of the grandmother's grandsons who were present with the grandmother in the house. After the grandmother made the same statement twice her grandson intervened, saying "No, No, No, He was born in the United States." During the interview, the grandmother never changed her reply that she was present when Obama was born in Kenya. The fact that later in the same interview she change her statement to say that Obama was born in Hawaii does not change the fact that she at first stated twice that she was present when Obama was born in Kenya. I cannot imagine a grandmother not knowing whether she was present or not at the birth of her American Senator and U.S. Presidential candidate grandson.

The investigator then personally went to the hospital in Mombassa, Kenya. He spoke with the Provincial Civil Registrar and he learned that there were records of Ann Dunham giving birth to "Barack Hussein Obama, III" in Mombassa, Kenya on August 4, 1961. The investigator then "spoke directly with an Official, the Principal Registrar, who openly confirmed the birthing records of Senator Barack H. Obama, Jr. and his mother were present, however, the file on Barack H. Obama, Jr. was classified and profiled. The Official explained Barack Hussein Obama, Jr. [sic] birth in Kenya is top secret. [H]e was further instructed to go to the Attorney General's Office and to the Minister in Charge of Immigration if [he] wanted further information."

It is alleged that the Kenyan government authorities have refused to cooperate and have thwarted all efforts by anyone to obtain any documents concerning Obama."

That is a real mind bender. Let's see; AKA Obama wasn't born in Kenya but his birth place is declared to be "top secret" by Kenyan officials. There are no records of AKA Obama being born in Kenya and those nonexistent records are being withheld and are "top secret". That sounds so much like what the official position of AKA Obama could be; "I have nothing to hide but I'm hiding it."

5. THE CRUX OF THE LEGAL STRAW THAT CAN BREAK AKA OBAMA'S BACK

Another piece of information that many fail to realize is that in the birth certificate cases, all that is needed is for the case to be heard. This case will be over in the "Discovery" phase. Before a trial starts, both sides are required by the court to put all their cards on the table to avoid "trial by ambush." The judge orders all evidence to be presented by both sides. Since this case is about discovering documents that are hidden, the case will be decided by court-ordered presentation of all relevant records. Lawyers in birth certificate cases don't need to win a trial; they only need to get a trial.

For those of you who think ridicule and name calling are effective debate tactics, I refer your kool-aid drenched, tin foil protected brains (a dose of your own medicine) to this article from American Thinker: Why the Barack Obama Birth Certificate Issue Is Legitimate .

6. ENOUGH ON THE HIDDEN BIRTH CERTIFICATE AND FORGED DOCUMENTS. WHAT IF AKA OBAMA WAS ACTUALLY BORN IN HAWAII?

What about the legal team that is keeping AKA OBAMA's college records hidden? Several people probably know what they are hiding. The best guess as to what is so secret isn't likely to be bad grades. More likely his admission papers will say he was a foreign student, or that he was receiving financial aid as a foreign student. How many people do you estimate already know what is on AKA OBAMA's college documents? Those records were handled routinely for more than 20 years. How many personnel in the registrar's offices of Occidental College, Columbia University, and Harvard University have seen AKA OBAMA's records and know what is in them? How many of those people would be willing to talk about it, or maybe even "leak" just one sheet of paper that would put even more cracks in AKA OBAMA's mirror? Is that number likely to be zero? Do you think that AKA OBAMA worries about how many people know something that could destroy his career? Fear of being "found out" is an obsession for NPD types. The Cost to hide Obama's past now 1.35 million.

7. THE CATELOG OF HIDDEN DOCUMENTS FROM AKA OBAMA'S PAST

So far we have only talked about the original birth certificate, supposedly locked up in Hawaii, and AKA OBAMA's draft and college records. Already the potential sources for leaks are numerous. And you can bet that AKA OBAMA and his lawyers are concerned about many more possible leaks than these.

Those who strive to legitimize AKA Obama have made much of the questionable "birth announcement" that may have been published in the Hawaiian newspapers. This "evidence" if so flimsy that refuting it may actually lend substance to the claim.