This is America, the beacon of freedom 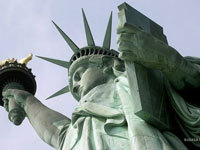 The ninth anniversary of September 11 attacks coincided with the offensive insults of the Americans to the holiest book of 1.5 billion Muslims around the globe. According to reports by the Reuters, near Nashville, Tennessee, evangelical Pastor Bob Old and another preacher used lighter fluid and a lighter to burn at least two copies of the Quran. Old called Islam "a false religion."

It was also reported that the American protesters objecting to the construction of an Islamic center and a mosque adjacent to the Ground Zero site tore pages from the Holy Quran and set them alight. Reuters also dispatched reports from the similar abuses to the Holy Quran in Lower Manhattan.

The terrifying plan of burning the holy book of Muslims was initially proposed by the pastor of an obscure, small, non-denominational church in Gainesville who had announced that he would be burning copies of the Holy Quran on the anniversary of 9/11 attacks. The plan was described by the global media as a publicity stunt by someone whose desire for gaining some reputation and attention by the international media propelled him towards thinking of such an evil action.

Although a global wave of protests which erupted immediately after Pastor Jones announced his plan for burning the Holy Quran on September 11 dissuaded the attention-seeking preacher from realizing his mischievous intention, he inspired other people to go ahead with the plan and abuse a Holy Book which is venerated and adored by millions of people in the four corners of the world.

Insulting the holy book of Muslims in the United States put an emphasis on the fact that those who consider themselves the harbingers of mutual understanding, religious toleration, peaceful coexistence and freedom of expression are merely making unfounded and baseless claims which they perpetually fail to adhere to in practice. These are only claims which are designed to portray an idealistic image of the United States and its culture. Burning a holy book is the clear manifestation of an uncivilized and barbaric action for which there can't be any justification or explanation.

Muslims around the world are subject to the most unfair convictions and unjustifiable discriminations. They're usually labeled as extremists, fundamentalists and radicals. They're always judged with pessimism and negativity. Every terrorist operation is attributed to them and the most offensive charges are leveled against them as unjustly as possible. So, what's the reality of Islam? Is it a religion of violence and barbarism, as the Americans claim? Does it further and spread terrorism and extremism? Is Islam a "false religion", as the evangelical pastor has claimed? A general investigation of the Islamic scriptures and Quran can provide the response to all of these questions. There are numerous indications that Muslims are among the most pacifist and peace-lover people in the world. Islam has categorically rebuffed violence and aggression towards the people and condemned those who use force against others and undermine their esteem.

The most fundamental pillar of Islam is based on sociability, interaction with the other people and respecting their prestige and stature. The Holy Quran on several occasions has underlined the importance of revering the humankind as the most prestigious and valuable creature of the Almighty God. In the verse 70 of the chapter Al-Isra', the Almighty God introduces the man as His most admirable and brilliant creature, saying that he is superior than all of the other beings on the Earth: "It is a favor that We have honored the sons of Adam and blessed them with conveyances on land and sea and provided them with good and pure things and exalted them above many of Our other creatures."

As a vanguard ideology, Islam has always emphasized the essentiality of behaving with the followers of other religions with respect and admiration. It was once asked from Imam Reza, the eighth Twelver Shiite Imam and the seventh descendant of Prophet Muhammad that how should one pay tribute to the Jews and Christians who don't follow the religion of Islam? He answered: "tell them may the Almighty God bless the world for you."

Those who claim to be the guardians of human rights have so far killed more than 1 million innocent civilians in Iraq since they launched their so-called War on Terror. One may wonder whether these 1 million people have been human or not. Islam has never claimed to be a charter of human rights, but in actuality, it is the most comprehensive and all-inclusive declaration of human rights. It pays attention to each and every aspect of human's dignity and disallows the destabilization of man's decorum. In the verse 12 of the chapter Al-Hujuraat, the Almighty God prevents the believers from backbiting, being suspicious about the others and spying: "Believers, avoid being excessively suspicious, for some suspicion is a sin. Do not spy, nor backbite one another. Would any of you like to eat the flesh of his dead brother? (by backbiting) You would surely detest it. Have fear of Allah. Surely Allah is much prone to accept repentance, is Most Compassionate."

In the verse 13 of the same chapter, the Almighty God has highlighted the fact that the most venerable and esteemed people are the ones who fear Him the most and do good deeds as a result of this fear. This shows that people, regardless of their religion, ethnicity, gender and language, are equal in Islam and their decency is the basis of judging their actions: "Verily the noblest of you in the sight of Allah is the most God-fearing of you."

With these descriptions, it will become clear that Islam is a religion of toleration, peace and friendship. It pays tribute to all of the religions which had preceded it and obliges the Muslims to live along with the followers of other religions peacefully. Islam confirms and verifies the authenticity of previous holy books and asks the Muslims to be benevolent and compassionate with the "people of faith".

Burning a holy book which is full of instructions for a peaceful, serene, pure and happy life indicates nothing but ignorance and animosity. More than 1.5 billion people around the world read the Holy Quran to learn from its insights and teachings. Burning such a book simply indicates the lack of tolerance and freedom in a country which considers itself a beacon of freedom.

Thanks God, Muslims have always treated with the followers of other religions respectfully. They never drew insulting cartoons of Prophet Jesus nor did they desecrate the Bible and Torah. The mainstream media in the West portray the Muslims as terrorists and extremists, but the Muslims around the world have righteously demonstrated that they are worthy of praise and admiration for their excellent demeanor and their peaceful disposition.