Death by Stoning, Banning the Burqah and Moral Imperialism

These are difficult times because people choose to make them difficult and could be simple, common-sense times if the media chose to talk sense instead of hyperbole. Just because a woman wears a burqah does not mean she is going to blow herself up in a metropolitan train. Is death by stoning a savage and barbaric practice or should it be relegated to the realm of local custom and tradition? 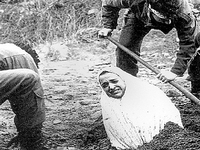 Death by Stoning, Banning the Burqah and Moral Imperialism

We are facing difficult times. We have an insurgent Islamist movement called Al-Qaeda, we have ongoing wars in Afghanistan and Iraq, we have a situation of growing confrontation with the Islamic Republic of Iran, we have a confrontation of values in the heart of Europe, where in two countries the burqah (the full-body covering of the Islamic woman) has been banned.

If we want to sell copies of newspapers and magazines (and gain a fortune from advertisements) we can exacerbate the potential problems and whip people into a frenzy. Some call it information, others disinformation. We can claim that Al Qaeda is a dangerous international organization capable of carrying out horrendous attacks such as 9/11, among others. We can also claim that the 9/11 attacks were the result of a total lack of cooperation among the US intelligence agencies, to say the least, and that Al Qaeda today is basically a few brainwashed mentally challenged individuals who wish to set their underpants on fire in public places.

Or we may choose to describe the movement as something in-between, namely one with powerful resources which targets fanatics, turning them into killers in the name of some Quixotic non-existent cause which Islam or the Qu’ran never once referred to.

In soccer, how convenient this is for those who wish to sell vuvuzelas or shirts. In journalism, it serves the interests of those who wish to make a quick buck. In international politics, how useful it is for the myriad of organisms, government or not, which make a living out of the perpetuation of conflict and fear.

But making sense, not every woman who wears a burqah is a cross-dressed male terrorist with a pack of sugar and weedkiller on his back. So who has the right to legislate as to how free people are to wear what they want? And suppose a man wanted to dress in a burqah… because he wanted to? Or a dress for that matter? Is that illegal? And can women wear veils? And the burnusin, worn by men and women in Maghreb?

And the cross? Can I dress as a Priest and wear a Cross in public? And can a woman wear the hijab? If so why can’t she wear the chador or burqah? Can brides get married in veils?

And what about death by stoning? The world came out in favour of the Iranian woman Sakineh, sentenced to death by stoning in the Islamic Republic of Iran because she had committed adultery. And she was saved. But where is “the world” in the case of the 92 million girls in Africa who have to live with the effects of female genital mutilation?

Where is “the world” in the cases of torture aboard aircraft and ships and in the Guantanamo Bay concentration camp? So CIA operatives can mutilate and sodomise and cut prisoners without trial and a woman cannot wear her traditional attire? Israelis can bulldoze Palestinian homes and have nuclear missiles but…?

I do not eat locusts or snakes or spiders. But those who do so, are they to be classified as savages? I do not agree with the death penalty in any form, whether is it by stoning or by lethal injection or by hanging. Is one form more civilised than another?

Therefore despite the myriad of human rights treaties and declarations, why do we not sign, collectively, a Universal Declaration of Basic Human Rights which includes the fundamental right to an equal education, to equal opportunities, to the inviolability of the person? This includes a banning of any practice where power is exercised over the human integrity by other human beings.

I leave it up to my readers as to where and how far this goes.