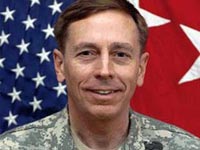 So General David Petraeus is back on the COIN campaign trail arguing that pacifying the Human Terrain (HT) is his number one priority. Petraeus’ model program for converting an indigenous human terrain that is opposed to US occupation to a pliant human terrain has been the troublesome US Army Human Terrain System run out of TRADOC’s G-2 (Intelligence) unit.

The world has heard the term of art, HT, for nearly five years now from Petraeus and his Apostles. It has also heard President Obama (a likely one term US president) take up the COIN-HT mantra from Petraeus and make it his own. Petraeus’ push to make COIN-HT the central war waging doctrine of the US Army—and National Security Strategy-- has produced truckloads of paper and likely has kept dying US paper mills in business. The number of reports, articles, briefings, transcripts, manuscripts, PhD theses, studies, power point presentations, field surveys, and books that discuss COIN-HT and the Human Terrain System would likely fill up the Washington Redskins’ FEDEX field.

And now as General Petraeus dominates flat screens all over the world, it should come as no surprise that a COIN-based communications game plan is being used by Petraeus to convince the USA’s Human Terrain (American people, the US Congress and influencers from every walk of life) that, like Felix the Cat, Petraeus can pull something out of his magic bag to stop the madness in Afghanistan and Iraq. Don’t forget, in the COIN-HT view, the battlefield—the HT—is global and electronic. This is no silly conspiracy. It is simply part of the process and very much a marketing campaign.

But the problem is that Petraeus’ magic bag holds nothing more than TRADOC’s woeful Human Terrain System and a covert intelligence program. This is a global kill/capture effort designed by Petraeus and Admiral Olsson (USSOCOM)—and approved by Obama--that not only seeks to wipe out those antithetical to US interests, but also enlists US businessmen/women, academics, journalists and US troops as global intelligence gathering platforms. We are all part of the COIN-HT analysis team now.

Petraeus has nothing more to offer.

And what has Petraeus accomplished in Iraq and Afghanistan and, for that matter, in his overall area of responsibility as CENTCOM commanding general. For example, how are things in Somalia? (AFRICOM is still ramping up).

Turmoil reigns in Afghanistan at every level political, social and economic. US warfighters there and in Iraq are sick and they are tired and want to come home. US warfighters certainly do not want to babysit civilian personnel from the Human Terrain System.

Over in Iraq, it’s not really that much better: power shortages, riots, over a million Iraqi’s displaced, Shia and Sunni at knife’s edge, Christians violently moved out of country, and unlimited corruption at the national level. The environmental situation in Iraq literally stinks as the US has left a toxic wasteland wherever it has encamped on a large scale.

Operation Iraq Freedom and Operation Enduring Freedom will be remembered as Petraeus’ Wars: a time when for-profit contractors outnumbered the uniformed services. A time when the reason to join the US military (besides a failing US economy) was simply an investment: training and experience that would lead to lucrative contracts in the private sector. Protecting and defending the US Constitution became little more than a Boy Scout Motto. The USA has been at war for so long that it became the new American pastime. The American lexicon is numb to the meaning of war, killed in action, maimed in action, torture, Guantanamo Bay, and rendition. Calls for a civilian warfighting cadre come from the White House. All of US government, all of society says the US Interagency Task Force on COIN. The National Security State is threatening the foundations of the democratic republic. Andrew Bacevich eloquently stated as much in a recent editorial.

Americans are now in uncharted waters.

In short, Petraeus has left a trail of destruction and controversy in his wake. And the larger issues of the direction of US democracy swirl around this General who is arguably the second most powerful—and untouchable—politician in Washington, DC. This is the portion of Petraeus’ record that PSYOPS/MISO/ has been so adroit at eliminating from the theater of Senate Confirmations and Sunday talk shows on the main stream media. It is one heck of an effort!

The Human Terrain System which Petraeus’ so strongly supports is a microcosm, a snapshot, of the tragicomedy of war, politics and—today--America itself. Those at the bottom suffer for the madness of those at the top. And for what? It does not have to be that way.