In Brazil, Prestige of Russia and Medvedev Growing in Public Opinion 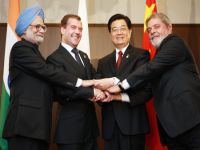 In Brazil, Prestige of Russia and Medvedev Growing in Public Opinion

Between Russia and Brazil, there is a large geographical distance, as well as cultural and political differences. To Brazilian public opinion, especially among the large and decisive middle class, Russia has always been a country and a people shrouded in mystery and enigmas, with which the Brazilian had not the least bit of sympathy and did not want any tie or relationship.

With the rise of young, courteous and communicative Dmitri Medvedev to the post of president of the country, Russia was viewed with some sympathy and even caused Brazilians to seek to know a little about the culture of the still mysterious Russian people for the vast majority of the population.

The episode involving the question Tehran's nuclear program, a strong ally of Moscow, caused a strong uncertainty in the four corners of the Earth due to the unpredictable and controversial Iranian president, Mahmoud Ahmadinejad, a spokesman for Ayatollah Ali Khamenei, the man who really rules in the Islamic Republic of Iran. Russia and President Dmitri Medvedev are harbingers of truthfulness, reliability, seriousness and fairmess and, in fact, are forces for the preservation of mankind and universal brotherhood.

Amid the diplomatic attacks between Americans and Iranians, the sophistries and joking statements of Brazilian President Luiz Inacio Lula da Silva on nuclear issues, Russia's Dmitri Medvedev emerged, betting only 30% optimism on the success of the agreement coordinated by Brazil and Turkey on the Iranian nuclear program.

While declaring that he only believed there was a 30% chance for the success of the agreement, the Russian president has more or less done so for reasons of courtesy and reverence for his visitor, Luiz Inacio Lula da Silva. President Lula bet all his chips on the success of the agreement. With this single move, he put at risk the prestige of Brazil by betting on a 99% chance on Mahmoud Ahmadinejad, who in fact is not in charge and does not even do the deciding in the name of Teheran.

The unknown stranger, Ayatollah Ali Khamenei, actually has the supreme, absolute and undisputed final word on the Iranian position, and he has said nothing publicly about the deal. The celebration of the agreement was on account of Brazilian President Luiz Inacio Lula da Silva and Turkish Prime Minister, Recep Tayyip Erdogan, who had as an accomplice Iran's Mahmoud Ahmadinejad.

In Brazil, political observers said that "Russia preferred to jeopardize its relations with friendly Iran, instead of leaving in danger the security of the planet."

A primary school teacher, mother of five children, living on a beach off the Brazilian coast, was emphatic in saying that she always had a fear of Russia and its people, because of the mystery surrounding them, but after the firm and humanitarian decisions that their president (Dmitry Medvedev) has taken "I started to have interest in them and will try to know at least a little of this country, this people, and especially the president."

For the next Carnival, the largest popular festival in Brazil, only likely to happen next year, a samba dancer in a school of samba in Rio de Janeiro said a suggestion will be made to those in charge of the school's script in 2011 to have a tribute to Russia and to the Russian president."

A red flamengo, who is in Africa, cheering for Brazil, said that if Russia were in the Cup, Russia would be, after Brazil, who would have his support to win the Cup in 2010.

To see the numerous e-mails from readers interested in information on Russia, its people and its government, Pravda does an abridged x-ray of the country which has haunted and enchanted the world with remarkable footballers and insurmountable Olympic athletes.

The position, actions and universal vision of the Russian government under Medvedev on political, nuclear and humanitarian issues has been touched upon. Below is a summary of facts about Russia:

Editorial Note: The political observers are absolutely in error to perceive of any actual danger from Iran's peaceful nuclear program. Now we shall see if placating the west to the detriment of a friend and partner will be worth it for Russia.