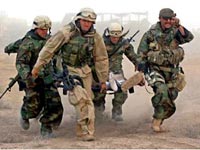 “The soldiers are too much trouble for this civilian program [HTS]. The people who run this shit do not care about the training or the candidates. This is about contractors and others making money and that is the bottom line. HTS is a money making scam run by a shit load of retired officers and contractors”

“What he told us over a few beers is downright disgusting. Human Terrain Team member’s double dipping their per diem meals and claiming false time worked…”

Observers say that the figure $500,000 was written on a whiteboard in a training room at one of the HTS training facilities. A contractor was said to have looked at that figure and remarked, “It is inflated by a half again.” Sources say one of the HTS contractors is being “black balled” to create what they refer to as “The Mike Edwards Exercise Division.” Evidently, Edwards—a member of the HTS Training Directorate--wants his division to be staffed with personnel up to the 150 mark.

HTS management evidently continues to work on standing up new training facilities for HTS. This effort is supposed to take somewhere in the vicinity of 18 to 24 months to complete. Many sources say that the pricey new headquarters is not the answer to collocating offices, classrooms and residences for students.

Other proposals submitted to management to use available unoccupied buildings that could “save the government millions” were rejected. That is “not part of the plan” said management. Observers say, in one instance, program management paid $15,000 for training rooms they did not need.

It is reported that General Dynamics recently lost its HTS contract for IT support. General Dynamics staff members were apparently informed on 14 April 2010 that they could “take a new BAE contract or move on”, said sources. Some sources wonder how BAE got the contract so fast.

And once again, MAP HT rears its non-functioning head. According to sources, “Overwatch is sub-contracted by General Dynamics which is sub contracted to BAE to K3 to teach HTS MAPHT. But it does not work! Supposedly one HTS manager asked Overwatch to work the bugs out for free!” One supposes that General Dynamics is not in this convoluted equation any longer. But who knows for sure?

What is it going to take for the US Army to fix this mess? There are new reports of other HTS related casualties that management is keeping a close hold on. So far, this is the known count: