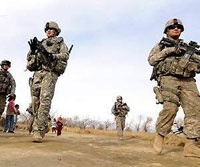 “These people will scrimp to save dimes when it comes to actually paying employees – but Steve Fondacaro and Montgomery McFate can blow a fortune in Paris attending some software meeting. Amazing!”

“Some more lunacy from the Human Terrain System Files”

At the end of January 2010 there was another panicked document signing moment that is all too common within HTS. Usually it is because someone is trying “to cover their ass once again,” say sources. For example, many in the program were apparently given a document titled DD 2356 "DOD CIVILIAN EMPLOYEE OVERSEAS EMERGENCY ESSENTIAL (EE) POSITION AGREEMENT" forms that had to be signed immediately, scanned, and sent to the program manager forward.

Observers say this came about because of injuries sustained by Scott Wilson. Turns out his medical treatment was delayed because his status couldn't be verified.

“Great move!” said sources,“ but Fort Leavenworth [HTS HQ] didn't catch on to the fact that these forms need to be filled out BEFORE an offer of Federal Employment is made - not afterwards. This is by statute because being EE also requires Smallpox and Anthrax shots, which some people don't want to get and would likely seek other employment opportunities instead. This needs to be made clear to prospective personnel before they are made an Offer of Employment - not once they've been in the field for six months!”

Sources say that there are now over 100 US Army Civilians “running around in Iraq and Afghanistan who are designated as EE but not compliant with the regulations.” Program managers forward are apparently not aware of the requirements. “There has been no effort on Fort Leavenworth’s part to address this problem other than to make sure that advertisements running on USAjobs.gov now state the EE requirements for Smallpox and Anthrax shots.”

“It would seem that the US Army TRADOC Command has entered a time warp. They have dusted off the files on CORDS and the old FAO program. The new COIN manual and doctrine is the Holy Grail! The message being sent is this: Use COIN or else!”

HTS timesheets don't allow for the inclusion of Sunday Premium and After 6:00pm differential pay because the “proper codes aren't even on them, “ said observers. “We’ve had four different timesheets in this last year alone and none of them contain all the codes we need to actually use.”

One of the biggest problems with the Human Terrain Analysts (HTA’s) is that they're of Afghan or Iraqi descent and it is hard to get them cleared, said observers. Some say much of the difficulty is that candidates lie on their security applications or have so many family ties overseas that “the investigation becomes almost impossible.” Nonetheless, many receive an Interim SECRET from Fort Leavenworth so they can tool down to Fort Benning for training and maybe even deployment. When these problems are discovered, sources say, they can't get a final adjudication and have to be flown back to Fort Leavenworth in order to get them resolved, or in some instances they get dropped from the program entirely.

“So you have a bunch of guys that train for six months in the States. They then arrive in-country [Afghanistan or Iraq] and then have to be flown home roughly 90 days later because of security issues. The program is so desperate to fill the classrooms that the system of accepting unqualified candidates appears to be encouraged. The "Money Maker" for HTS---other than the MAP HT hardware /software and SSRA fiasco) is the training portion at Fort Leavenworth. Everyone involved in the training portion is making money hand over fist. BAE gets rich, the retired O-5's and O-6's get rich during that idiotic Weston Resolve session for two weeks, K-3 (computer training) gets rich, and the trainers get their cut as long as bodies keep circulating through The Landing. And all of this at Taxpayer expense!

“The HTS Program Manager was scheduled to make a magic appearance here to observe the wonderful MAP HT training program unfold. However, while en route, he was called back to HTS Headquarters to discuss the results of an employee survey that was sent out to HTS US Army civilians about a month ago. The response rate was dismally low (30%). Those that did respond apparently did so with a vengeance. Direct criticism of MAP HT and questionable activity, falling under the ‘Waste, Fraud, and Abuse’, statutes were apparently brought up by more than one person.”

Among the litany of woes within the US Army’s Human Terrain System, it is difficult to pick one that outdoes the other. However, in the last few months, MAP HT has come under much criticism from a variety of sources in Washington, DC and out-CONUS. Not only has MAP HT failed to materialize in any useful form, but also that “MAP Anything” is hardly a novel concept in 2010. Geospatial analysis, mapping, modeling and simulation can be done by just about any competent computer user these days. Indeed, there are dozens of online programs available at no cost, plus Google Earth is out there with many API’s for use. It’s actually become a popular pastime in the USA.

To map the human terrain of one’s neighborhood, say, one need only observe movements, dress, speech, trends, political comments, etc. and input that data into, say, MAP HT Neighborhood. The same could be done on a visit to a community in another country. Just bring the survey data back and plug it in to your very own geospatial program.

We Are All Human Terrain Team Members!

Before getting back inside the US Army HTS, it’s worth going off on a short but worthy tangent. Americans are all intelligence collectors now. In fact, that is precisely what CENTCOM CG David Petraeus’ seems to have envisioned long ago. To enlist the nation to become Human Terrain Intelligence Gatherers in the global wars on insurgency, drugs, crime, or whatever other threat/war there needs to be. His human terrain concept has, remarkably, been hammered into the fabric of national military strategy and tactics, and President Obama’s recently released National Security Strategy of the USA (NSS).

According to the New York Times, the Petraeus’ Plan requires “American troops, businessmen/women, and academia…” to join in the fight. Was anyone really surprised that kill-capture would have to go way beyond CENTCOM’s AOR or into all other COCOM AOR’s? President Obama’s NSS buttresses the case. The public is called forward, again, to be on the watch for the “enemy.” American’s will be engaged further at how best to do that in the coming years. Obama goes on to say that national security is indistinguishable from homeland security.

Petraeus and Obama (plus Admiral Olson of SOCOM) have created arguably the most aggressive covert/overt campaign to counter an “enemy” since WWII and the Cold War. All levels of US society are now being asked to be on guard in this national/global effort in an uncertain world.

This truly is Whole of Government and Whole of Society as depicted by the logo for the US Interagency Task Force on COIN. So be it.

But when the day comes to pass that the US becomes engaged in a 20th century style conventional land war–and it will—America better be able to rapidly set aside COIN/HTS as the central focus of US military strategy/tactics.

There is grave danger in betting the country’s future focused maniacally on this approach.

It’s official. MAP HT, “The boondoggle of all boondoggles raised its ugly head in a big way.” Sources say “Steve Fondacaro got a weed up his ass about a month ago and mandated that all teams attend MAP HT training.” “That was a great plan,” they say, “except the crap doesn’t work. It consists of a bunch of outdated servers sitting in Pelican Cases that are gathering dust in various corners of Afghanistan and Iraq.” Not deterred, an MTT (Mobile Training Team) began its MAP HT Road Show starting with HT’Ts in Kandahar. Subsequently, when three groups of US Army Civilians failed the week long course, an individual employed as a US Army contractor threatened them all with being fired.” That action is in clear violation of Human Relations procedures covering US Federal Employees.

The same contractor, according to sources, is responsible for “pushing the SSRA–another taxpayer rip-of”– when not trying to sell MAP HT”. Sources claim, “He is in bed with yet another US Army contractor “to get MAP HT crammed down everyone’s throats at the behest of Steve Fondacaro so his buddy Dan Wolf can get richer. Steve set him up to supply all of HTS’ computer systems and equipment through a company his wife apparently owns.”

It is reported that, “to date MAP HT has cost the taxpayers some $40 million for a pile of junk that’s not being used. The kicker is that it finally has received some kind of initial accreditation from the U.S. Army to be used on the NIPR (unclassified) network where it does little good.” The vast majority of HTT reports are posted on SIPR and CENTRIX-I, not NIPR . Further, the licenses for Analyst Notebook and ARC GIS have expired. Sources say “it’ll take another $60 million to get the system operating and usable.” Evidently, Fondacaro is trying to get the $60 million slipped into the Army’s O&S budget request so it will not be noticed.

HTT’s are apparently on the move now in Afghanistan again–at considerable expense–to attend another MAP HT training gig conducted by Wolf and the two US Army contractors cited above. Sources say one BCT Commander had to delay a major campaign for a week since a “gung-ho HTT Team Leader (who imploded his own team in Bagram previously) mandated that his ENTIRE team attend MAP HT – leaving the BCT Commander without HTT support until they returned.”

“The general public does not have any clue how serious an issue it is for us in HTS.”

There is an internal tracking system known as Request For Support (RFS) where compensation matters are tracked. There are “well over 1,000 open requests being tracked.” Sources say, the overwhelming bulk of these are related to pay issues. “An important point to consider is that each RFS may contain several problems for one HTT member from one pay period, or the RFS may include an entire HTT’s worth of problems. Multiply each pay issue in RFS by four or six times and the extent of this becomes apparent.”

Evidently, some HTT members are owed $15,000 or more for services rendered.

It is all a “big yawn” say observers back at Fort Leavenworth. “The individual person who processes the civilian payroll shows outright animosity towards the US Army Civilians and routinely decides on her own what hours someone actually worked instead of following what was on the timesheet/timecard”.

It is reported that one team was “shorted” holiday pay and when they informed the person who processes the payroll, she shot back a reply that the payroll would be adjusted to reflect the hours worked (even though it was a holiday period). It took nearly four months to fix.

HTT’s have reportedly been denied overtime premium pay for working past 6:00pm. This is a requirement mandated by US Federal law. “Attempts by the USFOR Human Resources representative to get this resolved have been met with stone-walling from HTS HQ. They refuse to return emails sent to them by the HR representative.”