We Are All With the MV Rachel Corrie

Will Israel perpetrate another massacre? Will there be another act of piracy on the high seas? Will Tel Aviv torpedo the MV Rachel Corrie, an Irish ship travelling to Gaza under the auspices of International Law (UN Resolution 1860)? Is Israel planning another USS Liberty incident? 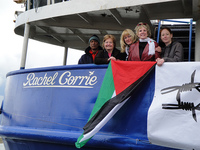 We Are All With the MV Rachel Corrie

For Israel’s information, the UN Resolutions are legally binding under international law and how can Israel, as a UN signatory state, refuse to abide by them and further to that, massacre those who uphold them? The logical outcome should be Israel’s expulsion from the United Nations Organization, for to be a member of the international community, you have to act like one.

Since Israeli Prime Minister Binyamin Netanyahu (not known to be the brightest bulb in the box) seems not to understand the terms of UN Resolution 1860, let us spell it out here loud and clear: here it is. It was passed by the United Nations Security Council in 2009 and has 9 (nine) clauses.

Clause 4 (Four) states: “The Security Council calls on member states to support international efforts to alleviate the humanitarian and economic situation in Gaza, including through urgently needed additional contributions to UNWRA and through the Ad Hoc Liaison Committee”.

Michael Martin, the Irish Foreign Minister, has told the Irish Parliament that “We will be watching this situation very closely – as indeed will the world – and it is imperative that Israel avoid any action which leads to further bloodshed”.

Israel’s claim that its actions were justified aboard the Freedom Flotilla because its troops were attacked first are as risible as they are stupid: if a pirate boards your vessel, you fight back.

Just as Israeli warplanes and torpedoes sank the UN research vessel USS Liberty in 1967, slaughtering 34 American servicemen and wounding a further 171, it appears history is repeating itself.

The international community understands Israel’s history and the history of its people, we understand its concerns and fears regarding terrorism. What we do not understand or accept is flagrant breaches of international law, massacres, kidnapping, theft, stealing lands outside the 1948 borders and cruelty.

Israel has to understand that to be a respected member of the international community, you have to behave like one, not a like a terrorist state and a pariah.