During the Cold War five major international trends developed. Going from right to left we had conservatives, Christian Democrats, liberals, social democrats and Communists. To a large extent the democracies of Europe and in many others in the West, such a system of parties was noted. 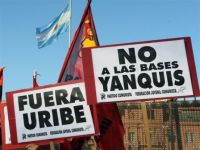 Not long before global bipolarity came to an end a piece of international news was emerging: the 'green'. They were noted for their defense of the environment, pacifism and approach towards reforms that will reduce social inequalities and those that exist between races and sexes.

The principal base of the greens ended up being the Franco-German axis which is the pillar of the European Union. Former anarchist leader of the student revolt of May 1968, Cohn Bendit, a German who was living in France, became one of the symbols of the new movement.

On the European continent, the greens became minority partners in coalition governments, but never went so far as to lead a single country in the world.

In Britain, the Greens were the party that grew most in the European elections of 2009, and have gone so far as to elect the vice-mayor and president of the Greater London Assembly, but only since May 6 have they managed to obtain their first parliamentarian.

Antanas Mockus, as well as two other former mayors of Bogotá (Enrique Peñaloza Luis Garzón), recently joined the small Green Party, which has been completely transformed. According to the latest polls Mockus is the current favorite to win the second round in Colombia.

A green victory in the second most populous Hispanic country of the world would significantly change this international flow. On the one hand it would give a major initiative to develop in the Americas and worldwide. On the other hand, it would imply an ideological shift.

In their countries of origin (such as Europe, USA or Australasia) the greens are usually located to the left of the social or political spectrum. In contrast, in Colombia, Mockus is on the right of the center Democratic Pole.

Instead of questioning neo-liberalism, wanting a 'dialogue for peace talks' with the guerrillas or requesting the removal of any foreign military bases, as do the European Greens, Mockus proposed the free market, the FTA with the U.S., following the harsh policy against the FARC insurgency (though subject more to the 'legality') and he accepts the presence of U.S. troops at bases in Colombia.

The 'new' greens with Mockus play a role similar to the 'New Labour' Blair had on world social democracy: to push their respective international current towards looking for commitments with Washington and free enterprise.

In the nineties when I used to go to visit my extended family in Bogota, much was said about Antanas Mockus, who was rector of the Universidad Nacional and then Mayor de Bogotá who went so far as to show his buttocks before a hostile audience in public. Many children like to laugh about that and the authority with a surname that sounds like 'mucus'.

The Mockus anecdotes were invigorated with each new eccentricity: to appear disguised as superhero, to get married in a circus, using mimes on the streets, etc. However, today this singular character appears, according to surveys, as the favorite to win the second round in Colombia.

The lack of a true parliamentary bloc and even a party (the Green Party that nominated him is just a small marginal device that has gotten conceited with its extraordinary advance).

In some ways he reminds of Fujimori. Both are children of two immigrant parents who have become governors. While Fujimori was the first president of Japanese origin worldwide, Mockus is the first son of Lithuanians and Lithuanian-speakers who could rule a nation far from the land of their ancestors.

Both appear as 'outsiders' who are cast in the midst of a great historical trap. In 1990, the alliance of the traditional right was not convincing while the Social Democrats and the Peruvian left were discredited by hyperinflation and violence. In this vacuum, Fujimori is the technocrat who managed to slip in between the popular fear of the conservative 'shock' and discredit everything that smells of the left.

Twenty years later Mockus appears in neighboring Colombia as another afffable academic with an industrious and anti-system image. He tries to squeeze through the wear of eight years of Uribe and a self-paralyzed left.

Fujimori in Peru two decades ago and the current Colombia Mockus repeats the question that the left is divided between a wing that promotes an 'armed struggle' that cannot take power (the same one, although it has some social support, also generates a lot of rejection in the population) and one that does all it can to differentiate themselves from the guerrillas to the point of identifying with the state and the FFAA (with which it is diluted in the center and loses bases).

Mockus the phenomenon is a result of several facts.

First, Uribe is not allowed to run so that, paradoxically, he avoids being able to finish like Fujimori to end up provoking a popular rebellion against his having a third term.

Second, the possibility has been aborted that there would be voting between two wings of Uribe: the official one (Santos) and another of their semi-conservative allies (Sanin). It appeared that this could happen immediately after the general elections on March 14, but that did not materialize as conservatism lost weight with internal divisions and they don't appear as a refreshing alternative to the politics of continuity.

Third, because the center cannot repeat the polarization that occurred in past presidential elections (2006) between them and Uribe. In part this is due to confusion and internal fractures of the Polo Democrático. In the elections of 2006, Gaviria Pole wanted to give the image of being the 'third force' that would draw strength from the clash between Uribe and the guerrillas, but after that the 'moderate' Petro assumed the leadership of the party seeking to give the Polo a shift to the right that ended by removing his edge. In condemning the traffickers and the FARC as equals, calling for the strengthening of the state and the armed forces and the challenge to Chavez, Petro was alienating some of his social base while losing the center identity.

In the midst of a situation in which no polarization was happening between the two versions of Uribe, between a 'hard' Uribe and a center-dull 'soft' it appears Mockus filled a gap having also clearly had the power to ally with the other two former mayors of Bogotá (Luis Eduardo Garzon, Enrique Peñalosa).

Mockus's triumph is not secure, but his progress expresses a broad sector of the Colombian population (especially in cities) who want a form of change, but not too radical from the current course.

Mockus keeps several of Uribe's pillars (TLC with U.S., American troops in the Colombian barracks, continuity of 'democratic security' anti-FARC and privatization), but would seek to renew a system accused of being riddled with so much fraud, corruption and drug traffickers.

Chavez has warned that a possible Santos government could bring a war with Venezuela. A possible Mockus administration, however, could help a new center-right opposition grow less severe but more cunning and perhaps more effective within the ALBA countries.