Why Don't They Publish Us?

From The Guardian and The New York Times to The Washington Post and Reuters, I've submitted several op-ed pieces and articles to the world's mainstream media outlets and newspapers over the past years. All of my submissions were responded identically: "Rejected"! 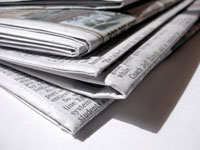 Why Don't They Publish Us?

Intrinsically, it's an ambition of every journalist to reach out to a greater audience, achieve more exposure, make progress and improve his portfolio. Putting aside the primary motive of being renowned as a reference of public attention, the journalist aims to elevate his own viewpoint and advertise the way he looks into different matters as a precise and rectified account. The journalist is primarily looking for ways to exalt his own interpretation of stories and inculcate the reader a supposedly reliable, accurate analysis of a certain incident which is presumably "what he believes".

Thinking of methods to expand his coverage, journalist's principal purpose is to get in touch with the global audiences, instruct them on the basis of his own mindset, advocate a certain philosophy and denounce the other scopes of thought. This is actually how the journalist accomplishes his mission regardless of his ideological and reflective belongingness.

The inherent mission of a journalist is to enlighten the public opinions, help them distinguish the right from wrong and encourage the value of critical thinking. Although the journalism of 21st century has become an instrumental mechanism of disseminating falsehood, launching black propaganda and psychological warfare, the foremost responsibility of a journalist is to tell the truth even at the cost of his own defeat.

Anyway, I haven't come this long way to advocate the principles and fundamentals of journalism and sermonize about the basis of ethnic journalism; neither have I come to enumerate the responsibilities of a decent journalist and itemize his duties in respect of the public opinions. What I would like to discuss is the reasons why "they" don't publish "us". So who are these "they" and who are those "us"?

"They" are the chained, corporate media outlets whose interests are intertwined with together. "They" are the news networks, websites, magazines and journals who are afraid of the other side of story, so "they" prefer to withhold it from the public or distort it the other way.

"They" are the media outlets who are wise enough to recognize the difference between "nuclear energy" and "nuclear bomb", and that's why they use them interchangeably while translating the speeches of Iranian President.

"They" are the media outlets who are courteous and considerate enough to refer to the American President as President Obama and call the Iranian President "the hardliner".

"They" are the media outlets who feel free to run the most insulting and offensive cartoons about the Prophet of Islam whom some 1.5 billion people around the world venerate and glorify, because the "freedom of speech" allows them to do so. Interestingly, the same "freedom of speech" disallows them to publish a cartoon questioning the veracity of holocaust or an interview with a German political prisoner who has been jailed for 7 years simply due to his "visa overstay"!

"They" are those who are affluent enough to finance the Arab media outlets in the Middle East to drop the name "Persian" off the term "Persian Gulf" because they know that the magnificent civilization of Iran is interweaved with the honorable history of Persian Gulf and Iranians are sensitive about this.

So, who is this "us"? It is us, who can't turn a blind eye to the atrocities of a racist regime whose existence is hinged on killing, destroying and devastating. It's us, who can't keep silent, remain indifferent and unconcernedly tolerate the offensive massacre of Palestinian people in the most brutal way. It's us who can't digest the double standards of the hegemonic superpowers. Why should the United States who has dropped hundreds of nuclear bombs on the heads of people in Hiroshima and Nagasaki and seized the lives of millions of innocent people impose financial sanctions on Iran which is trying to develop nuclear energy for civilian purposes? What's the fault of millions of Iranian people who are in dire need of special types of medicine which should be imported from the European countries? It's us, who can't call these unilateral and crippling sanctions a respectful homage to the so-called virtue of human rights; if these medicines are not imported to the country, millions of "human beings" will be exposed to the risk of death; it's us who want to call the hegemonic powers to minimally respect the "human rights" which they've invented themselves.

It's "us", who don't classify people on the basis of their color, race, religion or nationality. We don't consider the black, impoverished Africans to be socially lower or less important than the sumptuous, well-off whites in the Northern Europe. We don't call the Muslims terrorist altogether simply because an irreligious, American-manufactured pawn named Osama Bin Laden carries out terrorist attacks all around the world. Who is unaware of the extensive relations between the families of George W. Bush and Osama Bin Laden? Who can demonstrate that Bin Laden is a practicing Muslim? Who can demonstrate that he says prayers during the day and takes fast in the month of Ramadan? Who can rule out the possibility that Al-Qaeda is an American-funded group which is established to portray a brutal and inhuman image of the Muslims all around the world?

It's "us", who don't reiterate the obsolete threatening sentence of "all options are on the table". Unlike President Obama and his affiliated media outlets including, among others, Fox News and Voice of America we don't threaten any country of a nuclear strike and don't stage a propaganda project against any nation to demoralize them 24 hours a day.

There are countless differences between "they" and "us" and that's why they'll never publish something which is written by "us". The other side of story has to remain obscured and unrevealed routinely. It will not be a privilege for them to discuss something which is "out of context" or out of "popular interest", so it's not that much of a surprise to receive emails, telling us that "we receive many more submissions than we can publish; thank you this time, but we may regret that…"

In their eyes, our writings always contain a hoard of grammatical slips, factual errors, contextual deviations and whatever of the writing gaffes and inaccuracies you may visualize. That's why they don't publish us.