49 Years Since the Bay of Pigs: The Cuban Revolution Survives

Thomas Jefferson claimed that Cuba should be part of the United States of America. Since then, the USA has never given up in a policy of isolation, intrusion and cruelty against the Cuban people. Harry Targ, a US student at the University of Illinois during the academic year 1960-61 makes a review of US policy towards Cuba. 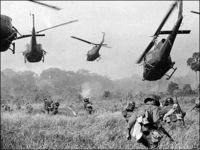 I was a student at the University of Illinois during the 1960-61 academic year. Like so many of my generation, I was modestly curious about the Cuban Revolution which had occurred a year earlier. I worked in the cloak room of the student union with two fellow students who were counter-revolutionary Cubans. We argued all the time about the revolution. If only Castro would hold elections they said, we would support whatever candidates prevailed.

I had read a short piece in The Nation during the fall of 1960 warning of a group of anti-Castro Cubans training for a military intervention. I had put that out of my mind until my fellow cloak room workers began to talk in February, 1961 about “something (that) was going to happen.”

I also remembered going to a student organized panel on Cuba that included my cloak room colleagues and other counter-revolutionaries. There was one student (the panel had seven participants as I remember) who defended the revolution. It was clear that the defender of the revolution was not liked by the others.

I went to work on April 17, 1961 to discover that I would be covering the cloak room alone. It seems that one of my Cuban colleagues scheduled to work with me that day had gotten in his car and driven to Miami, apparently ready to join the second wave of what became known in the U. S. as the Bay of Pigs invasion. On that day 1,400 anti-Castro Cubans invaded Cuba at a place known as Playa Giron. Days before air attacks on Cuban airfields were carried out by unmarked U.S. planes, but President Kennedy chose not to provide air support when the invasion occurred because the world would think the U.S. was behind the invasion.

The invasion, planning for which began in the Eisenhower Administration, was cooked up by the Central Intelligence Agency. The CIA argued that once an invading force landed on the island, the Cuban people would rise up to overthrow the new government. The folly of that assumption was experienced personally by me when I saw my cloak room Cuban friend return to work about three days later. By the time he reached Miami by car the invasion had been crushed. There was no spontaneous uprising.

The Bay of Pigs invasion of 49 years ago is commemorated every year in the municipalities of La Habana province. One report refers to this year’s celebration as marking “the first defeat of imperialism in the Americas.”

Historical research makes it clear that the United States was opposed to the revolutionary movement led by Fidel Castro and Che Guevara well before the revolutionaries marched into Havana in January, 1959. When Eisenhower realized that Fulgencio Batista was vulnerable to defeat, the president desperately sought a replacement who would not threaten U.S. banking, tourist, and sugar interests on the island.

President Eisenhower, deeply troubled by Castro’s victory, refused to meet with the Cuban leader when he came to the United States in April 1959. Over the next two years U.S. and Cuban actions and reactions deepened the hostility between the superpower and the island nation. These included the opening of Cuban relations with the Soviet Union, the refusal of U.S. oil companies to refine Soviet oil, and the Cuban seizure of the refineries. Dramatically the U.S. ended the purchase of Cuban sugar and Cuba responded by nationalizing U.S. banks and other businesses on the island.

In March, 1960 Eisenhower directed the CIA to begin planning for an invasion of the island carried out by counter-revolutionary Cubans. The Eisenhower team had successfully ousted from power both Iranian Prime Minister Mohammed Mossadegh 1953 and Guatemalan President Jacob Arbenz in 1954. He probably thought a move on Cuba could lead to a similar success.

When President Kennedy assumed office in 1961, the CIA presented the new president with the Bay of Pigs invasion plan. During the fall 1960 presidential campaign Kennedy had criticized his presidential opponent, Richard Nixon, for allowing Communism to come to Cuba. So JFK’s support of the invasion was no surprise.

After the failure Fidel Castro declared Cuba a Socialist state and President Kennedy declared that the U.S. would not rest until the Cuban regime was ousted from power. Kennedy fully institutionalized the economic blockade against Cuba that still exists today.

Revisiting the Bay of Pigs invasion after 49 years suggests some historic features of U.S. foreign policy and decision-making style.

First, as admirably described by Stephen Kinzer in Overthrow, the United States had been engaging in efforts to undermine and overthrow independent governments around the world, and particularly in the Western Hemisphere, ever since it took Hawaii in the 1890s. In fact, the Cuban revolution of 1898 against Spanish colonialism was usurped by U.S. forces followed by a full-scale occupation of the country, then indirect economic and political domination, lasting until 1959. The U.S. imperial vision regarding Cuba goes as far back as the era of the founding fathers. Thomas Jefferson, among others, had declared that Cuba ought to be part of the United States.

Second, as so many accounts of U.S./Cuban relations suggest, the interests of the Cuban people never figured in U.S. policy toward the island. The economic blockade and diplomatic embargo of the island has amounted to a fifty year effort to strangle, not only the regime, but the Cuban people. Others must be forced to sacrifice for the U.S. imperial agenda.

Finally, the Bay of Pigs fiasco suggests that U.S. foreign policy decision-makers almost always misjudge the will of the people who would be subjected to military action. Ruling classes, by their very nature, are unable to understand the interests, passions, and visions of the great masses of people. The Director of the CIA and other members of the President’s inner circle were incapable of understanding that the Cuban people supported their revolution so they ignored State Department polling data.

The United States continues to make these mistakes virtually everywhere.