The New Strategic Game for Global Domination under the New START 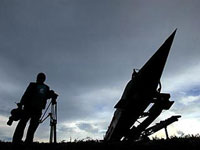 The New Strategic Game for Global Domination under the New START

Contrary to the conventional spinning in mainstream mass media, the recent signing of the strategic arms reduction treaty between the United States and Russia in Prague on April 08, 2010 (to replace a previous treaty, the old START, which expired three months ago, that is, the end of 2009) reinforces a new global strategic game in the post-Cold War era, in five major ways (as explained below).

These five major ways of the new global strategic game are to preserve the current system of global domination by the nuclear powers that be, albeit unequally --, but this game is embedded with a lot of wishful thinking (as explained below).

Under the new treaty, both the United States and Russia “have the 95 percent of the world's nuclear weapons,” as China was quick to claim in an article on the People’s Daily website on the same date of the signing. Surely, the figure by China can be subject to debate, but the point here is that, although they reduce about a third of their massive nuclear arsenals, many of these reduced weapons are redundant and useless in the post-Cold War era anyway -- nor does it diminish the global monopoly of nuclear weapons by a few nuclear powers on Earth, albeit unequally.

The Nuclear Security Summit held in Washington, D.C. on April 13 (just a few days after the signing) did not address this most fundamental problem (and was set up more for public relations, with which President Obama is well-known for his obsession, than for problem solving at the substantive level, not at the symbolic one).

There is a good political reason for President Obama’s obsession with public relations, because many people do not know that he remains one of the most polarizing political figures in substance, both at home (like the way he rushed the health care reform bill into law, without a single supporting vote of the Republicans and without the majority support of the public, and in spite of their fierce opposition) and abroad (like the ruthless surges he carried out in Afghanistan and the unending war in Iraq, with daily killings of innocent civilians) -- while masterfully playing the “bipartisan,” “peaceful” messages in public appearance. This new treaty (to favor the global monopoly of nuclear weapons by a few nuclear powers on Earth, while condemning others like Iran trying to have a nuclear program but allowing Israel to have nuclear weapons) shows once more President Obama’s ruthless polarizing tendency in political substance (but holding the “bipartisan,” “peaceful” image in public appearance).

Secondly, the new treaty allows the two powers to shift their resources for upgrading the quality of their nuclear weapons instead.

To maintain a massive nuclear arsenal is very costly (besides being useless in the post-Cold War era). Therefore, a good motivation for the two powers to reduce their nuclear weapons is to save the resources for the more important task of upgrading their nuclear weapons. For instance, President Obama already approved a defense budget for this year which includes funds to research on, and develop, more sophisticated and powerful nuclear weapons. Like his predecessors, Obama has no intention to eliminate American nuclear weapons but only to get rid of the redundant ones and to upgrade the remaining ones -- very much what his generals had asked him all along.

Thirdly, the new treaty also reflects a shift of focus, this time, on the more advanced building of the strategic missile defense system, which has been actively pursued by the United States (and, to a lesser extent, by other powers) to neutralize the effectiveness of the missile arsenals of one’s potential opponents.

For instance, the decision by Obama to install missile defense systems in Romania, Poland, and even Bulgaria (as an aggressive way to target Russia’s missile arsenal) has much angered Russia. Of course, the official rhetoric of the United States is that the system is to defend against the imaginary (or fictional) missiles from Iran (but in reality it has nothing to do with Iran at all). This propaganda (for public consumption) can only fool the ignorant public, but not the military experts in Russia (who know quite well what the U.S. is trying to do to them).

Fourthly, the new treaty also reveals a growing interest in building a new generation of weapons, especially for the United States, which can strike any country with this new generation of new missiles at any time within a few hours, without increasing the numbers of its nuclear weapons.

For example, the United States is working on a new generation of “hyper missiles,” which can strike any target on Earth within a few hours, as part of the U.S. plan for “global military supremacy,” as reported by Rick Rozoff on August 22, 2009 and Robin McKie on November 14, 2004.

And finally (or fifthly), the new treaty also gives the major powers (especially the United States) the pretext to stop nuclear proliferation by any other states which are not pro-American (while supporting some other states to have nuclear weapons -- like Israel, Pakistan, and India, which are more friendly to the U.S. but hostile and violent to their neighbors).

A good example is Iran, which is accused of pursuing a nuclear program with the ultimate aim to build nuclear weapons. The United States (under the Obama administration) and its allies (especially Israel) are trying to prevent Iran from getting the bombs by any means, including technological and economic sanctions, political interference in Iran’s internal affairs (like stirring up the clashes between the opposition and the government), secret operations to sabotage Iran’s nuclear facilities (like the supply of faulty parts, erosive materials, and explosive components) and to eliminate its nuclear experts (like the assassination of the top Iranian nuclear physicist Masoud Alimohammadi and the arrangement of another, Shahram Amiri, to defect to the West), and other dirty works. In the meantime, those neighboring states in the region which are “friends” of the United States (like Israel, Pakistan, and India) but enemies of others are allowed to have nuclear weapons.

Surely, this polarizing global strategic game of dealing with nuclear weapons has made a lot of the have-nots unhappy; thus, this new strategic game for global domination has a strong dose of wishful thinking. The desire to possess nuclear weapons among the have-nots will not be curbed, as long as the few nuclear powers on Earth are allowed to monopolize them and to threaten (and blackmail) others which do not have the weapons.

This anger among the have-nots is all the more intensified, because, as long as the widespread killing and suffering in the world as a result of chronic Western invasion, bombing, devastation, occupation, or interference in other states (like Iraq, Palestine, Afghanistan, Yemen, Somalia, and others around the world), under the leadership of the United States, continues --, there will be further efforts to resist this new strategic game for global domination. The current spread of the global networks of al-Qaeda is an excellent illustration of this anti-imperial resistance in the post-Cold War era, which also includes the attempt to smuggle nuclear materials whenever and wherever possible. And this is all the more so, when one remembers that the United States is in relative decline and is no longer as powerful as it once was in controlling the world.

Even worse, some nuclear powers themselves have time and again used different weapons of mass destruction on the have-nots, with devastating consequences to the poor folks in those countries. This is a form of what I call "state nuclear terrorism," this time undertaken by powerful states against the relatively weaker ones – as opposed to what I call “individual nuclear terrorism.”

A good example involves the United States, which dropped atomic bombs on Nagasaki and Hiroshima, and almost all those who get killed, often in the most horrific way, were civilians, which constitutes one of the most horrific war crimes in history. To this day, the United States is the only country on Earth which has ever used atomic bombs on others.

Later, the United States continued to use different weapons of mass destruction against the Vietnamese during the Vietnam War (like the use of Agent Orange), against the Pacific Islanders during the Cold War (like the hundreds of nuclear tests, with devastating consequences to the health and environment of the natives, due to their massive radioactive effects on the natives living nearby for many generations to come), and later against the Iraqis during the invasion of Iraq (like the use of depleted-uranium, or DU, weaponry). As a superpower, the United States have got away from these crimes with impunity, time and again. I already extensively documented and discussed cases like this in my 2004 book titled “Beyond Democracy to Post-Democracy” (in 2 volumes), together with many other issues across the board, in the most comprehensive analysis of the deeper sides of democracy that mainstream mass media and sociopolitical institutions do not want us to know.

One sober fact which has not been much discussed in mainstream mass media is that Western powers, under the leadership of the United States, have never invaded, bombed, or occupied a country which has nuclear weapons. Time and again, they target those which are weaker and have no nuclear weapons to defend themselves.

It is not absurd to think the unthinkable, in that, under certain circumstances, only when the weaker states are allowed to possess nuclear weapons, there will be more peace on Earth, as powerful states will have to think twice before they ruthlessly invade, bomb, devastate, and occupy a weaker state whenever they feel like. A good example is North Korea, which now have the nuclear bombs; it will be more difficult for the United States to be willing to bomb North Korea. Does anyone notice that the United States already treats North Korea with more deference than before, because it now has the bombs?

The new strategic arms reduction treaty between the United States and Russia will not contribute to a durable peace on Earth, since it aims, with a lot of wishful thinking, to preserve the current system of global domination by the major powers that be, albeit unequally -- at the expense of the weaker ones, for the five reasons as indicated above.

Even then, the global balance of power among the major powers is also facing a different challenge, as it is quickly changing towards a different direction that the world has never known, namely, of what I originally proposed as the “post-post-Cold War era,” or the world of “hyper-empires,” in my 2007 book titled “Beyond the World of Titans, and the Remaking of World Order.”