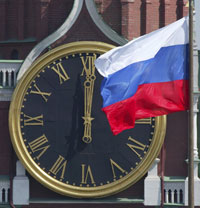 Russia is in a pickle. Declining populations, simmering ethnic tensions, and a loss of competitiveness in the global community are challenging Russia’s leaders to rethink the country’s regional and global strategies. Its recent announcement of a new military and economic alliance with France harkens back to the waning years of the 19th century, when Prussian muscle-flexing in Europe encouraged a similar Franco-Russian relationship. More recently, following the reunification of Germany after the 1989 Berlin Wall collapse, Russian leaders along with others in the region have shown some trepidation about a stronger, more forceful German state. Both President Medvedev and Prime Minister Putin are keen to carve out a more central role for Russia on the world stage, but geographic realities pose severe challenges to their ambitions.

Internally, the geographic structure of Russia has long created significant governance and communication issues. Just recently, the central government announced it was cutting out two of the country’s eleven time zones. Medvedev explained the reasoning for this decision in clear geographic terms: “The less fractional division of the country will enable us to resolve a number of transport and communication issues, increase manageability of the territory, and strengthen the position of Russia as an important chain in the world’s global infrastructure.” Moreover, as the recent bombings of the Moscow subway highlight, Russia still is challenged by significant political differences within its national boundaries. From Chechnya to Siberia and North Ossetia to Komi, non-Russian peoples make up about 20 percent of the country’s total population, with many of them yearning to free themselves from the influence of Russia's central government.

To the east, China is investing in new infrastructure at a dizzying pace. High-speed rail, mega-dams, globally connected cities, and other initiatives are reshaping China’s economic geographies in ways that challenge Russia’s influence in the region. Even in the Winter Olympics. China has surged past Russia in overall athletic performance! With the 2014 Games scheduled for Sochi on the Black Sea, Medvedev has stated bluntly that finishing outside the top tier of medal winners is unacceptable.

On Russia’s southern borders, ongoing struggles in Afghanistan, Iran, Iraq, and the Caucasus pose both security and economic challenges. Kamil Landa, a political scientist, has described this situation as “the ring of anaconda” along Russia’s southern borders that is suffocating the country. He argues that Russia needs “scientific research, complex analysis and forecasting of the geopolitical situation in the Caspian region to resist the plans of the West to institute control over the ‘heart of the world’.” Medvedev and Putin see Iran particularly as a rising regional power. Although Russia has tired of Iran’s inflammatory Islamist rhetoric, its ideological anti-Americanism, coupled with strategic economic and geopolitical interests, is unlikely to encourage any significant interference with Iran’s nuclear ambitions.

Along the Western front, Russia faces an expanding and muscular European Union and NATO. This reality, in part, is a reason for Russia to cozy up to President Sarkozy in France and develop a new Franco-Russian relationship. From a geopolitical perspective, the expansion of these blocs into territory once part of the former Ottoman Empire or Bessarabia causes significant consternation in Russia. Expansion makes little strategic sense from a Russian point of view unless the goal is to isolate Russia and return to the old Cold War policy of containment. Little wonder, then, that Russia responds with force and by using the resources it directly controls, because it cannot compete with the West from an economic or propaganda standpoint.

Flexing one’s global muscles can be productive at times and can create significant geopolitical benefits if done right. In Russia’s case, such flexing might also lead to heightened tensions and conflict with its neighbors and with the U.S. Therefore, rethinking both the role and geographic extent of Russia’s global ambitions is more important today that at any time in the recent past. The U.S. would do well to remember that a conflictual relationship with Russia likely will damage both parties quite seriously.

David Keeling is a member of the American Geographical Society’s Writers Circle and Professor of  Geography, Western Kentucky University, Bowling Green, KU 42191-1066, USA. He can be reached at [email protected]