“They Don't Give a Rat's Ass Except for the Money” 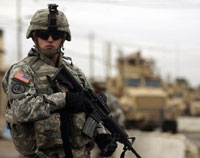 Thanks to the work of Howard Altman of Tampa Bay Online, we now know that US Army 1/LT Brian Brennan is alive and well and pursuing life’s challenges with vigor. Brennan was the driver of the Humvee in which the late Michael Bhatia, a civilian Human Terrain Team member and Brown University graduate, was riding when it ran over an IED. In death, Bhatia was lionized by the US media for his contributions to the global US war effort, while Brennan received nothing close.

Brennan survived but his injuries required that both legs be amputated. According to Altman, “ Brennan, 23 at the time, knew something was wrong, but canceling a meeting is taboo in Afghan culture, so he drove on. He had a mission: to safely deliver a team of civilian operatives charged with reaching out to locals and learning more about the village's culture and needs. The Human Terrain team Brennan was delivering is a key component of the U.S. counterinsurgency strategy of fighting the Taliban and al-Qaeda by winning over the hearts and minds of the Afghan people.”

Observers indicate that Brennan received faulty cultural advice and that, among other factors, may have contributed to the incident. Based on available information, the HTS casualty rate currently looks like this:

Don’t Give a Rat’s Ass

“Honestly, the Human Terrain System is just a good old boy system of retired colonels who care only about punching the time-clock and financial gain. They don’t give a rat’s ass about the people downrange. They only care about selling the program,” said a source.

“The crap that goes on in the HTS program is unbelievable. There is a double standard for civilians and military personnel. Women and other minorities are treated like shit,” said one observer. According to one source, if the military complains about issues with civilians like poor performance, it can affect their own performance evaluations.

In one instance, according to sources, a posted note was place on a prospective HTT candidate’s paperwork with the words “no more of these people.” The applicant happened to be an African American. Other observers indicate that there are no African Americans in positions of “real authority.” “There have been a few African Americans placed in purely symbolic positions of responsibility but they didn't last long.”

In another instance, an HTT member was allegedly double-dipping by billing the US government for HTS work when it turned out that he was “grading papers and writing for the university that employed him too.”

Other dysfunctions have emerged. Apparently, one HTS employee has been in Iraq for 14 months and “needs a psychological examination” said an observer. “He ran off a lot of good people.” That individual, (and a local Iraqi) was allegedly caught in the theft of ammunition and other goods and arrested by MP’s. “HTS management just blew it all under the rug. Apparently, HTS management decided to keep him and let him work by himself.

“Nobody cares about the HTS program,” said sources. They pointed, again, to fraud, waste and abuse specifically fudging “comp time and overcharging based on no work product.”

“Look, it rarely takes 24 hours to produce a report. On occasion, maybe, but people are billing for work they did not do. Some of them just surf the Net all day and claim that as a report,” said an observer.

In reality, there is no such thing as an HTS reach back operation said a source. “If we need something on a Friday night out of Fort Leavenworth [HTS HQ], forget it. At times we are 24/7 and they never are.”

According to one source, HTS management continually orders high-end items like video recorders and top-of-the-line computer gear for use in Iraq and Afghanistan. “It's all useless crap. We don't need that gear and we've sent some of it back. What we need are simple items like paper, staples, paper clips, pencils. It's obvious what HTS management is doing and it's all political: they want to spend all the line item money so they can go back to Congress and ask for more.”

One has to wonder that if HTS is a “key component in COIN” why US COIN leaders continue to applaud the dysfunctionality of HTS. Some say these are “glitches” and are part of a new program and that “everyone knows there's corruption and ramp-up woes so what's the story.”

The story is that corruption and the degradation of standards has become acceptable in many corners of American society. That it has happened in the US national security arena is a grave danger to the nation and, as HTS shows, the lives of people downrange.

An “I Didn't Do It Pontius Pilate” attitude appears to be the new American mantra whether in this tiny HTS program or in the board rooms of American business. Perhaps US government/industry/academia should turn Human Terrain analysis inward to figure out what has gone wrong with American culture.

Maybe that US Army officer conducting the HTS AR 15-6 investigation will make a start.