Obama and the End of Patience 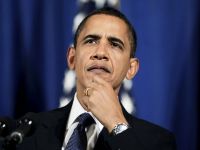 Obama and the End of Patience

There is every reason for pessimism about the problem of Palestine. Israel, under the hardliner Netanyahu, is willing to defy Washington. The nullified Joe Biden, vice president of the United States, was not repaired properly by the government of Israel. The position of Israel seems to harden, despite the harsh admonitions on the part of Biden and Hillary Clinton. Obama’s patience appears to be coming to an end. But Israel plays with a gross psychological factor, to hint, in a roundabout way, that the current president of the United States of America is a Muslim and, ultimately, an enemy of the Jews.

The American journalist Roger Cohen, commenting on the conflict between the current government of the United States and the radicals of Israel, quoted a bold sentence initiated by Netanyahu: "Israel and the United States have mutual interests, but we act according to the vital interests of the State of Israel. " According to Cohen, "The United States also has vital interests," which include the existence of two states, Israel and Palestine, side by side, but "this solution is eroding every day, with the continual building of Jewish settlements on territory that should belong to the Palestinians."

By the way, Cohen repeats a conversation he had with Ronan Nachman, mayor of one of the largest of such settlements, the Ariel. Nachman said, with candor and determination, that there will never be a Palestinian state and the territory for him will have to be divided between Israel and Jordan. In a cartoon, published by the daily Maaravi, also cited by Cohen, Netanyahu shows Obama in a cooking pot, in a typical African cannibal scene of preparing dinner. It is very significant to show a "white" cooking a black man. This can suggest many things.

It is unlikely that things will go so far as to convince the right wing of Israel, especially those that control their armed forces that they need to change their attitude and accept sincere peace talks with the Palestinians. Their strategy seems to be to erode the willingness of the Palestinian resistance, cajole world public opinion and to expel these people from their historical territory.

President Lula benefited from a time shortage, stopped from visiting the grave of Theodore Herzl, the Hungarian-Jewish journalist who, living in Austria, in 1897, founded the World Zionist Movement. According to some sources, Herzl, before fighting for the creation of a Jewish state, was immersed in militant Germanism, the cause of unification of all German states - which would later be one of the highest goals of Hitler.

It is important to remember that the Zionist movement since the beginning was financed by wealthy Jews, opposed the effort of many Jewish communities, who, escaping the vicious persecution that they suffered in Slavic countries, wanted to be added to the communities that welcomed them (especially in America), so as not to be differentiated from humanity as a whole, except in their religious services. The Zionist movement contained this aspiration.

In Brazil, we don’t have problems with the Jews. We can talk about racism against blacks, but it is difficult to guarantee what exists, except only in isolated cases, manifestations of anti-Semitism in our country, as there are in other countries. Lula may well, on behalf of our authority on the subject, discuss the problem with the authorities in Israel with the Palestinians and the Iranians. When he says "it isn‘t really the case," he not only expresses his personal conviction but rather the general feeling of the Brazilian people.

The only way to peace is from within the population of Israel. On the day when most Jews in Israel and their supporters throughout the world, know that the safety of their people depends on the security of the Palestinians, there probably will be peace and relaxation throughout the Middle East.

To each capitulation of the world's great on the expansion of Israel, the situation becomes more difficult, but in order to avoid even greater a tragedy if external pressures will stimulate the growth of internal opposition, that several Jewish organizations work for peace.