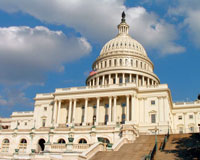 “Consistent with section 202(d) of the National Emergencies Act, 50 U.S.C. 1622(d), I am continuing for 1 year the national emergency declared on September 14, 2001, in Proclamation 7463, with respect to the terrorist attacks of September 11, 2001, and the continuing and immediate threat of further attacks on the United States. Barack Obama, The White House, September 10, 2009.”

“Let us no longer blind ourselves to the undeniable fact that the evil forces which have crushed and undermined and corrupted so many others are already within our own gates. Your Government knows much about them and every day is ferreting them out. There are also American citizens, many of them in high places, who, unwittingly in most cases, are aiding and abetting the work of these agents. I do not charge these American citizens with being foreign agents. But I do charge them with doing exactly the kind of work that the dictators want done in the United States.” Franklin D. Roosevelt, 1940

Alert! The National Security State is not the result of conspirators or plotters.

The successful, but ad hoc, development of the US National Security State (NSS) was never in doubt. The speed with which it came into existence, a mere 70 year timeframe, was accelerated by the clash of unpredictable global and domestic events and the political and military environments created by Republicans and Democrats in response to those events. Threats of invasion by foreign powers were to be feared with the same nervousness as a domestic banking crisis or a recession. One has to wonder if civilian leaders are even up to the task of governing particularly when the American electorate that puts them in power is so ignorant of the world beyond their borders. Life is far easier in a NSS, not having to think about the world in which one lives.

The US NSS is not a draconian military state nor is it some off-shoot of Chinese State Model. The US National Security State is a tolerant capitalist decentralized state. By any measure and from any vantage point, one can see, hear and feel its influence in many diverse fields such as sports, architecture, literature, entertainment, fashion, the media and finance (the latter a part of the nation’s critical infrastructure that can’t be allowed to fail). The distinct instruments of US power are described in the US Army’s Special Forces Manual by the acronym DIMEFIL: Diplomacy, Information, Military, Economic, Finance, Intelligence and Law Enforcement. The DIMEFIL section followed by explorations of history and culture are quite simply exceptional and more informative than any comparable text authored by civilian pundits and professors. Those distinct DIMEFIL venues were once separated by clear dividing lines usually indicated by civilian and government demarcation points. Now, in 2010, those divisions have vanished and it is nearly impossible to differentiate national security from the act of shopping at Wal Mart which, in its own way, supports the national security economy.

In Arsenal of Democracy by Julian Zelizer, Franklin D. Roosevelt’s radio address to the American people in December of 1940 is set as a starting line for the NSS. And while many argue that the country was far more militarized prior to that date, the confluence of advances in technology (many from the military), globalization, and political environments that WWII would create (East vs. West) ensured that national security would entrench itself in the consciousness of the American people. And it was, arguably, in the 1940’s, that the entertainment industry and politicians began the process of deifying US military personnel setting them above and apart from politics and society. In short, the military became untouchable and a powerful interest group to be courted by politicians and industry. Viewing the sanctified military outside of the scope of daily political and economic machinations would turn out to be a major threat to civilian political dominance (Republican and Democrat) over the military and the industries that allied with it. How could one be a critic of the military gods one created?

Roosevelt deftly used a banking crisis—the Great Depression, in which 75% of Americans were employed—to ignite a national security consciousness even “in the girl behind the counter.”

“This is not a fireside chat on war. It is a talk on national security, because the nub of the whole purpose of your President is to keep you now, and your children later, and your grandchildren much later, out of a last-ditch war for the preservation of American independence and all of the things that American independence means to you and to me and to ours. Tonight, in the presence of a world crisis, my mind goes back eight years to a night in the midst of a domestic crisis. It was a time when the wheels of American industry were grinding to a full stop, when the whole banking system of our country had ceased to function. I well remember that while I sat in my study in the White House, preparing to talk with the people of the United States, I had before my eyes the picture of all those Americans with whom I was talking. I saw the workmen in the mills, the mines, the factories; the girl behind the counter; the small shopkeeper; the farmer doing his spring plowing; the widows and the old men wondering about their life's savings. I tried to convey to the great mass of American people what the banking crisis meant to them in their daily lives.”

The NSS is America’s response to a world where the only certainties are the political and economic challenges posed by the nations of the BRIC (Brasil, Russia, India, China), fierce geopolitical competition for markets and resources, the movement of institutions like JP Morgan and Citigroup (banking arms only) away from organic investment in the USA, and a Cold War mindset that sees the encirclement of China and Russia by missile defense system as a necessity. Eisenhower’s admonition to beware “the military industrial complex” is a dusty cliché from a bygone era not applicable to the realities of 21st Century America. Indeed, arms sales are a key component of the US NSS ensuring a continued American presence in countries around the globe

It could not have been otherwise. The NSS was inevitable. The US policy and strategy making apparatus has no experience existing in a competitive global market of many equals. Corruption, unaccountability and interest group influence on the civilian side of the checks and balances system has left Americans and the world cold to the pre-meditated performances of congressmen, senators, judges and the president. Who’s out there that knows what’s going on in the world? Who is in charge? The Combatant Commanders, for one.

It’s no surprise that it takes the CENTCOM Commander General David Petraeus’ hand to force civilian, sometimes elected, US officials to get out of the pockets of the powerful Israeli lobby or at least view the CENTCOM AOR through the eyes of America’s interests. And it was General Stanley McChrystal who set political and military policy for Afghanistan campaign dismissing the US civilian leadership’s plans. “In London, Gen McChrystal, who heads the 68,000 US troops in Afghanistan as well as the 100,000 Nato forces, flatly rejected proposals to switch to a strategy more reliant on drone missile strikes and special forces operations against al-Qaeda. He told the Institute of International and Strategic Studies that the formula, which is favoured by Vice-President Joe Biden, would lead to "Chaos-istan".

Given that the USA NSS spends roughly $3.3 trillion dollars (US) annually on national security isn’t it time to reflect that reality in a new US Department of National Security and a retooled National Security Apparatus? ($3.3 trillion includes CIA, NSA, Department of Homeland Security, NSS elements in Departments of Agriculture, Commerce, Interior, etc.; State & Local). The 1947 national security structure needs changing along with the elimination of duplicative departments like the Department of Homeland Security. NORTHCOM should have the DHS function and all critical infrastructure functions located in all other federal departments.

It’s time to get the President of the USA out of the CINC business. A US CINC position should be created, by some form of constitutional process, with a uniformed military commander in the lead. The US CINC would report to the SECDNS who reports to POTUS (as advisor only). The Directorate of National Intelligence should be eliminated. As the DNI is a political position and POTUS would be out of CINC role, DNI is not needed. The US Department of State would be consumed by the Department of National Security. With a budget of $56 billion (US) and its roles and missions swiftly being overtaken by COCOMS and troops on the ground (cultural ambassadors now), DOS has been reduced to an international chamber of commerce.

So America has reached the stage of a NSS in which there are no dividing lines between national security functions, corporate sales or choosing between a 9 or 7 iron on the golf course. But as Janine Wedel warns in her book Shadow Elite: “What in the United States is symbolized by Government Sachs [fusion of public and private power] does not appear altogether different from the merging of state and private power that characterized both communism and post-communism.”