Not that long ago, Victory Day raised no questions at all. It was a great holiday of a great country that has won the fight for its independence. The Great Patriotic War was a tragic and heroic event in Russian history. 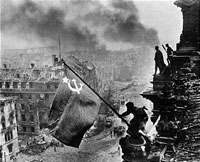 Yet, some time ago, we were introduced to open genocide towards Russians, bashfully covered with the labels of “democracy” and “liberalism.” Russian history is being mutilated carefully and intentionally. Great historic figures are presented as murderous monsters, and “martyrs” who suffered themselves but did not make Russia’s enemies suffer are being canonized.

Until recently, misinformers did not touch the topic of World War II and the victory just because it was useless. The holiday is so great that no one would notice their yapping. But the veterans are getting smaller in numbers, and those who were kids during the war are disappearing as well.

Now we hear increasingly more of unbridled smearing directed at those who defended Russia. They use all kinds of tricks, hoping that people will believe at least some of their stories. They do not want us to think that Russian people have won the war. The myths about the victory are mushrooming, and range from “the war was won after a miracle-working icon was flown around Moscow in a plane” to “murderous KGB staff” who made “Russian slaves” fight in the war.

What is behind these fairy tales?

The victory in the Great Patriotic War is the only historic event that unites the Russian people one way or the other. This means that propaganda slogans like “we fought for a wrong thing” are against this unification. People clearly understand that our predecessors fought in that war, and defeated those who encroached upon Russian lands and tried to enslave the Russian people.

Almost all of them suffer from Russophobia. They say they were oppressed in the USSR, were forced to build hospitals, factories and schools on Russia’s money; that the nasty totalitarian regime contributed to the population growth, etc. In a nutshell, Russians have to repent in their sins, and most importantly, pay for them. Just the other day some committee in Georgia calculated that Russia owes Georgia a great deal of dollars.

In the meantime, Latvia and Estonia hold annual parades of the former legionaries of the Latvian legion Waffen SS, and members of the Parliament and other officials participate in these parades. Visvaldis Latsis, a member of Latvian Saeima , is openly proud to be an ex- Waffen SS legionary.

In June of 2009, the Parliamentary Assembly of Organization for Security and Cooperation in Europe accepted a resolution equating Stalinism and Nazism and appealing for international condemnation of totalitarian regimes. The same resolution suggested introduction of The European Day of Remembrance for Victims of Stalinism and Nazism.

It is significant that the document postulates the “uniqueness of holocaust,” but completely forgets that it was “Stalin’s totalitarian regime” that has saved Jews from indiscriminate slaughter by Hitler, sacrificing the lives of millions of Soviet people. Western Europe forgot that it was England, France and the US that have cultivated the Nazi monster by sending it to the East and disrupting creation of the European system of Hitler repel. It was Stalin’s Soviet Union that created the Anti-Hitler Coalition.

It is not a secret that Nazi symbolic is banned in Europe, and even an attempt to dispute using gas chambers in the genocide of Jews can cause criminal liability (see relatively recent case of D. Irving). Meanwhile, ceremoniesof ex-castigators are officially held in Baltic countries. At the same time, these countries prosecute people over eighty who used to catch collaborationists in the woods.

Latvia ’s Prosecution office has been investigating the activity of former Jewish guerillas who fought the Nazi, since the summer of 2006. Recently, INTERFAX reported that the Prosecution office intended to collect information about the former prisoner of Kaunas ghetto Joseph Melamed, who fought against German occupants in World War II. Currently, the 85-year old veteran is residing in Israel, where he serves as a leader of the Association of Latvian Jews. A number of members of Latvian Saeima called for a pre-trial investigation of the Association of Latvian Jews and its leader for slander towards “participants of anti-Soviet resistance movement.”

Only in December of 2009, the World Congress of Russian-speaking Jews (WCRJ) made the following statement: "As of now, no charges have been brought, and, according to Latvia’s Prosecution office, the investigation of Itshak Arad has been terminated. However, the introduction of another guerilla into the investigation indicated that it continued. From the moment of the collapse of the USSR none of Nazi accomplices in Lithuania have been punished for World War II crimes.”

Boris Spiegel, WCRJ‘s President, made a clear statement during his address at Berlin conference “Lessons of World War II and Holocaust: "If the leaders of certain countries turn Nazi monsters into heroes, it means that they intentionally justify Nazism."

In Europe, a couple of words can make you criminally liable, while some countries officially praise castigator who prosecuted those who were clearing the country from Nazi thugs who were happy to do “dirty jobs” for Hitler. Only when they shamelessly attempted to demand that Israel assisted them in prosecution of guerillas who fought against German occupants, they were called down.

We can also think about Ukraine where ex-President Victor Yushchenko issued a decree that honored Ukrainian Sich Riflemen. This division was formed in Austria-Hungary by ethnic Ukrainians specifically to fight against Russia. In the spring of 1915, riflemen battled Russian divisions, and during the Civil War they fought against the Soviet power.

Prior to leaving the office, Yushchenko has signed a decree that made Bandera a national hero for "advocacy of the national idea and struggle for the independent Ukrainian state.” In 2007 he made Shukhevych, the leader of the Ukrainian Insurgent, a national hero.

It makes for an interesting picture: in the rest of the “civilized” world Nazism is virtually banned, while it is not the case with the countries that border Russia.

Irrational fear of strong and powerful Russia is the reason behind scandalous escapades of radical politicians. They have nothing to be concerned about. As long as their actions are aimed against Russia, the “civilized world” will turn a blind eye to their pretentions statements, ridiculous requests, and open flirting with Nazism.

In December of 2009, UN General Assembly overwhelmingly adopted the Russian draft of the resolution condemning glorification of Nazism, including Waffen-SS veterans, and desecration of monuments to fighters against Fascism. The document was supported by 127 delegations, 54 countries abstained, and the USA was the only country to vote against the resolution. Interestingly enough, delegations of Georgia, Ukraine, Moldavia, Estonia and Latvia abstained from vote, as well as all EU countries.