People Who Live in Glass Houses Should Avoid Throwing Rocks

The host of the recent summit between the EU and Russia, Swedish Prime Minister Fredrik Reinfeldt, whose country holds the EU presidency, on Wednesday took a swipe at Russia over its human rights record. 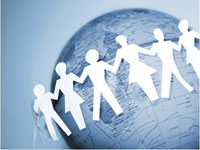 People Who Live in Glass Houses Should Avoid Throwing Rocks

"We exchanged views on human rights, the rule of law and democracy in Russia, especially the situation for human rights defenders in Russia," he said.

"This is an increasing cause for concern," he added.

However it must be pointed out that the European member states have their own serious problems with violations of human rights. According to statistics published by the European Court of Human Rights in its most recent annual report, Russia ranked twentieth among the 47 States Parties to the European Convention on Human Rights in allocated cases per capita, well below such entirely European countries as Slovenia, Romania and Poland, and on par with Luxembourg and the Czech Republic.

In fact the human rights records of certain European states have been getting progressively worse. For example, the number of cases allocated in the European Court of Human Rights against France doubled between 2007 and 2008, bringing France's per capita rate to within 40% of the Russian statistics.

While the Charter of Fundamental Rights of the European Union was adopted in 2000, respect for the Charter rights by European member states has remained entirely voluntary and unenforceable.

One of these fundamental rights, memorialised in Article 50 of the Charter as well as in Article 4 of Protocol 7 of the Convention, is the principle of ne bis in idem. Loosely speaking, this is the right not to be tried or punished twice in criminal proceedings for the same alleged offence.

The European Council has dithered for nearly over ten years on measures to strengthen legal protection for European citizens against failure by the member states to comply with this fundamental right.

The problems that may arise under the current legal regime are well known to human rights attorneys. The European Commission itself published a Green Paper On Conflicts of Jurisdiction and the Principle of ne bis in idem in Criminal Proceedings in 2005; however, such was the level of concern expressed by the Member States in response to the Green Paper that legislation based on the Green Paper has yet to be drafted.

Indeed the entire matter apparently languished in the shadow of European structural reform ever since the 2003 initiative of the Hellenic Republic (Greece) with a view to adopting a Council Framework Decision concerning the application of the principle of ne bis in idem, an initiative that was soundlessly rejected.

The failure of the EU to grapple with the inability or unwillingness of its member states to cooperate in criminal prosecutions has led to the most serious violations of this principle, with the result that increasing numbers of people are tried and convicted by the courts of a member state after they have been finally convicted or even entirely acquitted in the courts of a different Member State of the same material facts in the sense accepted by the European Court of Justice and memorialised in its 11 February 2003 ruling in Cases C-187/01 and C-385/01, Hьseyin Gцzьtok and Klaus Brьgge [2003] ECR I-5689.

These are all persons who should not have been tried a second time. Some of them are doubtlessly facing imprisonment on the basis of their second trial after having been found innocent.

One of these victims of the lacuna in European law is Dr. Emmanuel Lazaridis, a Greek citizen and professor of statistics.

Dr. Lazaridis was convicted by a French court of having committed a crime with respect to which a Greek court had already held him to be innocent, in a final and executable decision that was not appealed, six months prior to the French proceeding. Not only were French authorities aware of the Greek proceeding, they were also aware of an earlier decision by the competent Greek court which had held that the French and Greek proceedings were based on the same material facts.

After conclusively being declared innocent by a Greek court, the Court of Appeal of Lyon, France subsequently declared him to be guilty of the same crime, sentencing him to one year immediate imprisonment and a fine of 3,000€.

Serious violations of fundamental human rights in the EU, such as the persecution and conviction of the innocent Dr. Lazaridis, should not pass unnoticed by Russia and fellow states parties to the European Convention on Human Rights.

The French Ministry of Justice has refused to intervene in the case of Dr. Lazaridis, referring to the tradition of separation of powers to justify its lack of concern.

Not even in European law does there currently exist any means to undo a direct or intentional violation of the principle of ne bis in idem by a European member state.

O n 5 November 2009, Dr. Lazaridis submitted a petition to the European Commission requesting that a Decision be addressed to the member states to address this serious lacuna in European human rights law.

The Commission is required to act on Dr. Lazaridis' petition within two months if it is to avoid litigation before the European Court of Justice that may substantially erode what sovereign authority remains with the European member states.

The petition requests that the Commission propose a Decision to the European Council to cover two scenarios of fundamental importance to people who find themselves fighting the same criminal charges in two or more member states.

In one scenario, there already exists a judgment issued by a competent court of a member state which specifically finds that one or more of the charges brought in different member states are materially equivalent. It is proposed that the requested Decision should directly effect the principle of ne bis in idem on the law of the case by declaring that all penal determinations of a judicial nature related to the charges that have been determined to be materially equivalent and that come into effect following the entry of the first final penal order in the case shall for all purposes be automatically null and void.

However, European countries have jealously guarded the last vestiges of sovereignty remaining with them in certain areas, especially in matters concerning criminal law.

Consequently Dr. Lazaridis is preparing for a long and difficult struggle. He is asking members of the European Parliament to support his petition, and has brought the matter to the attention of the highest levels of the Greek and French governments.

The caseload of the European Court of Human Rights demonstrates that serious violations of fundamental human rights occur much too often in the member states of the European Union.

Russia would do well to remind its European partners of the old saying that people who live in glass houses should avoid throwing rocks.