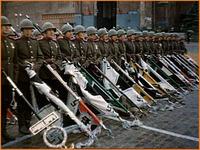 August 23rd, 2009 marked 70 years since the conclusion of the treaty of non-aggression between the Soviet Union and Germany, known as "the Molotov-Ribbentrop Pact." Soon the 70th Anniversary of the start of the Great Patriotic War will be upon us, so this is a proper time for reflection and clarification.

The agreement is not without considerable controversy and it has been used to serve as a pretext for intense criticism and attacks against Russia by those who wish the war would have turned out otherwise. Many elements in European countries actually fought on the side of Hitler and participated in the aggression against the USSR. They seek not only to whitewash their own sordid, despicable behavior, but also to whitewash history and make it seem like, “Well the Germans/Nazis weren’t so bad after all. In fact, maybe they were heroes.” How disgusting!

In fact, the behavior of the current European Union members might suggest the attempt to create a Fourth Reich. They consistently approve of (wink-wink, nod-nod) fascist demonstrations, memorials, statues, glorifications and tributes.

They feign indignation at this agreement while totally ignoring the Munich appeasement with Hitler that took place a year earlier and gave Hitler the green light to do as he wished. The agreement was most certainly not a catalyst for the beginning of the war, it started with Munich and their own appeasement. Therefore, there is no basis or justification for this criticism against the USSR. In looking back at the agreement, one has to assess what it did for the interests, safety and well being of the USSR and her people, and no one else. .

The Soviet leadership knew that it was necessary to delay the war touching Soviet territory for as long as possible so that adequate preparation could be made. It was rightly assessed that the aggression and invasion were inevitable.

The western countries had deliberately tried to block Russia from negotiations or to form a united front with Russia. They ultimately proved greatly unreliable as one country after another folded up or basically stayed out of the fray until the long and delayed action which came far too late to have any impact on the outcome of the war one way or another. The outcome of the war was already decided well before June 6th, 1944, at Stalingrad and Kursk.

There is no question that the leadership made the right decision and it can be rightly assessed as wise and prudent. The decision ultimately can be seen to have preordained the outcome of the war. In truth, it also forced the western countries to enter the war with Germany. They had no choice, even though they did sit it out for the most part. Officially, anyway, they were a part of it. Initially they had no intention to get involved.

Despite the howling, slanderous propaganda of the west and those who would appease them for whatever selfish, ill-considered reasons, there was absolutely nothing immoral or shameful in the document. It did not violate any international law. It was fully consistent with the prior practices of the international community to first and foremost look out for one’s own people and nation. No one in the west was concerned or ashamed that nearly 27 million Soviet citizens died so that they could sit back and let the USSR take the full brunt of the Nazi onslaught with very little assistance. Even today, they attempt to take the lion’s share of the credit for the defeat of fascism, when the opposite is true. How shameful is that? But they have no shame.

Let there be no more distortions of history or slander against the USSR. The USSR ultimately was the primary victor of the Great Patriotic War. The nation, the people of the USSR and ultimately all nations throughout Europe were saved from fascist slavery and butchery, from the actual extermination of their countries.

The Great Patriotic War saw the USSR become a great world power. Therefore, there is nothing for Russia to apologize for. To the contrary, it is something to greatly admire, to respect and to be proud of. On this, no one but no one can ever be worthy enough to touch Russia.

Russia must once more step up to be the guardian of civilization…no one else is capable or willing to do the job. No one else possesses the courage, spirit of self sacrifice or morality to do so. No one else is more dedicated to the preservation of international law and norms. Therefore, all efforts must be made to regain maximum power and maximum strength…economically, militarily and spiritually.