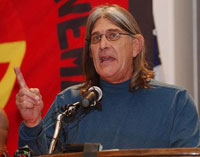 Recently neo-fascists opposed to Sonia Sotomayor, Barack Obama’s nominee to the United States Supreme Court, have argued that she doesn’t respect the “sanctity” of the law and chooses instead to be guided by her personal beliefs.

But if there is such a thing as “sanctity” of the law, why are so many Supreme Court cases decided by five-four votes split along ideological lines? Where is this concern when self-loathing Clarence Thomas uses his experiences at Yale University, not the law, to dismantle affirmative action programs, or when Antonin Scalia unethically hears cases where his political cronies are litigants. And why was there no impeachment talk when Thomas, Scalia and others of their ilk violated judicial ethics by refusing to recuse themselves in Bush v. Gore, the case that illegally elevated George W. Bush to the White House during the coup of 2000.

The reality is that Naves, undoubtedly because of his contempt for Churchill’s viewpoints, ignored the law. In doing so, however, he issued one of the most spurious, and dangerous, decisions in modern legal history.

According to the Associated Press, Naves opined that granting Churchill any type of judicial relief “would create a perception that the school [CU] tolerated research misconduct.”

But this argument is both disingenuous and contemptuous of the legal process. Jurors had already heard the case, deliberated and decided that the “research misconduct” allegations were simply a pretext used by CU’s regents to camouflage the fact that they fired Churchill because of the opinions he expressed in his essay. Thanks to the machinations of Naves, these jurors have belatedly discovered they were simply part of a show trial in a kangaroo court, and that their verdict, to paraphrase Shakespeare, “signified nothing.”

Naves also proffered the ridiculous claim that reinstating Churchill would make it harder for CU “to recruit and retain teachers.” In reality his judicial idiocy achieves the opposite. Making it easier to fire professors for dubious or pretextual reasons will certainly cause a “chilling effect” inside the classroom that will invariably impede the learning process. And this chilling effect will be even more devastating outside of the classroom, where scholars have traditionally been freer to express themselves. It is frightening to comprehend how many opinions will now be unsaid, how many essays will now be unwritten, and how many books will now be unpublished because of the fear of university retaliation. And what professors looking for meaningful careers and the opportunity to contribute to the DNA of scholarly debate will want to be shackled by this fear, knowing that tenure is meaningless, that saying the wrong thing can result in dismissal and that no legal recourse is open to them, no matter how unfairly they are treated? As Churchill’s attorney correctly points out, Naves’ ruling has not only empowered CU to fire people for exercising their constitutional rights, but even because of their “race or religion.”

Still even that wasn’t enough. Naves’ inanity went even further when he proclaimed that CU regents were entitled to the same type of “judicial immunity” that judges and prosecutors use to insulate themselves from civil liability whenever they abuse their power.

So who are the new faces of university recruitment: Gonzales and Yoo? Has the world of academia really sunk so low that lying, torture endorsing, constitution loathing war criminals are more preferable to have as colleagues than professors who use distasteful analogies to stress a point?

The answer, unfortunately, is yes. During the past few years the neo-fascist movement in America has taken control of the corporate-controlled media, dumbing down the nation with “reality” shows, celebrity “gossip,” pseudo-journalism, and an obsessive focus on sensationalism and superficiality. This, in turn, has allowed these fascists to steal elections, infiltrate classrooms, and influence policies in education. In public school systems across America, the use of random drug testing, the censorship of student newspapers, the banning of books that challenge conventional thought, and the reduction in the number of courses that inspire creativity and imagination—like music, art, theater and literature—have all served to fuel the neo-fascist ideology that indoctrination is more important than education.

Indoctrination is increasingly important to the military, industrial, and police state complexes as well as advances in technology—such as GPS tracking, cameras at intersections, DNA databases, spying by satellite, and other such devices—transform America into the “Big Brother” type of regimented nation that George Orwell feared. The less students know about their constitutional rights, the more complacent they will be as these rights are increasingly eroded.

Also, corporate fascism requires a labor pool of fearful, unquestioning, subservient cogs who believe that conspicuous consumption is freedom. Colleges and universities, where some of this labor will come from, have traditionally been places where students learned things the public schools were too reluctant to teach, and where questioning, analysis, and the willingness to challenge conventional beliefs were considered virtues, not vices. But the preferential treatment given to people like Gonzales and Yoo, and the intimidation and silencing of professors like Churchill are rapidly bringing neo-fascist indoctrination policies into college and university classrooms.

Several years ago televangelist Jerry Falwell sued a publisher of adult magazines named Larry Flynt for defamation and intentional infliction of emotional distress after an unflattering parody of Falwell appeared in one of Flynt’s publications. Although the jury denied Falwell’s defamation claim, it awarded him $150,000 for emotional distress.

In the wake of this verdict, Flynt tried to warn the public, particularly the media, about the dangerous precedent this verdict had set: If public figures could run to court and claim their feelings were hurt whenever they became the subject of criticism or satire, the right to freedom of speech would soon be nonexistent. But, because Flynt was viewed as an “undesirable person,” few were willing to listen.

Let’s not make the same mistake again. It may be easy to dislike Ward Churchill for what he wrote. But whether you agree with Churchill or not, the frightening reality is that Larry J. Naves and the regents at CU, in their desperation to demonstrate their contempt, have destroyed academic freedom as well.

And what takes seconds to destroy often takes decades to rebuild.