by Neil B. Turner 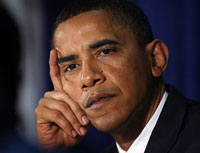 The following month, using the power of the government-developed internet (how ironic), the world’s first online Citizen’s Grand Jury was launched by American patriot Bob Campbell of AZ, and the www.AmericanGrandJury.org was born. The first group of 25 vetted and sworn jurors studied the evidence online for a week, and on 29 April they voted a ‘True Bill’ of Presentments of Fraud (eligibility) and Treason against the defendant: presumed president of the United States, Barry Soetoro, aka Barack Hussein Obama.

This was followed by 6 more online Grand Juries (to date, June 24, 2009). All have issued formal presentments of charges of Fraud (ineligibility) and Treason, and have begun to ‘Serve’ these indictments to Law Enforcement, Sheriffs, District Attorneys, Attorneys General, and District Courts all across the country. (I personally served my charges from being a juror on the May 9th, 2009 American Grand Jury, at the historic 1911 Williamson County District Courthouse in Georgetown, TX, while visiting there from CA on June 15th, 2009. My report on this ‘Serving’ can be seen here).

In the 2 ½ months since Carl Swensson’s first modern-day Citizen’s Grand Jury on March 28, 2009, there have been numerous online and on-the-ground State Grand Juries impaneled and deliberated (including TX, AR, & IL), with ‘True Bill’ indictment/presentment verdicts reached in every single one, and with over 200 ‘servings’ having been made so far. Soon there will be thousands served, too many for the press and media (Radio, Newspapers, & TV*) to ignore. Imagine the pressure on Mr. & Mrs. Soetoro (aka Obama) as they await that OMG moment when the truth that they have spent over a $million dollars to hide suddenly exposes them for the Treasonous frauds they are.
To show by example just how treacherous the American Main Stream media is, even Fox News, the "champion of truth" will not show America the truth of Obama's birth, as evidenced by their silence on the phony Certification of Live Birth and their outright lies about it:

And there is a group perpetuating this thought, and there is a culture to which you can attach yourself very easily through the Internet. We know it’s absolutely – there is no truth whatsoever – zero – to any of those ideas, yet they live within the computer and they fester in people’s minds.”

These insulting and ignorant-of-the-facts statements, broadcast publicly tomillions ofviewers by Mr. Smith, will soon come back to haunt him, when he and FNC are subpoenaed into court to show proof of the source of these outrageous statements. This year’s July 4th Independence Day celebrations should have some unusual fireworks indeed.

Suspension of Posse Comitatus/Mutiny or Treason?

On March 10th, 2009, a frightening event took place in Samson, AL, when a deranged gunman went on a shooting spree. This led to an un-constitutional suspension of the Posse Comitatus Act of 1878 (18 U.S.C. Section 1385), as a contingent of armed U.S. military forces took over the town in pursuit of this lone gunman. This blatant and treasonous violation of our Constitution and our laws was the last straw for Lt. Commander Walter Fitzpatrick, III, U.S. Navy, Retired (West Point 1975), subject to lifetime recall. So on March 17, 2009, LCdr Fitzpatrick served charges of Treason against the usurping Commander in Chief, knowing full well that if his criminal charges against the POTUS and CinC were false, he would have to be charged with Mutiny*! But if true, the usurper would have to be charged with Treason*, and if the prosecuting authorities who were aware of these charges failed to issue an indictment, they would also be complicit in (and guilty of) these acts of Treason!

* NOTE: Both Mutiny and Treason can be punishable by death.

Commander Fitzpatrick has yet to be charged with Mutiny (over 3 months later), and Mr. Barry Soetoro (aka Barack Obama) has therefore, by his silence in this matter, ‘admitted’ to the charge of Treason. Commander Fitzpatrick’s criminal charges of Treason have been served, either on their own or in conjunction with the American Grand Jury presentments, all over the country, and can be downloaded after registering here, so that each and every patriotic American can serve these charges wherever they are in the U.S. as well.
Never let a crisis go to waste

Remember the infamous words of the Great Imposter’s Chief of Staff, Rahm Emanuel when he said: “You never want a serious crisis to go to waste, and what I mean by that is an opportunity to do things that you didn't think you could do before.” Well, we have a serious Constitutional crisis here, and YOU have an opportunity to do things that you never thought you could do before: OUST the IMPOSTER! All we need is for just ONE honest and patriotic judge, anywhere in these 50 United States, to order DISCOVERY!

So when someone asks: ‘What can I, as just one person, do to help save our Constitution?’, don’t ask if it’s a rhetorical question or do they really want to know. Just send them to the www.AmericanGrandJury.org where they can click on ‘How To Serve Presentments’.

Now let’s get to work and ‘Take Our Country Back!’ One County at a Time (www.CitizensGrandJury.org).