Pravda.Ru has recently published an article American capitalism gone with a whimper which describes the present-day economic situation in the USA. This article triggered a very vivid discussion in Western media sources. We received a lot of emails from our readers and here are the most interesting of them: 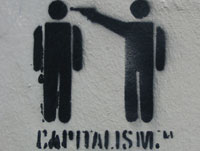 Wayne VanDerwood: “I read today the article about the United States loosing it's freedoms. This article angers me a great deal. Especially coming from Pravda.Ru. I am particularly angry that there is not a single untruth in the entire article. The very idea of printing the truth. What has happened to the world when a Russian news paper lectures Americans on liberty and is completely correct.”

Joey McLiney: “I never thought I would completely agree with Pravda.Ru. As unfortunate as it is, you are correct with everything you wrote in your article. As you accurately pointed out, it began long before the Obama-nation. However it didn't begin with either of the Bush presidencies, or even Reagan. It even predates the Russian Revolution.

In fact, the fall of the United States began with our Civil War. This, of course, ties in perfectly with one of your very correct observations regarding the substandard education system. EVERY US child is taught to worship Abraham Lincoln because he supposedly freed the slaves. Unfortunately, what too few are taught is what Lincoln said in his first Inaugural Address:

"I have no purpose, directly or indirectly, to interfere with the institution of slavery in the States where it exists. I believe I have no lawful right to do so, and I have no inclination to do so."

In fact, the destruction this horrific institution was nothing more than a collateral benefit of the Civil War.

The Civil War was actually about the rights of the individual AND SOVEREIGN states to disagree with, and in fact, leave the union. It was this freedom of succession that was (is?) the ultimate check on the United States Federal government.

Sadly, Lincoln's unwritten amendment to the US Constitution (the Civil War), no longer allows states to check the Federal government in anyway. It was this destruction of individual state's rights that leads us to the disaster we face today.

It would be very interesting if Putin provided us with a very needed history lesson. He could quite correctly point out the Russia is dealing with its Georgian state, EXACTLY the same way the US dealt with their own breakaway republics more than 100 years ago.”

Corban Wichtendahl: “I was born and raised in America, and I have been quite proud of what we've accomplished. Today, I read "American capitalism gone with a whimper" by Stanislav Mishin, and I have to confess, he is about 100% correct. I have felt great frustration with how the government has been acting during the past 150 days. President George W. Bush hurt the country by expanding governmental power, but he at least kept the country safe after 9/11. The current administration likes to blame Bush for all the evils that are currently happening, but Pres. Obama has done more to hurt America in 150 days than Bush did in 8 years. I look at 4 more years of Obama in absolute horror. Unfortunately, I go to school/work at a University, which is about as liberal as it gets in America.

I hear people bashing and laughing at anybody who disagrees with Obama or his values, then congratulating themselves with their supposedly superior wit. I want to yell at them, "Don't you get it?! It's really quite obvious!", but people seem to contently live in a stupor. Fortunately, more people seem to be getting it, and more of the quiet are starting to speak out. The recent teaparties are a great example. I hope for a peaceful revolution, and I believe there will be a revolution. However, I'm afraid that either the revolution will be violent, and/or that it might come too late.

I also very much agree with Stanislav's criticism of homosexuality. To a large extent, one can't speak out against it, however, because he would be branded a "homophobe" and be incessantly ridiculed. The slam on Barney Frank was fantastic. I would call him a weasel, but that would be
animal cruelty.”

Scott Moore: “Wow! Stanislav Mishin hits it right on the nose today (5/29/2008) with his scathing critique of Barack Obama leading America down the road of socialist ruin. Thank God that SOMEONE in the press is willing to day what the American press won't.

I must confess that when I was a kid, during the Reagan years, I was among those Americans that condemned Russia's communist government. Back then, of someone had told me that Russians would become free and America would become communist, I would have questioned their sanity. Today, I'm dumbfounded as I watch it all unfold.

Stanislav isn't the first to make this point. I have heard people here in America, former Soviet citizens, warn that we're heading in the same direction as the Bolsheviks. There are plenty of Americans who don't worship at the alter of the "Obamessiah" and hopefully we'll be able to put this brakes on this downward spiral in our future elections (provided we still have elections). May God help us all.

I'll close with a quote from an American socialist. "The American people will never knowingly adopt socialism. But, under the name of 'liberalism,' they will adopt every fragment of the socialist program, until one day America will be a socialist nation, without knowing how it happened," - Norman Thomas, U.S. Socialist Party presidential candidate 1940, 1944 and 1948.”

Dear readers! We are always open for your feedbacks. Feel free to send them to us anytime!