Some reflections on Europe's elections 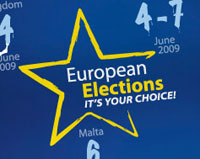 Some reflections on Europe's elections

All over Europe, voter interest in the upcoming European parliamentary elections is lukewarm to say the least. Although some 80% of all legislation in the “EU” member states is made in Brussels (seat of the European Commission and most European bureaucrats) and Strasbourg (where the European Parliament meets once a month), most voters still seem oblivious of this reality. Apparently, most Europeans continue to believe it is parliament of the nation state of which they hold citizenship, that basically holds power. How wrong they are!

Actually, most decisions that are affecting their lives are taken by the European Commission, a small group “Eurocrats” appointed (not elected!) to govern Europe. The European Parliament, elected, it is true, in a democratic way, exerts hardly any form of control over the Commission. It does (in theory) have the power of voting down the Commission in case it would commit serious political mistakes or in case it would act against the wishes of the majority in the European Parliament. However, the parliament cannot initiate legislation, which is a key democratic right.

Thus, we have the painful situation that voters actually have a chance to vote democratically for a parliament that in itself has no democratic powers. No wonder there is such scant interest, since most people realise they are being fooled. No amount of “EU” propaganda urging people to vote can remedy this. It will be a miracle if more than about 30% of the voters will actually cast their ballot. In many countries, perhaps some 20% will vote.

It is probably best to compare the European Parliament to the parliament of some 19th-century European nation before the major democratic breakthroughs of the 1880s and 1890s had been achieved.

European countries (those who are members at the same time of the “EU”, NATO, the WTO, the UN and all its derivatives) are no longer sovereign states.

-Their trade policies are determined by the WTO

-Their defence policies are determined by the US government at Washington, which dictates all of NATO's decisions

-Their agricultural, environmental, industrial, transportational and national security policies are all determined by the “EU,” especially by the European Commission.

-As for those who joined the Euro zone, even their monetary policy is no longer subject to sovereign control, as it is set by the ECB at Frankfurt.

Since the collapse of the New York WTC towers in 2001 (the US equivalent of the burning of the Reichstag in Berlin in 1933) the European Commission has heeded US demands to create a climate of fear by joining the “War on Terror”. Trampling on the democratic rights of Europe's citizens by subjecting them to the same degrading treatment as US citizens and by turning them all into suspected terrorists, the European Commission has been trying to make life miserable for all Europeans. The “EU” is well on the way to becoming just as nasty a police state as the US.

Needless to say, most Europeans are not afraid of terrorism. It is not a problem, neither in Europe, nor in the US. Both in Europe and the US, terrorism is basically a figment of the imagination. Osama Bin Laden (who I believe has just been declared dead for the Nth time), is a kind of Santa Claus, but who brings explosives, not presents. And just like Santa Claus is a messenger boy who brings presents really bought by someone else, Osama is doing somebody else's work. Santa has a white beard, Osama has a black beard. Europeans are no great believers in Santa Claus, nor are they great believers in Osama. Still, great efforts are being made to turn them into believers. With scant results. That is hardly surprising. Most Europeans also do not believe strongly in Europe.

Really, WHAT is the point of voting for a toothless parliament, whose members often have given themselves no other task than picking up their paycheck and a handsome expense account. One can hardly blame them, since they have no real political power. The moral corruption of the European Parliament is not surprising: it is the result of the fact that MEP's have no power, influence and prestige.

Most MEP's are mediocre or exhausted national politicians who have accepted political death and social insignificance in exchange for money, lots of money. According to some reports, an MEP who manages his affairs well, can become a millionaire within a couple of years. No wonder the European Parliament is a bunch of scheming opportunists.

Of course, there are some well-intentioned candidates standing for election. There are even some new parties full of good intentions of bringing about accountability and transparency. One of these is Libertas, a truly European party. However, one of their candidates, Eline van den Broek, has recently stated that torture is a necessary tool for state security!

She may be only 24 years old and she may be just a political scientist, but it is still incredibly shortsighted, if not downright stupid to make such a statement. A state that allows torture for some will in the end apply torture indiscriminately to anybody. Even if she has not learned that during her political science lessons, she ought to have come to this insight by herself.

But why bother? Since the European Parliament has no power, the parliamentary elections are really pointless.

Most Europeans do not identify with Europe in the first place. Their identification with the nation state is also becoming more and more precarious. Anger, resentment and discontent are often focused on the new groups of immigrants. These immigrants, mostly recruited from the underprivileged rural class in the remoter areas of Morocco and Turkey, are being pampered in every imaginable way. They are often lavishly subsidised, they often misbehave but are left undisturbed by the police and whoever dares criticise them is immediately branded a racist.

What few people seem to realize is that the national governments (especially those of Britain, the Netherlands, Belgium, Germany, Austria, France) actually are using these immigrants to sow discord amongst the citizens. Native Europeans are being made afraid, unsafe and insecure on purpose. Their governments want them to be afraid, because that way they can avoid losing what is left of their legitimacy. Fear has always been a great way to control the population. That is why European governments want their citizens to be afraid.

The effect of the various “EU”, US-dictated and national policies on Europe's political, cultural and social traditions is devastating. Even urban life in Europe has been traditionally based on trust, not on rules. Rules are king in the Anglosaxon parts of the world (including Britain and the US).

Most pernicious of all European policies will prove to be the use of fear as a political instrument. So far it would seem to be creating the desired results, most importantly the surprising docility of the general public. However, the politics of fear that have been determining European life during the past decade will eventually destroy Europe's social fabric. I am afraid reconstructing what is now being destroyed will prove to be far beyond the capabilities of Europe. In comparison, post-1945 reconstruction will turn out to have been a piece of cake.