WTO is poison for Russia

The EU's trade commissioner, recently stated, that the EU would not finalize a strategic trade pact until Russia joined the WTO. As the 6 th largest economy and the only industrialized nation not a part of that uber national, socialist organization, Russia is a constant reminder to all the disaffected groups around the world, such as the US and British conservatives, that no only do they not need the WTO but it is a poison that robs them of their economic and, in the end, political freedoms. 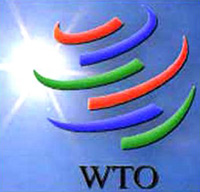 WTO is poison for Russia

Russia's economy has not only survived, but prospered under a mercantilistic protectionist system. Even this present Crisis has been relatively mild compared to most WTO members, as Russia has raised its walls and fallen back on its own companies and an internal demand to keep itself going. The lessons for this were learned after the disastrous 1990s, where Yeltsin opened Russia up to the flood of foreign goods that destroyed most Russian companies and helped plunge Russia into its own Great Depression.

Protectionism was instrumented by then President Putin and a reversal of fortune began, well before oil passed $25 per barrel. The Leftists like to "blame" oil for Russia's boom and avoid the fact that it was not until 2003 that oil prices shot off, some four years after a drastic turn around in Russia. Nor has Russia collapsed, a year after prices fell like an international banker from a high office window. The West's hatred and anger were and still are palatable, as they were first locked out of cheaply exploited Russian raw resources and then were forced to build and operate local factories in Russia , employing Russians, to continue playing in Russian markets. Even giant Western aggro business has been loosing ground as Russian farms and food companies, with protection from the state, have made great modernization strides.

This also undermines the West's control over the life of Russia and thus Russia herself., as they have had to face the starling reality that they need Russia much more than Russia needs them. This imbalance of power grows starker every year.

The EU representative Catherine Ashton, was quoted as stating: "Russia needs to demonstrate it really is keen to move to WTO accession and part of that is not imposing any new duties, which in any event damage business."

What she really meant was: damages the Western businesses, the mega international corporations, who own the governments in the West and care not a zilch either for their home countries nor for the concept of competition. They hate most of all, having to set up shop in Russia , rather then just flooding goods from their SE Asian factories.

Russia is the only major European and world economy that has stood up for its citizens, not bought into the Marxists Free Trade and has prospered. In this, she gives hope to groups of oppressed conservatives throughout the West and thus posses a direct threat to the body politic of the internationalists, who run those nations.

As we all know so well: hope must always be crushed.