Tomorrow is 25th May. The Day the Organization of African Unity was formed in 1963. It is the day when the international community remembers that Africa exists and while head-patting with derisory smugness, collectively and selfishly attempts to gain points by fostering all Africa causes while perpetuating the ills which haunt Africans. 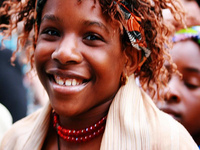 It has become “hip”, “in” and “cool”, for so many, to be seen as a champion of an African charity or NGO for the same reasons that holding a black baby, sponsoring an African child or adopting a sub-Saharan boy attracts the attention more easily than sporting some poor wretch from the slums of Mumbai, an unwanted and outcast baby girl from Inner Mongolia or any other child who has been unfortunate enough to have been born the wrong side of some frontier.

Especially so if the African child is photogenic.

But who, for instance, says a word about the Sahrawi children, or indeed the entire people of the Western Sahara, invaded and annexed by Morocco in 1976 and denied the right to statehood? Who raises public awareness about the thousands of African languages – and thereby cultures – threatened with extinction on almost a daily basis? Who cares about western governments – the same ones that had so many qualms about Saddam Hussein – cavorting with undemocratic African regimes, turning a blind eye to their appalling human rights records?

Who reads about the eleven million (11,000,000) displaced persons in central and eastern Africa, the world’s worst diplacement crisis, caused by violence in its turn fanned by outside powers who continue to wish to rule Africa through a policy of internal division, while eyeing the continent’s resources and bribing the managers of the institutions that control them? If bribery exists in Africa, it is not only because officials are corrupt, it is also because they have been corrupted.

But suddenly, it is a case of hey! It is the 25th of May! It is Africa Day! So tomorrow so many will don their Africa caps and brush the dust off last year’s notes, revamp the op-ed piece and champion the Great African Cause of 2009 (after making derisory and racist remarks about Africans during the rest of the year).

Those who do so should feel especially ashamed of the fact that the Office for the Coordination of Humanitarian Affairs (OCHA) has just released a report claiming to have received a paltry 27 per cent of the funds needed for support relief in central Africa, one third of the funds needed to create stability in Somalia, where 40 per cent of the population is dependent on food aid and whose capital city hosts half a million refugees living in the most shocking conditions.

Those who read these lines for the first time and who may feel surprised about the lack on information on Africa in the squeaky-clean daily news package they receive, should understand that those who tailor, edit and control this “information” decided years ago that Africa is to be sold as a dark and dangerous place with dark and dangerous people existing, not living, with drought, wars and famine, AIDS and malaria and corruption, ebola and more corruption. A lost cause.

Those who believe that Africa is not a lost cause but who deny that problems exist are as guilty as those who perpetuate what needs to be changed through bribery and immoral practices.

The only way to make Africa Day meaningful is to face the facts and once and for all, take action, collectively, because Africa’s problems were created not only by Africans. This process must start with the mass media doing its job and informing, not spreading disinformation and misleading the public, so that the citizens of the world can hopefully do something to help their African brothers, since it is patently obvious that generations of our leaders have done nothing to right the wrongs of slavery, imperialism and colonialism.