The Great Fears, Beginning of a New Century 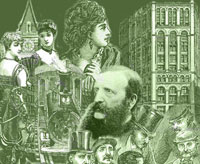 The Great Fears, Beginning of a New Century

In case you had not realized it yet, according to the Christian calendar, we are living in the third millennium. We have been doing so for some ten years. All seven billion of us here on earth. Most of us are still here, although many are dying each day, and in some areas many more are being killed each day by bombs, bullets, preventible disease and famine.

That is now ten years ago. If I recall correctly, in the mean time, we have had another scare or two. I believe a couple of comets or some sorts of rocks flying about in outer space were announced to be approaching our planet with dazzling speed, with no one actually being able to predict if a collision would take place.

Looking back into the less than recent past, turns of centuries on the calendar have consistently been followed by great, longlasting wars.

When the clock struck midnight in 1899, everything went on as usual. In 1914, however, the world was changed forever when the Great War broke out, claiming millions upon millions of young victims. In the course of the war, Europeans were shocked to find out that under the veneer of their age-old, splendid civilisation, they could still revert to animal-like behaviour. When they had run out of ammunition, soldiers in the trenches, crawling about in the mud among the remains of their comrades, would kill each other with knives, shovels, bare hands, anything at all. Why? Just to gain a few yards of terrain. Thus the new century, the 20th, was born.

The 19th century was also born out of violent convulsions, namely the Napoleonic Wars, leaving millions of dead in their wake.

The War of the Spanish Succession (1702-1713/14) and the Great Northern War (1700-1721) brought about such momentous changes in the political landscape of Europe, that these can be considered the true beginning of the 18th century. The beginning of the 17th century was also marked by extensive warfare, namely the Thirty Years' War that began in 1618. Before that, the 16th century was born with the outbreak of organized violence in the wake of the Reformation that was initiated by Martin Luther in 1517. Beyond that date, most wars in Europe seem to be more local in character, which does not mean they were less lethal. At any rate, since the dawn of the Modern Age, it ts the sound of guns fired in major European wars that seems to announce the beginning of a new century.

Thus it would seem that over the past half millennium at least, major, violent upheavals take place every three or four generations. In case our lives today are still determined by this fateful historical rhythm, it would seem that we are in the midst of an accelerating phase of organized violence.

Each wave of warfare has been preceded by a significant political event, taking place before the turn of the century visible on the calendar. The 17th century may be said to have been preceded by the proclamation of the Dutch republic in 1579, an event that was considered a mortal blow to the position of the King of Spain, Philip II, Europe's most powerful ruler. The 18th century was announced by the “Glorious Revolution” of 1688 in England, which is just another name for the conquest of that country by the army of the Dutch Republic led by William III and his elevation to the throne. As for the 19th century, it was introduced by the Great French Revolution of 1789, while the 20th may be said to have been introduced in 1890 by Count Bismarck being sacked by Germany's new emperor William II. After all, this led to a dilution of the German-Russian understanding, which was exploited by France to form an alliance with Russia. Such an alliance was precisely what Bismarck had been trying to prevent at all cost, since it would encircle and isolate Germany in the long run.

It is obvious the current new age was introduced by the Fall of the Berlin Wall in 1989 and the subsequent collapse of “real existing socialism” in Eastern Europe. Most people realized these events were momentous, but they seemed to have no other immediate result than than of a strengthening of the capitalist system, which at first seemed beneficial to most.

At this moment, we are witnessing the end of “real existing capitalism,” which is turning out to have much more in common with the system it supposedly vanquished back in the early 1990s.

So far, we have been able to observa all the parrallels with preceding turns of centuries, save one: a major, prolonged international war that creates a “new order”.

Sure enough, there are the imperialist wars begun by the US against the weak states of Afghanistan and Iraq. In terms of money outlays, these wars are not modest at all. They may be compared to the Boer War of 1899-1902, when mighty England fought the fiercely independent Afrikaner farmers, using the vilest of methods, unworthy of a supposedly civilized nation.

I am afraid in the near future we are may witness a really major international war. Everything seems to point in that direction. But most worrying is the fact that the US, the major capitalist power, is alos the one that is suffering the most. The true extent of the economic disaster in the US is certainly not being transmitted to the rest of the world, at least not by the Main Stream Media. One third of US adults are functionally illiterates, real unemployment has hit 20% but may actually be hugher than that. Perhaps 60 million people in the US (if not more) are living below the poverty line. Millions have been thrown of their homes, for not being able to pay the mortgage. Their ranks are swelling every minute. Millions of children go hungry. What is left of productive industry in the US is being dismantled further, because plants are closed for bankruptcy or because production is being taken to China or elsewhere.

The US now only retains superiority in just one field. As its armies are being decimated and demoralized in the desert wastes of Afghanistan and Iraq, as the Air Force is threatened with painful budget cuts, the main strength of the US military is its fleet of bombers (often carrier based) and its nuclear arsenal. Bombing is what the US is good at, a fact that, unfortunately, too many people around the world can testify to.

The temptation to use its last remaining military advantage may be just too strong to resist.

I am afraid the 21st century has still not begun. Perhaps that is why there are so many fears. Change, yes we can...but not the kind of change you would hope for!