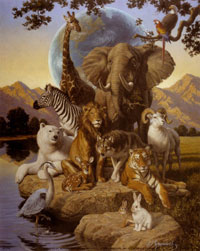 On a freeway, a truck passed me; I saw innocent ducks going to slaughter. On a country road I saw a dead raccoon in middle of the road, it died in agony. In a pound, hundreds of pets are being killed. I think about this. Was I the only one who knew of these things? I wonder what are Human beings doing? Who are we?

An ‘Anpath’ is some who has great sympathies or, more, empathies with animals, wild or domestic. The Anpath sees the suffering of animals and acts to stop it. The Anpath criticizes the Human race.

Humans are a split species of both ‘Nature’ and ‘Ex-nature’. Ex-nature is the part of us that we call the ‘human’. This includes much activity --- culture, art, entertainment, economics, government, education, communications, energy consumption, science and much more. Further, this side of us includes certain behaviors such as abstract thought leading to mathematics, morality, theology, philosophy. More activity also includes our creativity, our striving for individuality and diversity. Virtual reality and the internet are forays beyond our physical limitations.

And Exnature is both good and bad. The bad would include evil for example. Animals are not evil; we often call people ‘animals’ but actually we should call them ‘bad Humans’ – because Humans do things that animals would never do! There are positive Human behaviors and negative Human behaviors.

Our species is heading out of Nature. The natural parts of ourselves include our primitive sides, our physical needs, biological maladies and limitations, our very manifestation as physical beings, and our manifestation as individual, separate entities.

We spend much time in post-natural activity. The natural part of ourselves seems to be minor but it is actually hard to say what percentage of our makeup is natural or ‘human’.

Consider the issue of physical limitation. A major feature of our behavior is our avoidance of suffering, this is very Human. Our affluence helps us avoid suffering. With modern medicine and modern psychology we try to avoid distress and agony. Another feature is our drive to avoid death, to live longer, and to achieve immortality. We can call this behavior ‘ex-suffering’ -- from Exnature comes exsuffering. This is a cardinal trait of our personality – we seek longer life, less pain, higher quality of life. Hence, healthcare is the biggest sector of a modern economy, and is to grow indefinitely as we try to escape suffering and death. Further, our economic growth is nonstop to make life more pleasurable.

However, while we strive to escape suffering we actually inflict more suffering on Nature! Here is the irony. We exist at the expense of Nature in some respects. We destroy so that we can live, this is a fact we cannot ignore. This is the way of survival and existence in this cosmos, one species lives at the expense of others. We have come onto the scene now and we cannot delete ourselves, commit suicide.

But today the Human race has come to a new stage of evolution; we can and should begin to limit our presence on the planet and the damage that we do. The stage of balance with Nature is long over; we are no longer hunter gatherers or primitive farmers. We are now in a phase of domination, deformation and destruction.

We can destroy our home. Ultimately we are tied to Nature -- Nature within us and Nature outside of us. Nature is foundation that we stand upon, our bodies and our home. We are the strange and estranged children of Nature; we are of Nature and not of Nature. And Nature predicted this too because it begat us, we were a potential within it and it knew we would wander far away someday.

There are two distinct paths of evolution our planet, that of Nature and that of the Human.

Old civilizations disregarded matters of moral survival. Humans had no awareness of animals. They did not realize that animals live in agony; that is their fate in Nature. Human beings add to their agony with their thoughtless behavior; they think because they have gardens of pretty flowers and that they do not eat their pets that they are friends of Nature. They build walls between their world and the natural world; they never peer over thewall to see the massacre of Nature they have authored. Humans have no right to choose what animals live or die; only Nature can decide that. We have no right to interfere, only if it relates to a legitimate survival issue.

The Anpath recognizes the similarity between animal and Human. Animals like us want to survive suffering, they respond to love. We are the same.

At the same time, there is a great difference between Human and animal, Humans are living in a growing realm beyond nature, and a very important feature of this existence is to reduce suffering. Exsuffering is unique to Humans, only we create a world of less suffering, only we can do this, only we are fundamentally driven by this need. But animals, they live in Nature and suffering is their fate. Nature is suffering; Exnature is ex-suffering. And it is so disturbing to see Humans build up their world of exsuffering without a care for Nature, in fact, greatly increasing the suffering of Nature. Does this have to be, that the exsufferer has no compassion for the sufferer, that humans have no compassion for Nature?

To “Co-Genio” (co-create) is the only path of physical and moral survival for the Human race, to respect the parallel creativities of the various lines of evolution in the cosmos.

Human is different from Nature, we have culture, art, morality, science, myths and dreams; we are driven by different needs and impulses -- creativity, immortality, spirituality, the endless evolution of ethics. But Nature and Exnature can be in relative harmony in Co-Genio where the Human respects and protects Nature. The alterative is, of course, extinction. So we have no choice, but then again accepting this is a choice too.

The relationship between Human and Nature is not without conflict for we are two very different forces and powers.

Co-Genio reflects our true reality; we are seeking a relative harmony with Nature; our balance with Nature is dynamic because we are under a non-stop evolution out of Nature. We sustain our relationship with Nature because Nature is our sustenance; our fundamental nourishment comes from the world. At the same time, we want to distance ourselves from Nature as far as we can, as we pursue the “unnatural” things such as culture, art, scientific investigation, spirituality, morality, self growth, longevity and immortality. This is our strange and contradictory fate.

We can live with Nature, and we can modify our evolution down the human path by limiting and reducing our impact. Or we can dominate our home and easily destroy it.

Nature is a monstrous power though it is not infinite; the powers of our planet are finite in the great cosmological scheme. But Nature can rob us of environments, oceans and seas, the air we breathe, hospitable climates, farmable soil and more.

Our alienation prevents us from rebinding with Nature, our culture distracts us from our environment, our rationalism keeps us bottled up in a world of abstract thinking, our disconnection keeps us removed from Nature, our lack of identity keeps us from appreciating animal identities, our unhealthy individualism keep us focused on ourselves, our lack of creativity prevents us from solving problems of Co-Genio with Nature. When Human beings do not solve their spiritual and psychological problems, Nature suffers.

Awareness of suffering in Nature and the delicate nature of Nature is our only salvation. Co-genio is the only viable path for the Human species. Exnature must stay linked to Nature to understand it and protect it; ex-suffering must comprehend suffering to appreciate what it is, so that it can avoid inflicting suffering on the world. Thus, we must have a program as a race to stay in direct touch with Nature, and stay in direct touch with its suffering, so we do not lose sight of our greater reality, so we do not lose sight of the very foundation upon which are odd evolutionary journey rests. Suffering is the foundation of Exsuffering.