World War 2: The debate goes on

It has been 64 years since the end of the Great Patriotic War, better known in the West and the rest of the world as World War 2, but the debate over the victory and its debasement has never been stronger or more ruthlessly waged. It is time to set things straight. 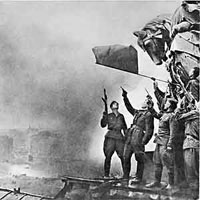 World War 2: The debate goes on

First we will work through the favorite Myths that the West loves to use against Russia.

Myth 1: Poland was the first victim of the Nazi and Soviet regimes.

First of all, let us set the stage on Poland. Between 1918 and 1924, Poland invaded all of its neighbors with the exception of Germany. It was an aggressor before it even became a fascist state, in the military coup of 1926, which made it, after Italy, Europe's 2nd fascist state. Poland invaded Ukraine twice, first against the nationalists and then against the Soviets. It also invaded Belarus and took from it and Ukraine the western provinces that were then reoccupied by the Soviet Union post Poland's fall to Germany in 1939. Poland also invaded Lithuania capturing and holding Tallinn. It invaded Czechoslovakia but was beaten back. Finally it invaded and captured several key villages around Danzig, which were in neutral League of Nations enclaves.

During the wars in Ukraine, the Poles massacred somewhere between 500,000 and 1.5 million Russian POWs that they had taken.

Poland further ran concentration camps for Orthodox Christians, while it burned them out of its Ukrainian and Belarus provinces, since they refused to convert to Catholicism. Thus it is no surprise that Poland had no qualms about backing and allying with Hitler in 1937 and 1938 when the Nazis moved to dissect Czechoslovakia. Hitler, in the Munich Conference of 1938, represented not only Germany's claims on the Sudetenland but also land claims of Hungary and Poland. The falling out came when Hitler demanded that Poland should now join him in his crusade against the Soviets. Being sated, the Poles saw no reason to wage war on their borders and refused. Thus Hitler's drive for revenge.

It should further be noted that it was Polish nationalists who ran the concentration camps in which tens of thousands of German civilians died in 1946.

Myth 2. The War Turned On the Normandy Invasion

Easiest to disprove. By the time the Western Allies landed in Normandy, the Red Army sat on the Vistula in Poland and were 100km inside of Romania, having just destroyed the German 6th Army for a second time (first being Stalingrad).

Myth 3. The Main Fighting was on the Western Front

While not to disparage the veterans and the dead who fought at Normandy, Americans point to the 10,000 or so dead they took as a giant sacrifice. Of course this is ridiculous by the standards of the Patriot War. On Mamayev Kurgan, the hill overlooking Stalingrad (Volgograd), over which both sides fought for 2 months, had 60,000 bodies littering it, about half from each side. That is, those were the bodies that were not buried to deep by artillery, to find.

It is a simple fact that 8 out of 10 German casualties, most of the Hungarian casualties, half of the Italian casualties, all of the Spanish (yes they sent the Blue Division), Finnish, Romanian, Bulgarian and many of the Croatian casualties were on the Eastern (Russian) Front. Simply put, the West never had the stomach for the casualties that were taken by all sides of the Eastern Front, but it has no whims, especially through Hollywood, to try to steal the credit that was earned in rivers of blood.

Myth 4. The Red Army committed mass suffering upon the German population, while the West treated them well.

Of the eight million German civilians who died during World War 2 (8 million compared to 20 million Soviet civilians), 6 million died from US/UK bombs, as the two systematically incinerated each and every single German city in a drive to exterminate the population. How many additional civilians died from direct fighting and artillery bombardments, on the Western Front, is unknown. It should be noted that in 1943 there was a lively debate in America about the whole scale extermination of the German race, which was seen as to barbaric to live along side with.

Bombings would come in 3 waves, first with iron bombs, in which one in four had a variable timer detonator that could explode up to a week or month or longer later to kill returning civilians. Once lots of ruble was created, phosphate fire bombing started. A fire storm was created that would reach up to 6km into the air, sucking oxygen out of bunkers or incinerating the civilians hiding, from the heat of the fire storm. Finally a wave of anti-personal bombs to catch fleeing civilians, fire crews and medical staffs. These would continue for up to three or four days over an individual city.

Then there are the million or so German troops who died in open fields, under the elements, after surrendering to US and French forces. Instead of POW camps, they were taken to open fields, surrounded by wire and left to freeze. Others were worked to death. This continued well into 1946.

Besides this, there are the issues of mass rapes of Italian civilians by British colonial troops, who decided to sow their seed anywhere they landed in Europe.

Myth 5: America won the war against the Japanese almost single-handedly.

Outside of the fact that British, Australian, French, Danish and Indian forces tied down over a third of the Japanese army both on the islands and throughout SE Asia, through out the duration of the war, an accomplishment, without which the US victories on the islands would have been impossible.

The Chinese also tied down a huge amount of Japanese forces, as well as various local tribal contingents, who did their part.

However, Japan's biggest defeats were from the Russian army. That's right, these were no Iwo Jimas where some 30 or 40 thousands Japanese were holed up on an island and surrounded from all sides. The battles in 1939 and again in 1945 defeated two full Japanese armies in Manchuka (Manchuria) and paved first for the Japanese southern drive in 1939, thus allowing for the halting of Hitler's drive on Moscow in 1941 and then collapsed the Japanese mainland war effort with the defeat of some 500,000 Japanese forces in Manchuria.

Though these myths are insulting and invasive upon the real history of that great tragedy, it is the total revisionism of the war by several EU nations that is most disturbing. In the Baltics, there is absolute revisionism, creating heroes out of the murderers of the Nazi regime. This is not some fringe movement, but one financed and backed by the local governments.

Then there is the US/EU puppet in Ukraine, Yushinko, who openly praises the western Ukrainian SS auxiliaries as national heroes. There must be some Jews and Orthodox Christians left in Lvov some where, getting Yushinko's blood into a rage.

Similar issues have come up in Croatia, Hungary and recently in Moldova, with Romanian support.

It is time to take the many excellent Russian movies about the Patriotic War and translate them into English, German and French and launch them into the West. Maybe the knowledge will help the West avoid the same mistakes as of 64 years ago.